Calls are growing for Gov. Charlie Baker to speed up the rollout of COVID-19 vaccinations as the number of new virus cases in the state continues to rise.

Dr. Louise Ivers, the interim chief of infectious diseases at Massachusetts General Hospital, is among those urging the governor to pick up the pace of administering doses of the vaccine as the pandemic rages on.

On the US strategy: we should end each day with no covid19 vaccines in the freezer. Every day with a shot in the freezer is a day too many. @MassGovernor – please let us go faster

Ivers told Boston.com her concern — both nationally and locally in Massachusetts — is that vaccines are not being administered as fast as they need to be.

“I think everyone is really trying their best — I appreciate that a lot of thought has gone into how we should try to roll out vaccinations,” she said.

When it comes to the number of people per capita who have gotten their first dose of the vaccine, Massachusetts comes in 26th, falling behind the other New England states and New York, according to The Washington Post’s vaccine distribution tracker.

According to the most recent weekly vaccination report from the state’s Department of Public Health, a cumulative 239,174 doses have been administered since the rollout began. The state has received 347,450 cumulative doses of the vaccine.

It isn’t just health care leaders like Ivers who are pushing state officials to ramp up the vaccine distribution. Secretary of State Bill Galvin proposed in a letter to Baker that the state use local polling stations to deliver the vaccines, testing such a program by administering doses during the March elections (in municipalities such as Newton and Duxbury), according to The Boston Globe.

On Wednesday, Baker defended the pace of the state’s vaccination program, which is due to begin offering COVID-19 vaccines to individuals in congregate care settings next week.

“I do know that [in] a lot of states people who are the same age as my kids have gotten vaccinated before people who are home health workers or health care workers or long-term care workers or long-term care residents, or some of these other populations of people who have multiple co-morbidities and over the age of 70,” he said during a press conference. “Honestly, I just don’t think that’s the way we should do this. I think the focus early on should be on those who have the most to lose, or who are fundamental to our ability to take care of those who have the most to lose.”

The issue with the prescribed phases is the way they are being rolled out, not the prioritization or order that has been set, Ivers told Boston.com.

“The Department of Public Health in Massachusetts has asked everyone to hold onto the doses they have in the freezer before they move to the next phases so that everybody moves to the next phase together,” the doctor said. “When we look at our Massachusetts cases, we’re having a substantial surge in cases and our hospitals are under pressure in terms of intensive care unit beds … Let’s get more vaccines into people’s arms and just keep pushing forward and not be overly cautious about having vaccines ready in the freezer. Let’s get all the vaccines out to people.”

What the infectious disease chief said she’d like to see is that once a “plateau in appointments” is reached for a vaccine phase, the next one is allowed to begin.

Since health care workers were the first phase of the vaccine rollout, followed by emergency workers, hospital systems currently have the largest allocations of doses, she said.

“Hospital systems have elderly inpatients but they’re not included in who could be vaccinated,” she said. “So you might say, ‘Couldn’t you vaccinate with the doses you have if you come to a certain plateau?’ What you see in vaccination enrollment is always a very high uptake in the first few days or so, and then you see a steady stage of people making appointments and people coming in and people with some hesitancy, and there needs to be work done with them to ensure that they understand all the risks and benefits. And meanwhile, you could be pushing ahead with other phases.”

Doing so, Ivers said, would help move the state towards having a higher percentage — “75 percent, 80, 90, 95 percent” — of the received vaccines administered.

More “flexibility” in the state’s rollout plan would be well received, Ivers said, adding that “many” organizations and communities are capable of meeting that adjustment.

“It is possible to do things at multiple levels,” said Ivers. “I worry personally, also, about communities that are not within the catchment area of large health care organizations, community hospitals in other towns and cities around Massachusetts that are not having state organized plans for their community vaccination.”

As administered doses are sped up, calls have to continue for more vaccines to be produced to meet the demand, Ivers said.

The doctor acknowledged that undertaking such a massive vaccination campaign is “no small feat” and such rollouts take massive effort.

Yet, it is important to recognize the state is not in the situation it was over the summer, where around 200 new COVID-19 cases were reported a day, she said.

“We had 4,239 new confirmed cases in the [Monday] report for Massachusetts,” Ivers said. “So that’s why I say that every day we wait so we can ensure something — that we follow some rule set up — we’re having more and more people infected and getting sick.”

Keeping vaccines in the freezer when new cases are above 4,000 is the wrong balance, she said.

“We need to go a bit faster,” the interim infectious disease chief said.

Correction: A previous version of this story cited an incorrect percentage of vaccine doses administered in the state since the start of the rollout. 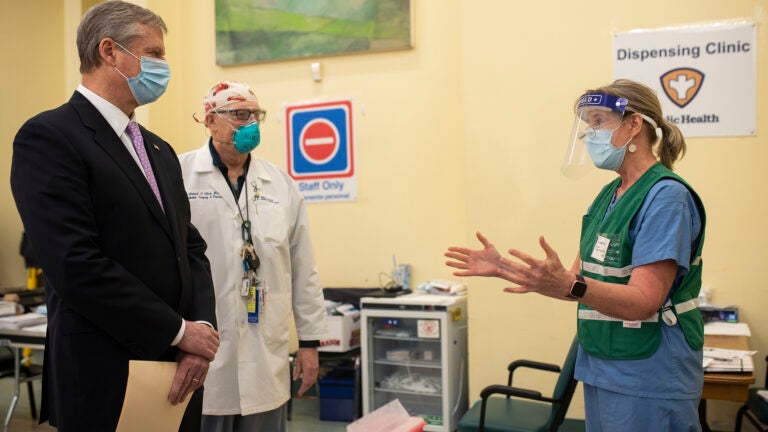