From grocery stores to pharmacies to Fenway Park, Massachusetts officials plan to make the COVID-19 vaccine publicly available at dozens of new locations around the state in the coming weeks.

Gov. Charlie Baker’s administration announced the launch of a partnership Tuesday to use CVS Health and Walgreens pharmacies for appointment-based vaccinations, as well as the state’s second mass vaccination site at Fenway Park.

The announcement Tuesday effectively doubles the existing number of general vaccination sites in Massachusetts to more than 30. And officials say they plan to add another 40 next week, including at some well-known grocery store chains like Wegmans and Stop & Shop.

For now, the new sites will only serve residents who are eligible under Phase 1 of the state’s vaccine rollout plan, which is currently limited to healthcare workers, longterm care facility residents and staff, first responders, and congregate care sites where individuals are particularly vulnerable to the disease.

However, officials have said they intend to make the sites available to broader swaths of the population as the three-phase vaccine rollout progresses.

According to the Baker administration, Massachusetts is among the first states to activate retail pharmacy vaccination at scale through the Centers for Disease Control and Prevention’s Pharmacy Partnership.

Officials said Tuesday that at least 15 CVS Health and Walgreens stores in Massachusetts will receive a total of 10,000 vaccine doses to administer this week on an appointment-only basis.

Residents who are eligibles to get the vaccine can pick a site and book an appointment here.

Officials say the first round of pharmacy locations is aimed at regions where there is currently less convenient access to vaccine sites — perhaps most notably in southeastern Massachusetts. The announcement Tuesday comes after local officials in the region, which includes several hard-hit cities, raised alarm about the potential lack of access.

Rep. Bill Keating, who represents the state’s 9th District, said his office recently contacted the Baker administration about their initial concern about an earlier map of public vaccine sites (the state also has a map of vaccination sites specifically for local first responders).

“They got back to us with assurances that there would be more widespread, more regionalized [vaccination sites],” Keating said in an interview Tuesday afternoon.

Baker’s administration says it plans to increase vaccine volume through retail pharmacies in the coming weeks — and soon it won’t just be limited to CVS and Walgreens.

Officials said Tuesday that another 40 vaccination sites will be added next week, both through the current two pharmacy chains and also local grocery stores, including Wegmans, Big Y, Price Chopper, Stop & Shop, and Hannaford.

Separately, officials said Tuesday that UMass Amherst is expanding its vaccination site, which has been limited to first responders, to all eligible Phase 1 groups.

As expected, Fenway Park will join Gillette Stadium, which opened Monday for first responders, as the state’s second mass vaccination site next month

Officials said Tuesday that the historic ballpark, which also served as a polling place during last fall’s elections, will open on Feb. 1 to all eligible residents in the Phase 1 priority groups.

According to the Baker administration, it will initially have the capacity to administer up to 500 doses a day. However, they’re hoping to ramp it up to 1,000 doses a day.

While the Fenway site is expected to stay open through the beginning of the MLB season in early April, the state’s Command Center says it’s also working with officials in Boston to set up a longer-term vaccine site in the city.

The state’s Command Center is finalizing plans for several other mass vaccination sites, which Baker says will eventually be open to the public.

In addition to pharmacies and public vaccination sites, officials say that residents may be able to get vaccinated through their employer or primary care physician.

While many health care workers can receive the vaccine through their place of work, the Baker administration also announced a “hospital depot initiative” aimed at improving access for smaller independent clinics that are unable to directly order shots, due to their size or storage capacity (doses are shipped in minimum amounts of 975 for Pfizer’s vaccine and 100 for Moderna’s vaccine, and must be stored in ultra-cold freezers).

The depot programs allow regional hospitals to receive doses on behalf of smaller clinics and either redistribute the vaccine and all ancillary materials for office-based vaccination or provide direct vaccination to health care workers. 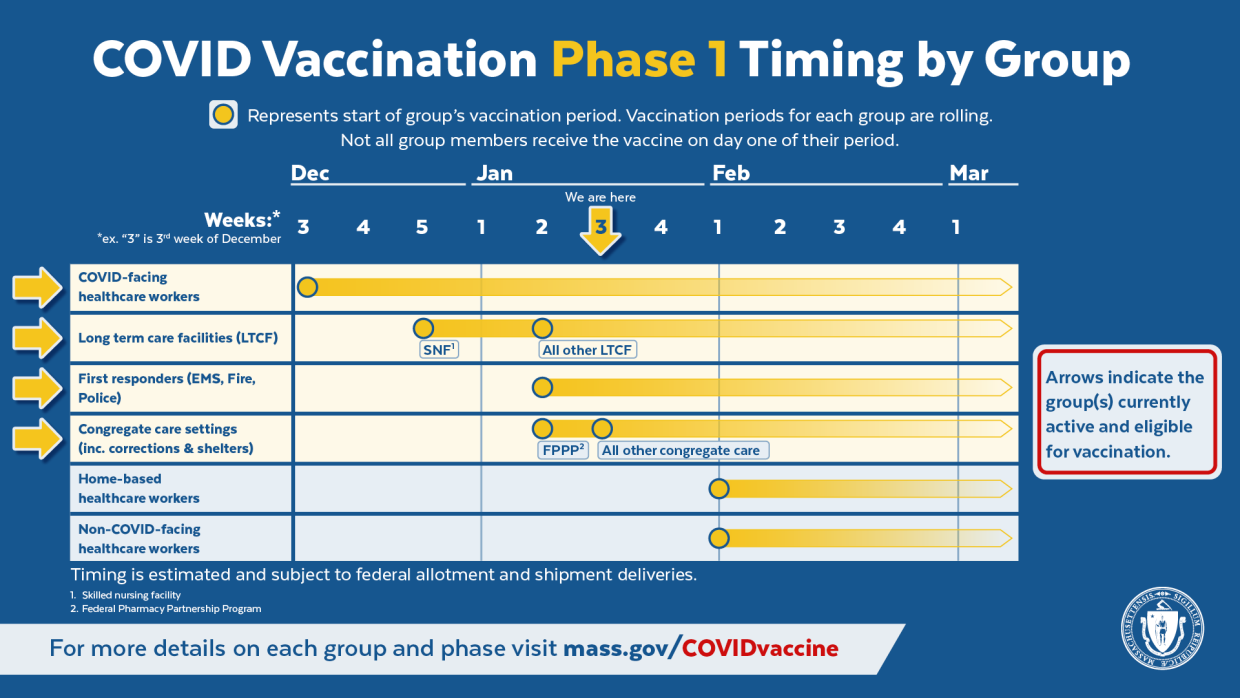 Phase 2, which is expected to begin as soon as next month, begins with residents with two or more co-morbidities making them vulnerable to complications from COVID-19, individuals over the age of 75, and low-income senior housing residents and staff.

The phase then progresses to frontline workers, such as teachers and grocery store employees, before moving to those over the age of 65 and residents with one comorbidity.

Of course, that all depends on the process, which officials admit has been bumpy early on, progressing as expected.

Some local health care professionals have urged the Baker administration to loosen its eligibility criteria to speed up the rollout, especially as Massachusetts continues to average dozens of deaths a day due to COVID-19.

Keating says it’s also incumbent on the federal government to provide more support, which he thinks has been lacking. However, the Bourne Democrat expects a more “aggressive, urgent approach” under President-elect Joe Biden, who is set to take office Wednesday. Biden has proposed a $160 billion vaccination program and urged states to open up eligibility — beyond healthcare workers and long-term care facility residents and staff — to include anyone over the age of 65 and more frontline workers.

“This can’t be addressed like the flu was, and it can’t be addressed by leaving states on their own without sufficient resources or direction,” Keating said, stressing that the benefits of the vaccine rollout are “not going to show up right away.”

With the pandemic national death toll surpassing 4,00 lives a day, Keating said residents “have to commit ourselves much more strongly” over the next month to wearing a mask, social distancing, and not gathering in large groups.

“We have to fight this on all fronts,” he said. 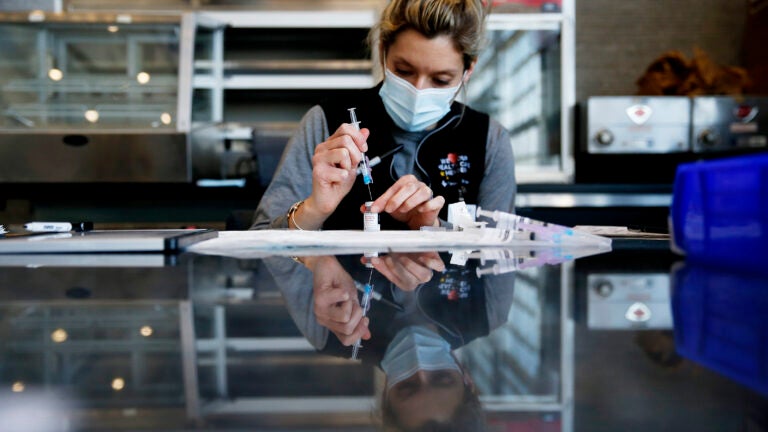