As new variants of COVID-19 emerge around the globe, vaccine developers are watching closely how each will hold up under their doses.

On the radar are new strains of the virus originating in the United Kingdom, South Africa, and Brazil — which have all been detected in the United States — and some are more worrisome than others.

“As we follow the data in the pandemic, what we do see is some of the new emerging strains are better at hiding from those vaccines,” Cambridge-based Moderna, Inc. President Dr. Stephen Hoge told ABC’s “Good Morning America” on Monday. “Now, right now, the good news is the vaccines look like they work against all of the emerging strains. That’s good news. But there are a couple … obviously, the South African one is of some concern, because it looks like it could hide from the vaccine a little better than others.”

Last week, Moderna announced the company intends to conduct a clinical trial for a “booster” shot to better combat the South African variant after its studies showed that its vaccine spurs a weaker immune response to the mutation than against others.

The company said its vaccine should still offer sufficient protection against the variant. But the lower antibody count produced by the vaccine in the face of the variant “may suggest a potential risk of earlier waning of immunity,” Moderna said in a statement.

“Our approach at Moderna is going to be to develop a booster vaccine, so that if the South African variant or any other variant becomes a concern, we’ll be able to offer a way to … prevent it from hiding from the vaccine,” Hoge  said.

Asked how Moderna is able to develop a vaccine to address new variants, Hoge said scientists are able to learn what a variant looks like because of sequencing information.

He called that “one of the great advances that’s happening in science globally associated with pandemic.”

“What we then are allowed to do as a result of our technology, mRNA, is actually copy and paste that information into our vaccine cassette, and then just start adding it to the vaccine, so that your immune system when you get the vaccine will also be able to identify the variant,” Hoge said. 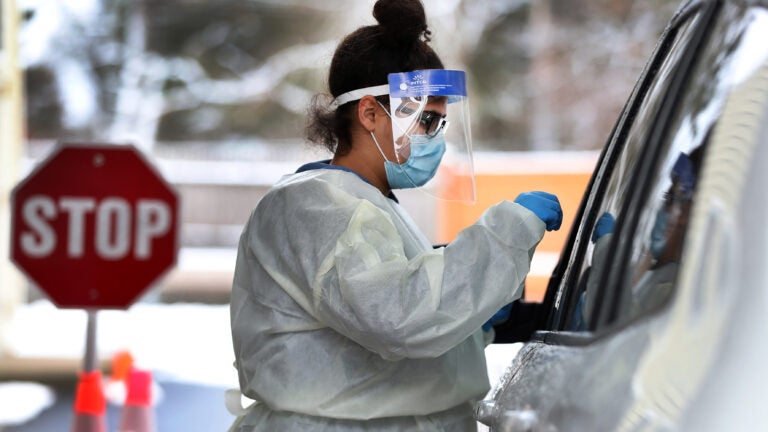 Some test positive after being vaccinated, including 2 Mass. lawmakers. Here’s why.