For weeks, Dr. Louise Ivers has been advocating for Massachusetts to speed-up the pace of its COVID-19 vaccinations. But it’s not just the slowness of the rollout that is causing the Boston doctor consternation when it comes to the state’s vaccine push.

The executive director of Massachusetts General Hospital Global Health and interim head of MGH’s Division of Infectious Diseases told Boston.com that while she’s been disappointed by the state’s vaccine efforts, she isn’t completely surprised by the sluggish and fragmented rollout based on the response to the virus over the last year.

So far, so much of what has been done with the vaccine rollout has relied heavily on large health systems, like her own, Mass General Brigham, she said.

“It’s only now that we’re starting to get some vaccines to pharmacies,” Ivers said. “East Boston Neighborhood Health Center just [Thursday] opened their vaccination clinic in Chelsea … A lot of the communities outside of those connected to large health care systems — I think really the planning for those has been far behind. But if you look at everything from the contact tracing to resourcing — I’m not surprised to see towns and cities really not prioritized.”

For communities outside those with connections to large health care systems, planning for the vaccine rollout has been “far behind,” she said.

“We do have all the resources in Massachusetts in terms of thinkers and we have the community resources, too,” she said. “It’s just that somehow, incredibly, we’re trying to catch up.”

The infectious disease chief said it’s also been hard for outside observers to get clarity on the number of vaccine doses that are physically in Massachusetts, with the state’s Department of Public Health reporting one number, which differs from those reported by the Centers for Disease Control and Prevention.

At a Friday press conference, Gov. Charlie Baker attributed the differing numbers to the timing when each of the datasets are updated.

The governor and state officials have publicly chalked up the bumps in the vaccine rollout to national supply constraints, the fact that Massachusetts is prioritizing specific vulnerable groups over larger at-risk populations, and that a surprising number of workers in health care settings had lower-than-expected uptake rates of the shots.

“Many of the employees who have not stepped forward and gotten vaccinated who work in hospitals and other healthcare settings are people of color,” Baker said of the pace of the rollout on Friday. “I want to make sure that as time goes by and as they develop a certain sort of comfort with this, that there will be vaccines available for them to get vaccinated at that point in time.”

Ivers said she’s gotten the message that the slow pace of the state’s rollout is to ensure equity.

But, citing the state’s latest vaccination report, Ivers pointed out that the effort at equity is not matching the numbers. Of those who have been fully vaccinated in the state, only 3 percent of the individuals are Black and 3.6 percent are Hispanic, compared to 45 percent of recipients who were white, according to the  Department of Public Health.

“When I think about the fact that a Black non-Hispanic man in the United States has a life-expectancy at birth of 71.3 years, when we’re pushing out now all of our attention on just over 75-year-olds, as a simplistic take, one wonders how can you catch up on the equity issue?” Ivers said.

It’s a point other Boston doctors have also called out.

Dr. Alister Martin, an emergency room physician at Massachusetts General Hospital, wrote on Twitter that having the first phase of the rollout be capped at age 75 is an example of “how you ingrain health inequities.”

Right now, folks 75 and up can be vaccinated in MA.

What is the life expectancy in Roxbury, MA, a majority Black community and one of the areas hardest hit by COVID?

This is how you ingrain health inequities.

Dr. Atyia Martin, a member of the Black Boston COVID-19 Coalition, told GBH the issues that have arisen with the vaccine rollout indicate to her “equity was an afterthought” in the planning process.

Ivers told Boston.com she believes that if the pace of the vaccine were ramped up with more flexibility to start new phases as others plateau, that some of the issues around equity that the state has seen would “settle a little more carefully.”

“It’s quite complicated — you spend a lot of operational resources and planning and logistics to make sure that you only vaccinate 75-year-olds,” Ivers said. “There’s a lot of time and energy spent on making sure that a 74-year-old doesn’t accidentally get vaccinated.”

Instead, Ivers said the state should be moving more quickly to expand vaccine access to those 65 years old and up, as well as groups with comorbidities.

According to the infectious disease physician, doing so is particularly urgent as the commonwealth continues to see between 2,000 and 3,000 new COVID-19 cases daily and as experts warn that the more contagious UK variant is expected to become the dominant source of new infections in the United States in March.

“We are in a race — a public health race and I just will continue to argue that we need to go at a faster pace,” she said.

Ivers said she’s also concerned by the narrative being circulated that the reason why the state has done poorly when it comes to equity is because of hesitancy from certain groups not trusting the health system.

“I reject that as a singular narrative, because of course it’s true,” Ivers said. We have hundreds of years of systemic racism to try to catch up on. But it’s very typical in public health, to blame the person who’s marginalized for them being marginalized. It is our responsibility that access is right up there, front and center, especially for communities that historically —  for very good reason — may have vaccine hesitancy. That’s on us to address. I don’t really like this narrative that’s emerging too much about that.”

On Friday, the Baker and state officials launched a public awareness campaign aimed at building trust around the COVID-19 vaccine within communities of color.

Our new state public awareness campaign – Trust the Facts. Get the Vax. – was launched today by @MassGovernor to promote the safety of the COVID-19 vaccine and encourage people to get vaccinated when it’s your turn. pic.twitter.com/81oDRBdQTo

In developing the campaign, Secretary of Health and Human Services Marylou Sudders said a state survey revealed that 53 percent of the 1,000 participating residents expressed concerns about the vaccine, with communities of color and individuals from lower socioeconomic statuses disproportionately represented in the group taking a “wait and see” and “more hesitant” view of shots.

Meanwhile, the 47 percent who indicated they were confident about getting vaccinated were predominantly white and affluent.

“This campaign is a crucial part of our work to ensure equity in the vaccine distribution process,” Baker said Friday. “And as I said before, we’re working with trusted partners like community health centers to launch vaccination clinics in communities of color across Massachusetts. But we recognize that ensuring access isn’t enough — we need to reach out to people in these communities who may be hesitant about the vaccination. And we understand that some may be distrustful of the medical system or have questions and concerns about the vaccine.”

There are several efforts underway to improve the state’s rollout. In Boston, City Councilor Michelle Wu is championing an effort to ensure there is at least one vaccination site in each residential zip code of the city. State lawmakers are pushing forward four proposals aimed at ensuring that making vaccination appointments is easier and more accessible, through efforts including a mobile vaccination effort.

While Ivers was sympathetic to the many hurdles and challenges facing those handling the response to the pandemic and the vaccination rollout, she said it is disappointing that the opportunity of the past year to invest in an enduring and equitable health system has not been seized in Massachusetts.

“We had a long time to prepare for vaccination in Massachusetts and around the country,” she said. “It’s not like the vaccines suddenly dropped out of the sky and we had no idea it was coming.” 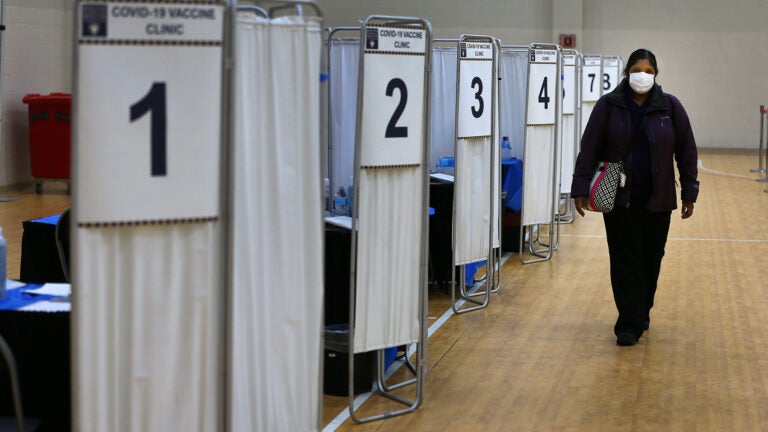