WASHINGTON – Drug companies planned to tell lawmakers Tuesday that they project a major increase in vaccine deliveries that will result in 140 million more doses over the next five weeks, saying they have solved manufacturing challenges and are in a position to overcome scarcity that has hampered the nation’s fight against the coronavirus.

“Because of the dire need to vaccinate more people, we have ramped up production of doses,” John Young, Pfizer’s chief business officer, told the House Energy and Commerce oversight and investigations subcommittee in prepared testimony.

But achieving a surge on that scale remains daunting. Pfizer and Moderna, the companies with the only authorized vaccines so far, will need to increase their combined deliveries to date of 75 million doses to reach their promised target of 220 million shots by March 31.

That’s a goal of 28 million doses each week on average, far greater than their performance so far. The Biden administration said last week that doses allotted to states would grow from 11 million to 13.5 million per week, and it also directed 2 million doses to pharmacies, part of allocations that are expected to increase modestly again this week.

If the companies are able to meet their projections,it would signal the beginning of the end of a period of deep frustration and mark faster progress against a pandemic that has claimed 500,000 lives in the United States.The slower-than-anticipated vaccine rollout has hampered progress toward vaccinating the 70% or 80% of the U.S. population of 330 million people required to achieve herd immunity against the coronavirus.

Pfizer and Moderna, which both make mRNA vaccines, fell far short of the delivery schedules set by the Trump administration in December, when their vaccines received emergency authorization from the Food and Drug Administration. But both companies are expressing confidence in their latest promises after continuing to invest in manufacturing and steadily advancing production. Combined, the two companies have contracts to provide 600 million doses, which they say will be ready by the end of July.

Pfizer, which is partnered with Germany’s BioNTech in production of its vaccine, has laid out an aggressive timeline for boosting deliveries in coming weeks, according to Young’s advance testimony. The company has been pouring money into doubling batch sizes and adding manufacturing suites, as well as making its own supply of crucial raw materials called lipids and creating its own finish-fill capacity to put batches of vaccine into vials for shipment.

Pfizer reported last week during President Biden’s visit to its Kalamazoo, Mich., manufacturing plant that it had reduced manufacturing time from 110 days to about 60 days.

Pfizer also benefited from an FDA decision that recognized “overfill” in its vials as a sixth dose, creating a 20% increase in its deliveries.

Uneven weekly production is among the reasons the Biden administration has not issued new promises beyond its initial goal of delivering 100 million shots within the president’s first 100 days, despite drugmakers’ more ambitious promises,according to a senior administration official who, like other officials addressing production schedules, spoke on the condition of anonymity because of the matter’s sensitivity.

The administration is aiming to hold the companies to their commitments, the official said, while maintaining “collaborative enough relationships where they will share risks, as opposed to putting a gun to their head and saying, ‘You have to do X or Y and we don’t want to hear anything about it.’ “

Two other Biden administration officials said it was unlikely that 220 million vaccine doses would be distributed by the end of March, even if a quantity approaching that total was allocated to states and other jurisdictions without being shipped by then. One official said just shy of 200 million doses was a more realistic estimate.

The potential for a supply pinch as the first quarter draws to a close late next month could represent a smaller-scale reprise of problems that bedeviled the Trump administration at the end of last year. Nancy Messonnier, director of the National Center for Immunization and Respiratory Diseases at the Centers for Disease Control and Prevention, estimated Dec. 20 at a meeting of a CDC advisory panel that there would be 40 million doses delivered in December, 60 million in January and 100 million in February – projections that proved much higher than reality.

Publicly posted CDC data indicates that about 75 million doses had been delivered as of Monday – about 10 million fewer doses than the companies said in their prepared testimony that they have provided.

Federal officials said delivered doses were split about evenly between the two companies. About 44 million people have received shots, with nearly 20 million of those people having received both required injections, for a total of about 64 million shots.

Pfizer’s promise is to provide 120 million doses by the end of March, while Moderna has said it will supply 100 million doses by then. To meet its target, Pfizer would have to release more than 2 million doses a day, or more than 14 million a week, for the next five weeks. The company currently is providing about 9 million doses a week, according to one of the federal officials involved in the vaccine effort, with the expectation that it can climb steadily to about 13 million doses per week by the beginning of April. Moderna is expected to level out at about 10 million per week, the official said.

Moderna said in its prepared testimony that it had produced 45 million doses as of this week, which leaves 55 million, or more than 10 million per week, to reach its goal of 100 million by March 31.

“As we work to meet these goals, we are continually learning and working closely with our partners and the federal government to identify ways to address bottlenecks and accelerate our production,” Moderna President Stephen Hoge said in prepared remarks.

The single-shot Johnson & Johnson vaccine, which is expected to be authorized for emergency use as soon as this weekend, also will provide a significant boost, though federal officials say only a few million doses will immediately be available.

“The production of our vaccine is a highly complex process that requires very particular capabilities and experiences,” Richard Nettles, vice president of U.S. medical affairs for Johnson & Johnson’s Janssen division, said in his prepared testimony. “As a result, there are significant challenges inherent in scaling manufacturing output and accelerating the timeline needed for a coronavirus vaccine.”

To prepare for an expected surge of vaccine, federal officials are organizing mass vaccination sites in stadiums and parks throughout the country. They are directing more vaccine supply directly to retail pharmacies. And they are telling states that, within a few months,supply of the shots could begin to outpace demand, requiring a redoubled effort to persuade reluctant people to be immunized.

Andy Slavitt, a White House senior adviser on the coronavirus response, said he spends as much time on demand-side models as on those addressing supply shortages. Behavioral factors influencing vaccine hesitancy, he said, present a “different but no less critical challenge than getting a factory to produce more supply.”

Prepared testimony for the House hearing provided a more detailed public look inside the production of vaccines by companies that are traditionally secretive about their production procedures and data. Lack of visibility into production schedules for Pfizer, in particular, has been a source of frustration for federal officials, although senior Biden administration officials maintain they have stronger communication lines into the manufacturing process than did the Trump administration. That includes in-person monitoring of manufacturing “as needed,” according to a senior Biden administration official who spoke on the condition of anonymity because of the sensitivity of the matter.

One of the central aims of Biden’s team was to provide states with better supply forecasting so they could prepare the needed workforce, determine eligibility groups and set public expectations. In the first several weeks of the rollout, state officials complained of being caught off guard by last-minute changes to their allocations. Less than a week after Biden took office, the administration increased weekly allocations by 16% and pledged to provide estimates of anticipated supply three weeks in advance.

That has proved more challenging than the president’s team expected, in large part because production increases have been uneven. Biden’s advisers have been able to notify states of increased supply each week – typically on calls with governors led by Jeff Zients, the White House’s coronavirus coordinator – but the three-week estimates have become less reliable.

Much of the difficulty in supply forecasting owes to fill-finish bottlenecks, which federal officials describe as the most important obstacle to increasing manufacturing.

Last week, Moderna disclosed what it described as “short-term delays in the final stages of production and release of filled vials” encountered by its production partner, New Jersey-based Catalent. The same company is performing fill-finish functions for Johnson & Johnson. Moderna stressed that it would be able to meet monthly targets, and federal officials said there was no decrease in supply available to states. Moderna has asked the FDA to permit it to add up to five more doses in each of its vials, which currently hold 10 doses, which would improve finish-fill capacity by 50%.

Officials in states throughout the country maintain they have the ability to administer as much as five times the amount of vaccine they are receiving. The promise of a flood of shots, they say, could help them end the pandemic.

“We have the capacity and infrastructure in place to drastically ramp up how fast we can get shots in arms in Connecticut if we have the supply to make it happen,” said Connecticut Democratic Gov. Ned Lamont. “The Biden administration has provided predictability and increased numbers of doses, supporting our efforts at the state level, and so long as that continues, the light at the end of the tunnel gets closer and closer.” 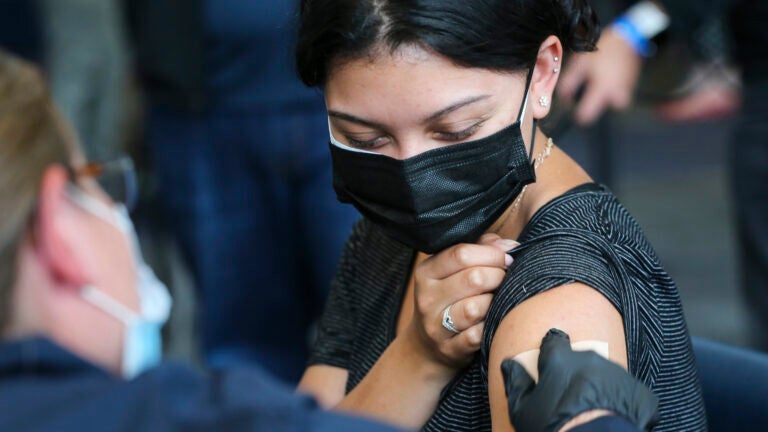 Mass. reports 4,059,144 people have been fully vaccinated against COVID-19