With 50 million Americans immunized against the coronavirus, and millions more joining the ranks every day, the urgent question on many minds is: When can I throw away my mask?

It’s a deeper question than it seems — about a return to normalcy, about how soon vaccinated Americans can hug loved ones, get together with friends, and go to concerts, shopping malls and restaurants without feeling threatened by the coronavirus.

Certainly many state officials are ready. On Tuesday, Texas lifted its mask mandate, along with all restrictions on businesses, and Mississippi quickly followed suit. Governors in both states cited declining infection rates and rising numbers of citizens getting vaccinated.

But the pandemic is not yet over, and scientists are counseling patience.

It seems clear that small groups of vaccinated people can get together without much worry about infecting one another. The Centers for Disease Control and Prevention is expected shortly to issue new guidelines that will touch on small gatherings of vaccinated Americans.

But when vaccinated people can ditch the masks in public spaces will depend on how quickly the rates of disease drop and what percentage of people remain unvaccinated in the surrounding community.

Why? Scientists do not know whether vaccinated people spread the virus to those who are unvaccinated. While all of the COVID-19 vaccines are spectacularly good at shielding people from severe illness and death, the research is unclear on exactly how well they stop the virus from taking root in an immunized person’s nose and then spreading to others.

It’s not uncommon for a vaccine to forestall severe disease but not infection. Inoculations against the flu, rotavirus, polio and pertussis are all imperfect in this way.

The coronavirus vaccines “are under a lot more scrutiny than any of the previous vaccines ever have been,” said Neeltje van Doremalen, an expert in preclinical vaccine development at the National Institutes of Health’s Rocky Mountain Laboratories in Montana.

And now coronavirus variants that dodge the immune system are changing the calculus. Some vaccines are less effective at preventing infections with certain variants, and in theory could allow more virus to spread.

The research available so far on how well the vaccines prevent transmission is preliminary but promising. “We feel confident that there’s a reduction,” said Natalie Dean, a biostatistician at the University of Florida. “We don’t know the exact magnitude, but it’s not 100%.”

Still, even an 80% drop in transmissibility might be enough for immunized people to toss their masks, experts said — especially once a majority of the population is inoculated, and as rates of cases, hospitalizations and deaths plummet.

But most Americans are still unvaccinated, and more than 1,500 people are dying every day. So given the uncertainty around transmission, even people who are immunized must continue to protect others by wearing masks, experts said.

“They should wear masks until we actually prove that vaccines prevent transmission,” said Dr. Anthony Fauci, director of the National Institute for Allergy and Infectious Diseases.

That proof is not yet in hand because the clinical trials for vaccines were designed to test whether the vaccines prevent serious illness and death, which usually reflects the virus’s effect on the lungs. Transmission, on the other hand, is driven by its growth in the nose and throat.

Primed by the vaccine, the body’s immune fighters should curb the virus soon after infection, shortening the infection period and curtailing the amounts in the nose and throat. That ought to significantly reduce the chances that a vaccinated person might infect others.

Animal studies support the theory. In one study, when monkeys were immunized and then exposed to the virus, seven of eight animals had no detectable virus in their noses or lung fluid, noted Juliet Morrison, a virus expert at the University of California, Riverside.

Similarly, data from a few dozen participants in the Moderna trial who were tested when they got their second doses suggested that the first dose had decreased cases of infection by about two-thirds.

Another small batch of data emerged recently from the Johnson & Johnson trial. Researchers looked for signs of infection in 3,000 participants up to 71 days after getting the single-dose vaccine. Risk of infection in that study seemed to fall by about 74%.

“I think that’s very powerful,” said Dan Barouch, a virus expert at Beth Israel Medical Center in Boston, who led one of the trial sites. “Those number estimates could change with more data, but the effect seems quite strong.”

More data is expected in the coming months from both Pfizer-BioNTech and Moderna.

But clinical trials may overestimate the power of a vaccine, because the type of people who choose to participate already tend to be careful and are counseled on precautions during the trial.

Some researchers instead are tracking infections among immunized people in real-world settings. For example, a study in Scotland conducted tests every two weeks, regardless of symptoms, on health care workers who had received the Pfizer-BioNTech vaccine. Investigators found that the vaccine’s effectiveness in preventing infection was 70% after one dose, and 85% after the second.

Researchers in Israel assessed infections in almost 600,000 immunized people and tried to trace their household contacts. The scientists found a 46% drop in infections after the first dose and a 92% drop after the second. (The study may have missed infections in people without symptoms.)

But to get a true assessment of transmission, researchers really need to know which immunized people become infected, and then trace the spread of the virus among their contacts with genetic analysis.

“That’s the ideal way to actually do this,” said Dr. Larry Corey, an expert in vaccine development at The Fred Hutchinson Cancer Research Center in Seattle. He is hoping to conduct such a study in college-age students.

But what precautions should immunized people take until the results from such studies become available? At the moment, many experts believe that what’s permissible will depend to a large extent on the number of cases in the surrounding community.

The higher the number of cases, the greater the likelihood of transmission — and the more effective vaccines must be in order to stop the spread.

“If the case numbers are zero, it doesn’t matter whether it’s 70% or 100%,” said Zoe McLaren, a health policy expert at the University of Maryland, referring to vaccine effectiveness.

Mask-wearing policies also will depend on how many unvaccinated people remain in the population. Americans may need to remain cautious as long as vaccination rates are low. But people will be able to relax a bit as those rates rise, and begin to return to normalcy once the virus runs out of others to infect.

“A lot of people have in mind that masks are the first thing that you let up on,” MacLaren said. In fact, she said, masks provide more freedom by allowing people to go to concerts, travel on buses or airplanes, or go shopping even with unvaccinated people around.

Ultimately, masks are a form of civic responsibility, said Sabra Klein, an immunologist at the Johns Hopkins Bloomberg School of Public Health. 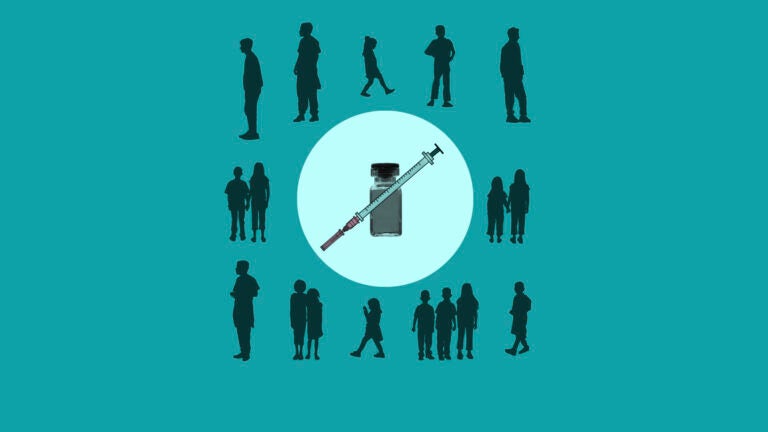 When will children be able to get COVID-19 vaccines?