CHICAGO — Officials in at least 17 states have committed in recent days to opening coronavirus vaccine appointments to all adults in March or April, part of a fast-moving expansion as states race to meet President Joe Biden’s goal of universal eligibility by May 1.

Massachusetts announced this week that it will expand eligibility to all residents over the age of 16 on April 19. In Ohio, all adults will be allowed to seek shots starting March 29. In Connecticut, April 5. In Alaska and Mississippi, all adults are already able to book appointments. And Thursday, officials in Illinois, Kentucky, Rhode Island, Maryland and Missouri said that all adults would be allowed in April to sign up for a shot, while Gov. Spencer Cox of Utah said universal eligibility would begin there next week.

But even as the pace of vaccinations has accelerated to about 2.5 million shots each day nationwide, the country finds itself at a precarious point in the pandemic. Cases, deaths and hospitalizations have all fallen sharply from January peaks, yet infection levels have plateaued this month, at about 55,000 new cases a day. While governors relax restrictions on businesses like bars, indoor gyms and casinos, highly infectious variants are spreading and some states, especially on the East Coast, have struggled for weeks to make any progress in reducing cases.

As parts of the country continue to see progress, many Americans are booking spring break trips, dining in newly reopened restaurants and replanning summer weddings that were abruptly canceled in 2020. All the while, the path ahead — and public guidance about how people should behave in this moment — seems uncertain, even contradictory.

Although deaths have dropped considerably in New York, progress in reducing cases has stalled. The state has more recent cases per capita than everywhere except New Jersey, and the New York City metro area has the country’s second-highest rate of new infections, behind only Idaho Falls, Idaho.

“People will be reckless; I don’t know how else to say it,” said Carol Greenberg, a pet care worker in Jersey City, New Jersey, who said she worried that people were starting to act in ways that did not accurately reflect the number of new virus cases in that state, where more than 26,000 new infections have been reported in the past week.

Greenberg, 61, has been fully vaccinated, but her adult children have not, and she said she wondered whether all the reopening announcements of late were wise. In recent days, Gov. Phil Murphy urged a return to in-person instruction at New Jersey schools and announced a loosening of restrictions at restaurants, bars, salons and other businesses.

Epidemiologists said they viewed the current moment in the pandemic as a sprint between vaccinations and newly confirmed cases of the virus, particularly infections that are spreading because of variants that can be more contagious. No vaccine has yet been authorized for use in people younger than 16, though trials are underway to see if they are safe and effective in children.

In Chicago, where students in the nation’s third-largest public school system have returned to classrooms, and where parks, bars and movie theaters are reopened, city officials announced that restaurant employees, construction workers and people who have preexisting health conditions would be newly eligible for vaccination by the end of March. Cook County, which includes Chicago, has averaged between 600 and 700 cases each day for nearly a month, down from about 4,500 cases a day at its November peak.

“We’ve weathered a lot of storms over the course of this year,” Mayor Lori Lightfoot of Chicago said after visiting a vaccination site this week. “We’ve got to stay diligent. We’ve got to continue to work hard. But we are moving exactly in the right directions.”

Still, the city’s usual outsize enthusiasm for observing a springtime ritual — going out on St. Patrick’s Day — was muted, at best. On Wednesday, few pedestrians were wandering on downtown streets, typically packed with revelers on the holiday. The Chicago River had been dyed its traditional bright shade of green, but the popular Riverwalk alongside it was nearly empty.

Jacob Roberts, 29, was downtown Wednesday, taking a vacation from his home in Washington state. The trip to Chicago was a bucket-list visit he had always wanted to take.

“I was cooped up in Washington and getting sick of everybody looking kind of down in the dumps,” he said. “But it’s honestly the same thing everywhere you look right now.”

Although tourism has yet to return in force in places like New York and Chicago, the country’s outlook in battling the virus appears far better than when winter began.

No state is reporting case numbers anywhere near record levels, and the sort of explosive case growth seen in hard-hit areas through 2020 has almost completely abated. Kansas is averaging about 215 new coronavirus cases a day, down from more than 2,000 in early January. In California, around 2,900 cases are reported most days, down from about 40,000 in mid-January. And North Dakota, which has the country’s most known cases per capita, is now regularly adding fewer than 100 cases a day, in a state with a population of 762,000.

A projection by the University of Washington’s Institute for Health Metrics and Evaluation suggests that coronavirus cases will continue to slowly decline in the United States in the coming months.

But with most Americans still unvaccinated and variants continuing to spread, there are warning signs in the data. Vermont, which escaped the worst of the pandemic in 2020, has struggled all of this year to curb an outbreak. Michigan, which had appeared to bring the virus under control in January, has seen case numbers increase by more than 80% over the past two weeks, though they remain well below their December peak. In South Florida, infection levels have remained persistently high, with about 1,000 cases reported each day in a single county, Miami-Dade.

Even in states where the virus appeared far from under control, officials have proceeded to lift restrictions on businesses, and companies have pushed for reopenings. On Wednesday, Gov. Andrew Cuomo of New York announced that indoor fitness classes may resume Monday. In Southern California, where cases peaked early this winter, officials at Disneyland said that after more than a year of being closed, the theme park would open April 30 with rules in place limiting capacity.

Around the country, some people said they were hesitant to dive back into old routines, even if their elected officials have indicated that it is permissible to do so.

“I used to be regular at a gym twice a week or so, and I haven’t been since last February at all,” said Paul Eustice, 64, who lives in downtown Chicago. “I will not go in there where people are breathing heavily.”

Last week, U.S. air travel rose to its highest level since the pandemic hit, and airline executives said that bookings in the coming months indicate an eagerness from Americans to begin traveling in large numbers again.

Some of them are among the newly vaccinated.

Since vaccinations began in December, the federal government has delivered more than 151 million vaccine doses, and about 77% have been administered, according to the Centers for Disease Control and Prevention. The country is averaging about 2.5 million shots a day, compared with well under 1 million a day in early January.

As of Thursday, 66% of the country’s older population had received at least one vaccine dose, according to CDC data, with 39% fully vaccinated.

At least 23 states have said they will expand vaccine eligibility to their general population on or before May 1, the deadline that Biden set last week, and officials have spoken more openly about what life might be like when the pandemic ends.

“As more Montanans get the vaccine,” Gov. Greg Gianforte said as he announced that all Montana adults would be eligible April 1, “we will begin to approach the time when we are no longer in a state of emergency and we can remove our masks and throw them in the trash.” 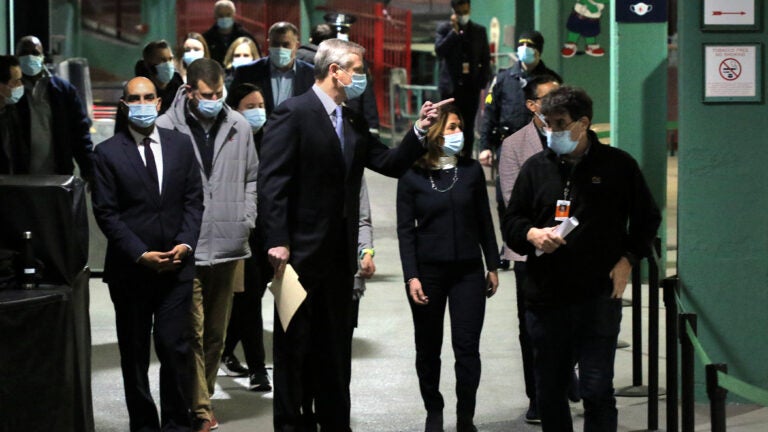 Massachusetts will officially move to Phase 4 of the reopening plan Monday, even as some advocates urge more caution