A group of Massachusetts community leaders, activists, and health care workers lined up in front of the gates outside the Massachusetts State House on Tuesday, some with cardboard signs in hand as they shared stories from working on the frontlines throughout the coronavirus pandemic, and where they believe Gov. Charlie Baker’s response failed the state’s vulnerable populations along the way.

A small masked crowd gathered along the sidewalk parallel to the Boston Common as the event kicked off around noon. Organized by the Massachusetts Coalition for Health Equity, the rally aimed to hold Baker’s administration responsible for what they described as a consistent lack of transparency and equity throughout its response to the virus, as well as a reliance on no-bid contracts when selecting private companies to lead mass vaccination campaigns.

“We should have known that their response to a health crisis would be entirely political,” Boston infectious disease physician and member of the Mass. Coalition for Health Equity Dr. Amir Mohareb announced in his opening remarks, which were live-streamed on Facebook.

Alongside local physicians and nurses, State Sen. Becca Rausch, and representatives from community organizations like the Massachusetts Public Health Association, Immigrants’ Assistance Center, Prisoners’ Legal Services, and the Massachusetts Nurses Association were some of those present at the rally.

Throughout the event, organizers called for more transparency in the use of public funds when it comes to public health, and a reopening plan based on the scientific expertise of the state’s and nation’s public health leaders among other topics.

“Although the Governor continues to try to put all the blame for the vaccine rollout on available doses, equity in delivery and accountability for his decisions have been in even shorter supply,” said Sen. Rausch, a Needham Democrat and co-lead sponsor of the COVID-19 Vaccine Equity Act. “Equity-focused epidemiology expertise should have been the leading force but we keep seeing deeply flawed decisions to the contrary, evidencing the Governor’s choice to elevate private profits over public health and administrative efficiency over access to care.”

Continued oversight hearings from the joint committee will help generate accountability, she added, although it is necessary to also pass the Vaccine Equity Act and ensure that communities hardest hit by the virus are supported.

Massachusetts Attorney General Maura Healey warned in Feb. that it’s “a tragedy” to abandon the community vaccine access sites that hospitals have been creating.

“They’ve built systems to reach eligible patients of color to help them get the vaccine,” she tweeted at the time. “They’ve been doing the heavy lifting to save lives and promote equity for months.”

Shifting shots to mass vax sites and away from hospital and clinical infrastructure increases racial disparities. Doctors, and community care personnel are key to to addressing mistrust and barriers to the vaccine. The move to cut them off is short-sighted.

Instead of choosing between equity and efficiency, Healey said officials just need to put in more work to achieve both.

“Shifting shots to mass vax sites and away from hospital and clinical infrastructure increases racial disparities. Doctors, and community care personnel are key to addressing mistrust and barriers to the vaccine,” Healey added in her tweets. “Turning off the supply to our hospitals isn’t fair to the people disproportionately hurt by COVID, stuck at home, without computers or someone to navigate websites or a ride to Foxborough.”

In Chelsea, 68% of the population is Latinx. According to state vaccine data released on March 18, 4% of the city’s Latinx residents have been vaccinated compared to 24% of its white residents.

Sen. Rausch said the data out of Holyoke, Worcester, Springfield, Lawrence, and other Mass. cities tells the same story.

The Baker administration announced last week that it would allocate $27.4 million in federal funds toward increasing trust, vaccine acceptance, and administration rates in the 20 hardest-hit communities in Mass. The new efforts are part of the state’s Vaccine Equity Initiative, which was launched to help acknowledge the ways communities of color have suffered disproportionately high rates of coronavirus infections and deaths across the country because of deep-rooted structural inequities.

Through the initiative, Baker’s administration has collaborated with community and faith-based organizations to build trust, as well as spread the state’s “Trust the Facts. Get the Vax.” multilingual public awareness campaign.

But Dr. Amir Mohareb said while this plan to partner with local organizations to increase outreach is welcomed, it isn’t enough.

“Our vulnerable populations don’t have vaccine hesitancy,” he told the event crowd. “I’ll tell you, as a doctor — they have a justified mistrust of people in power. And it’s on us to change that relationship. It’s on us to change decades and centuries of injustice that has been perpetuated through the political system hand-in-hand with a gigantic health-care-oriented private industry that we have in this state.”

Mohareb said there needs to be guarantees when it comes to accountability and allocating public funds.

“From the beginning of the COVID pandemic, Governor Baker has excluded the voices of the hardest hit communities, preferring to fill his advisory boards with corporate CEOs and giving no-bid contracts to private corporations instead of using our public health infrastructure and plans designed for a crisis such as this,” the health equity coalition member said in a statement.

Organization members explained that as Baker moves forward with the state’s reopening plan, COVID-19 case rates have plateaued at a high level, and vaccination efforts aren’t reaching patients in hard-hit communities who may not have the time or internet access to navigate the Mass. website, or have access to transportation to get to their appointment.

That’s why the Massachusetts Public Health Association penned an open letter to Baker, signed by 29 other organizations, urging him to delay reopening steps that took effect Monday, but to no avail.

The recently appointed Centers for Disease Control and Prevention Director Rochelle Walensky has repeatedly cautioned officials against rolling back state-level COVID-19 precautions and restrictions, while Gov. Baker has defended his reopening process.

Dr. Lara Jirmanus, a family physician in Revere and member of the health equity coalition, reminded how important it is for 80 to 85% of people to get vaccinated before infection rates are really reduced.

“We should be rushing to vaccinate high-risk people, not to reopen restaurants and music venues,” Jirmanus said in a statement. “With new variants out there, it may only be a matter of time before we face a crisis like Italy.” 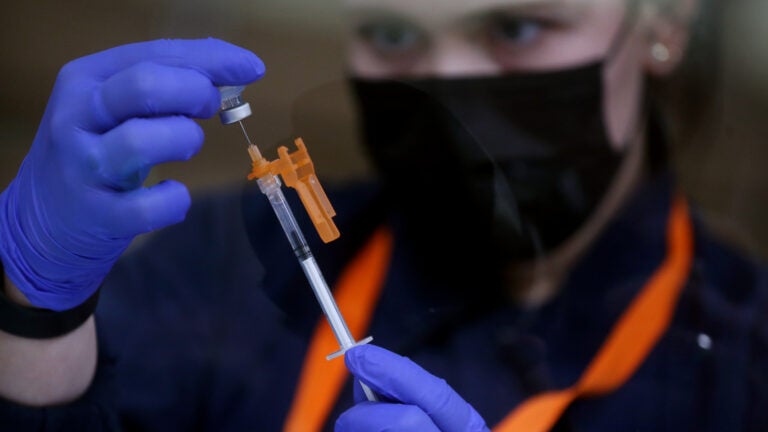 Massachusetts planned to set aside 20 percent of vaccine doses for hard-hit communities. What happened?