Though 15 million Johnson & Johnson doses were accidentally ruined, Massachusetts has not been told to expect delays in the promised shipment of over 100,000 doses of the one-shot COVID-19 vaccine next week, state officials said.

“This news does not impact current appointments or allocations for any sites statewide and we remain prepared to work collaboratively with the federal government to avoid any disruption in vaccine shipments,” she continued.

The timing was inopportune: Gov. Charlie Baker announced the shipment in a press conference Wednesday, hours before news broke about the soiled doses.

“I can’t tell you how important that is… It’s a really big deal,” Baker said at the conference.

Federal officials said the 15 million doses were ruined weeks ago from a mix-up at a Baltimore plant. That plant has not yet produced any doses that have actually been shipped and used — all those were made in the Netherlands.

The Johnson & Johnson vaccine is a particularly important part of the nationwide vaccination effort because it only requires one shot, lowering the time needed for immunization and raising capacity for other patients. The Moderna and Pfizer vaccines need two shots about a month apart for full vaccination, which can take up to six weeks. All three vaccines have proven extremely effective at preventing severe disease.

Over 88,000 people in Massachusetts have received the Johnson & Johnson shot, according to data from the state department of health. Over 2.2 million have received at least one dose of the Moderna or Pfizer vaccines. 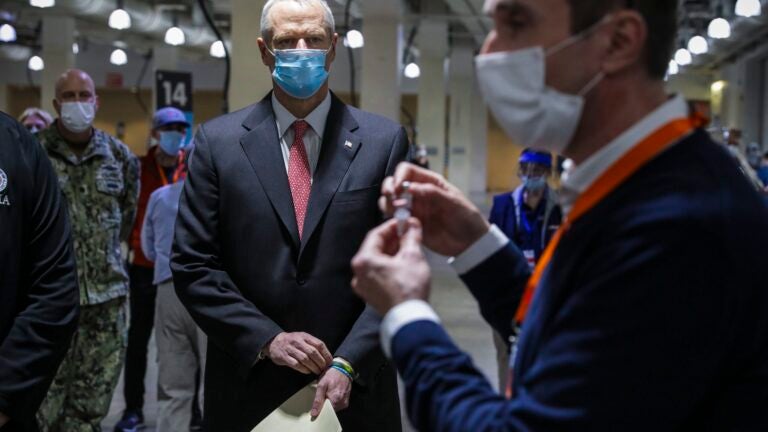 Massachusetts expected to get more than 100,000 doses of the Johnson & Johnson vaccine next week