Massachusetts continues its race against the clock this week, working to get doses of the COVID-19 vaccines into the arms of residents as fast as possible as the number of coronavirus cases ticks up and infections from virus variants rise.

With the vaccine rollout pressing forward, state officials have been providing frequent updates on the effort to protect against COVID-19. Below, what you should know about the vaccination campaign in Massachusetts this week.

Two new groups of Massachusetts residents will be able to start getting shots starting Monday, April 5, as the state moves along with its vaccination rollout. Residents 55 years and older are up in line, along with individuals 16 and older with one of the certain medical conditions designated by the state. Last week, the Centers for Disease Control and Prevention updated its list of health conditions associated with a high risk of severe COVID-19 to include a number of new health issues, including cystic fibrosis, dementia, Type 1 diabetes, HIV, hypertension, and substance use disorder.

After Gov. Charlie Baker initially declined to say whether Bay Staters could expect a similar change, the state announced Friday it would adopt the CDC’s list of conditions. With the update, officials say more than 1 million additional residents will become eligible for vaccines starting Monday.

The governor is continuing to defend his administration’s timeline for opening up vaccine eligibility as surrounding states have earlier plans or have already begun allowing residents as young as 16 to sign up for shots. Bay Staters under the age of 55 that do not meet any of the other eligibility criteria do not become eligible for appointments until April 19.

Massachusetts is expected to get more than 100,000 doses of the Johnson & Johnson vaccine this week

The state is expecting over 100,000 doses of the one-shot Johnson & Johnson vaccine this week, in what Baker described as the “first really significant shipments” from the company.

Despite a national manufacturing mixup that ruined 15 million doses, state officials expect the shipment to arrive as scheduled. But it’s less clear how shipments in the weeks to come may be affected.

About half of the 100,000 doses will be shipped this week directly to CVS and Walgreens locations through the federal government’s partnership with retail pharmacies to administer vaccines. The other half of the shipment, allocated to the Baker administration, will be distributed across the state’s regional vaccination collaboratives, community health centers, the new homebound vaccination program, and clinics at low-income senior housing.

The Baker administration announced last week that through its partnership with FEMA, which designated the Hynes Convention Center a federal mass vaccination site, a mobile vaccination effort is launching in Chelsea, Revere, Boston, Fall River, and Brockton. According to the state, FEMA is supporting the daily administration of 6,000 vaccine doses for eight weeks in a “hub and spoke” model where shots from the central hub — Hynes Convention Center — will be distributed to nearby communities through the mobile vaccination units and pop-up clinics.

The mobile vaccination effort will be started this week and ramp up over time in the five communities, scaling up to 500 vaccines available per day in each community, according to the state. Most of the mobile units and clinics will be set up in city parks, parking lots, and other community locations.

Good news came last week for Americans who have gotten their shot(s). The Centers for Disease Control and Prevention updated its guidance on Friday to say fully vaccinated individuals can travel within the United States without getting tested for the coronavirus or going into quarantine afterward. People are considered fully vaccinated two weeks after the second dose of the two-shot vaccines and two weeks after receiving the single-dose Johnson & Johnson vaccine.

Pfizer announced last week that the COVID-19 vaccine it developed is safe and strongly protective in kids as young as 12, a promising step toward potentially offering shots to the age group before a new school year starts in the fall, the Associated Press reports.  Currently, the company’s vaccine is authorized for ages 16 and older.

Experts say that vaccinating children of all ages will be critical to bringing an end to the pandemic and helping schools, particularly the upper grades, return to more normal operations after students have experienced more than a year of disruption.

The Centers for Disease Control and Prevention announced last week that the two vaccines available since December — Pfizer and Moderna — were highly effective (90 percent) after two doses at protecting against COVID-19 in real-world settings. The CDC’s study also found that the first dose of the vaccines was 80 percent effective at preventing infection, starting two weeks after the shot was received.

‘Vaccine passports’ are on the way, but developing them won’t be easy

The Biden administration is working with private companies to develop a standard way of handing credentials referred to as “vaccine passports” that would allow Americans to prove they have been inoculated against COVID-19 as businesses and travel reopens, The Washington Post reports. It is expected that the passports would be free and made available through smartphone applications that would display a scannable code, but U.S. officials told the newspaper they are wrestling with a host of challenges including data privacy and health care equity.

According to The New York Times vaccine rollout tracker, Massachusetts continues to rank in the top half of states based on the percentage of residents who are fully vaccinated (21 percent). The Bay State is also in the top 10 based on the percentage of the state population who have received at least one dose of the two-shot vaccines (37 percent). See how Massachusetts compares to other states and U.S. territories here. 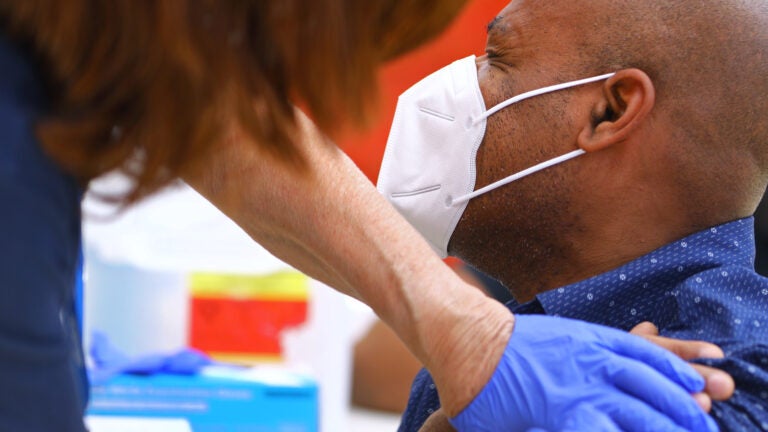