Walgreens has inoculated hundreds of thousands of Americans against COVID-19 this year using the vaccine developed by Pfizer and Germany’s BioNTech. But the pharmacy chain has not been following guidance from federal health officials about the timing of second doses.

People are supposed to get two doses, three weeks apart. Walgreens, however, separated them by four weeks because that made it faster and simpler for the company to schedule appointments.

There is no evidence that separating the doses by an extra week decreases the vaccine’s effectiveness. While the Centers for Disease Control and Prevention recommends a three-week gap, the agency says it is acceptable to separate the doses by up to six weeks if necessary.

But Walgreens’ decision, which it didn’t publicly announce, confused some customers and caught the attention of federal health officials. Kate Grusich, a spokeswoman for the CDC, said the agency had asked Walgreens to stop using a longer-than-recommended time period between doses.

The company’s vaccine-scheduling system by default schedules all second doses four weeks after the first. Doses of Moderna’s vaccine, which Walgreens is also administering, are supposed to be spaced four weeks apart. Using the same gap for both vaccines was “the easiest way to stand up the process based on our capabilities at the time,” Dr. Kevin Ban, Walgreens’ chief medical officer, said.

Now Walgreens is changing its system. Starting as soon as the end of the week, the pharmacy will automatically schedule people for Pfizer doses three weeks apart, Ban said.

Walgreens is one of the largest among dozens of drugstore and grocery store chains that are giving out vaccines allocated by states and via a federal program that the White House said last week would expand to 40,000 locations. Walgreens reported last week that it had given out more than 8 million COVID vaccine doses, including 4 million in March, and expects to give out 26 million to 34 million before the end of August.

Walgreens, along with CVS, previously led an effort to vaccinate nursing homes and other long-term care facilities, during which the chain gave out Pfizer doses at facilities with visits spaced three weeks apart.

The vaccination campaign is a business opportunity for Walgreens, which is bringing in revenue from the vaccine administration fees paid by government and private payers as well as from purchases made by shoppers coming in for vaccines. The company requires people to create a Walgreens account to search online for a vaccine appointment.

Most other major pharmacies, including CVS and Rite Aid, stuck with the CDC’s guidance on the timing of second doses. CVS, for example, schedules second Pfizer shots for 20 to 23 days after the first shot, said T.J. Crawford, a spokesman for the chain.

Some public health experts believe the U.S. should delay the second doses of vaccines by longer than Walgreens has been doing with the Pfizer vaccine. That way, more people can get partial protection through the first shots. Britain, for example, is delaying second shots by up to three months. Canada has begun delaying doses by up to four months.

But it was a three-week gap that underwent extensive clinical testing, and U.S. officials and Pfizer executives have not voiced support for alternate dosing schedules.

Asked about Walgreens’ scheduling, Kit Longley, a spokesman for Pfizer, said the safety and efficacy of the company’s vaccine had not been evaluated on dosing schedules different from the three-week gap tested in clinical trial volunteers.

It is largely arbitrary that Pfizer and Moderna’s vaccines, which both use similar “messenger RNA” technology, have different dosing schedules. Pfizer’s decision to test its vaccine with less time separating the two shots helped the company finish its late-stage clinical trial quickly and to report results one week faster than Moderna last November.

Walgreens’ decision to not adhere to the CDC’s guidance on dose spacing for Pfizer’s shot left some customers confused. Some assumed, based on their appointment dates, that they would be getting Moderna shots. Then they learned with surprise at their first appointment that they were getting Pfizer.

Mary DeTurris Poust, a writer in Delmar, New York, who got her first Pfizer shot from Walgreens late last month, has been trying, to no avail, to reach a Walgreens representative to reschedule her second-dose appointment for a week sooner.

Walgreens’ system currently allows people to rebook their second-dose appointment, but they can do so only the day before the appointment.

“I’m not happy about it,” DeTurris Poust said. “It gives me one extra week of not being protected, so it means there’s one more week that I’m worried about catching it from someone, or giving it to someone.”

Some public health experts said they were not concerned that Walgreens has been scheduling doses with a four-week gap.

“It’s a week difference. Everybody’s going to need to put it in their contexts and their risk factors, but I think this is a very reasonable approach” from Walgreens, said Dr. Katherine Poehling, a pediatrician at Wake Forest School of Medicine who sits on the CDC advisory panel that recommended that Pfizer doses be given roughly three weeks apart.

But other experts said they were troubled.

“It is not the role of a private, for-profit company to make public health decisions that should be determined by guidelines issued by a public health authority,” said Lawrence Gostin, a global health law professor at Georgetown University.

Dima Qato, a pharmacist and associate professor at the University of Southern California School of Pharmacy, said she was concerned about how the public perceives inconsistent messages about spacing doses of the same vaccine.

“As we’re trying to build trust in this pandemic, I think this may push us back,” Qato said.

Walgreens is not the only vaccine provider that has been giving second shots slightly later than recommended. Others around the country have been doing so for months, especially in the early days of the rollout when vaccine supply was constrained and sites had little clarity about which vaccines and how many doses they would be receiving in subsequent weeks, said Tinglong Dai, who studies health care operations at Johns Hopkins University.

The health department in Allegheny County, Pennsylvania, is doing the same at a mass-vaccination site in Castle Shannon that inoculates 5,000 people weekly. That makes it easier to manage staffing and space constraints when the site is offering both Pfizer and Moderna vaccines, said the county spokeswoman Amie Downs. She said the county planned at the end of this month to go back to giving Pfizer doses with a three-week gap, after it has stopped giving out Moderna doses.

The vast majority of people in the United States are getting their second shot when recommended, though more people have been getting it later as the vaccine rollout has expanded.

The CDC’s data through March 28 show that the percentage of people who got their second shot after the recommended period but within six weeks has increased to 7% from less than 3% through Feb. 14, according to Grusich, the agency spokeswoman. 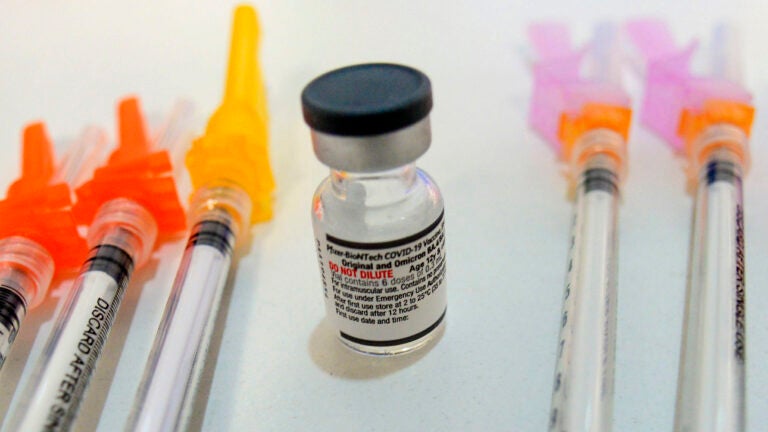