BOULDER, Colo. – A week before she would have become eligible for a coronavirus vaccine, Madden Brewster agreed to forgo a shot for months to help scientists answer one of the most pressing questions of the pandemic: When can we all stop wearing our masks?

Brewster, a 24-year-old graduate student at the University of Colorado at Boulder, is as impatient as anyone for the pandemic to end, but delaying her shot may be her most powerful way to contribute. She is one of the first volunteers in a massive study unfolding at 20 college campuses. It aims to determine how well the Moderna vaccine prevents vaccinated people from becoming unwitting carriers of the virus.

To find an answer, researchers need to run an experiment — and make a big ask of college students: Flip a coin and get the vaccine now, or put off a shot for four months. Only by studying both groups will researchers determine how well vaccines work in stanching the virus’s spread.

All three authorized vaccines in the United States offer recipients robust protection against illness, particularly the worst cases. But how good are they at blocking transmission to other people?

Because that question has no definitive answer, fully vaccinated people are advised to still wear their masks in public. The future contours of the pandemic and the risk posed by variants remain blurry without understanding whether the virus will keep circulating even once most people are vaccinated.

There is mounting, though incomplete, evidence that people receiving inoculations are protected from all kinds of infections — including insidious, symptom-free infections that have made the virus so challenging to contain.

“This study is addressing the important issue about what does it mean to be vaccinated, as far as your risk for transmitting SARS-CoV-2 to people in your bubble of trust,” said Lilly Immergluck, a pediatric infectious-disease specialist at Morehouse School of Medicine.

“I’ve had friends around my age or a little older, and they’re a little wishy-washy about the vaccine because they’re like, ‘Whatever, I haven’t gotten COVID, and I don’t think it will affect me that much.’ But this isn’t about you — it’s about other people in the community that are more vulnerable,” Brewster said.

Brewster gets a notification on her phone every day reminding her to swab her nose, scan a bar code on a tube and seal up her sample. She answers questions in an electronic diary and will provide blood samples during the study.

She drew up a list of the people in her bubble — colleagues in the laboratory and a close friend who works as a nanny — who will be asked to undergo similar intensive testing if she becomes infected.

Brewster said her heart sank a little when she learned she wouldn’t be vaccinated right away. Nothing about the trial prevents people from seeking out vaccination on their own, but she views participating as a way to contribute to history — an altruistic impulse that scientists running the trial said they are depending on. In the first week of enrolling in the trial at UC-Boulder, some students who found out they wouldn’t get the vaccine right away were crushed.

“There were kids . . . who just broke down,” said Brian L. Stauffer, chief of cardiology at Denver Health Medical Center and one of the leaders of the Boulder trial. “One individual sat there, and recovered, and said, ‘Let’s do it.’ . . . It’s been great to see people participate that way. We frequently don’t give college kids enough benefit of the doubt.”

‘Does it slow transmission?’

A year ago, scientists had just started designing 30,000-person coronavirus vaccine trials that sought to determine if shots could prevent recipients from getting sick and dying. With the pandemic claiming hundreds of lives a day in the United States at the time, it was imperative that trials go fast and provide clear answers.

“Does the vaccine protect? . . . That’s always going to happen first. You’re not going to be able to tell: Does it protect against infection? Does it slow transmission,” said Ira Longini, a statistician at the University of Florida who co-wrote the book, “Design and Analysis of Vaccine Studies.” “The trials are powered to get a clear answer: Does the vaccine work: yes or no, given the criteria?”

Those initial trials left open a plausible, disturbing scenario: The vaccines might reduce the severity of disease in people receiving the shot but not repel the virus completely, turning them into symptom-free virus spreaders.

The trials could have been made more complex, to answer additional questions, but keeping them simple and streamlined was intentional.

“When you put a lot of bells and whistles on something, you lose focus,” said Larry Corey, a leader of the federal trial network used to test the coronavirus vaccines and a virologist at the Fred Hutchinson Cancer Research Center.

Now that the vaccines have been shown to be remarkably effective, Corey said, it’s time to seek answers to questions he could only have imagined asking a year ago. Back then, “I would honestly sort have said, I’d love to get to the point where we can look at: Are we shifting the spectrum so everyone is infected but asymptomatic and might be transmitting?”

Still, Corey began plotting follow-on trials almost in tandem with the initial ones and saw college students as an ideal population to study transmission. They were young, living in dormitories with many social contacts, had high attack rates from the virus and were likely to have mild or asymptomatic infections.

Students in the study will swab their noses daily, providing a wealth of information.

Scientists will learn about the duration of infections in vaccinated and unvaccinated people and measure how much virus they have in their noses and for how long. Researchers will learn the real-world consequences of carrying different amounts of virus by repeated testing of the vaccinated participants’ close contacts. The genetic fingerprints of virus samples will be taken, giving insight into how the shots work against variants.

The study could provide crucial knowledge about the ability of people with asymptomatic infections to spread the virus. Bits of data from large vaccine trials have suggested that people are protected against asymptomatic infections. Studies of the real-world use of vaccines in Israel and the United Kingdom bolster the case. Most recently, a study of about 4,000 health-care workers in the United States showed the Moderna and Pfizer-BioNTech vaccines were 90 percent protective against infections, including those without symptoms.

But the health-care workers in the study swabbed their noses only once a week. Short-lived, asymptomatic infections might not be picked up by sporadic swabbing. And those infections might become a conduit for the virus to keep spreading. That leaves open key questions, said Jasmine Marcelin, an infectious-disease physician at the University of Nebraska Medical Center and one of the leaders of the college campus study.

A study using exhaustive contact tracing to definitively show that being vaccinated protects others could amplify reasons for people to get vaccinated.

“Coupling the potential for reducing transmission to your loved ones with your own protection for yourself from getting very sick or dying — those two are really powerful arguments,” Marcelin said. “Some people may not view themselves as susceptible, but they may have a loved one that they really care about they would like to protect.”

‘You don’t find what you don’t look for’

College students have provided some of the most intriguing data on the pandemic — in part because surveillance programs universities set up early to detect outbreaks yielded data on mild or asymptomatic cases that may never have been recognized otherwise. At UC-Boulder, students provided spit samples once a week.

“We never would have found a lot of these people if we weren’t doing surveillance. We would have never known,” said Kristen Bjorkman, a postdoctoral researcher before the pandemic who now coordinates COVID-19 science research at UC-Boulder. “You find what you look for, and you don’t find what you don’t look for.”

Early in the pandemic, there was doubt about whether asymptomatic people could spread the disease. It quickly became clear this was one of the most profound misconceptions about the virus, one that rendered traditional public-health measures, such as isolating sick people or screening for symptoms, only partly effective. Disease specialists realized the virus can spread before people develop symptoms and even when they never develop symptoms. But how much this contributes to transmission remained a point of debate.

Many had assumed that people without symptoms might be far less likely to spread the virus. But UC-Boulder researchers found in an earlier study that wasn’t necessarily true.

They discovered that college students who were infected but did not have symptoms at the time of testing bore a strong resemblance to the sickest hospitalized patients when it came to who was a potential spreader. In both groups, 2 percent of the people were responsible for carrying 90 percent of the virus in the population studied. That meant there were supercarriers lurking among those who had not spiked a fever or developed a cough, knocking down the assumption that people with no symptoms were less prone to be potent reservoirs of the virus.

Another study from Boulder found support for the idea that the amount of virus in people’s noses could be the determining factor in whether they spread the infection. Students who infected their roommates had 6.5 times as much virus in their nose as those who were infected but didn’t spread the virus to their roommates. The college established isolation residence halls to stop the virus spreading like wildfire through dorms, but to researchers’ surprise, there was no pattern to suggest that isolating people earlier in the infection helped prevent spread.

Now, students may help determine how normal campus life will be when universities convene in the fall.

“That’s been COVID,” said Christopher DeSouza, a cardiac researcher at the UC-Boulder and a leader of the trial. “The ground is always moving, and things are always [moving] at a much quicker pace.”

In the first week of the study alone, he noted, two students developed COVID-19 before they could even have their first dose of vaccine. 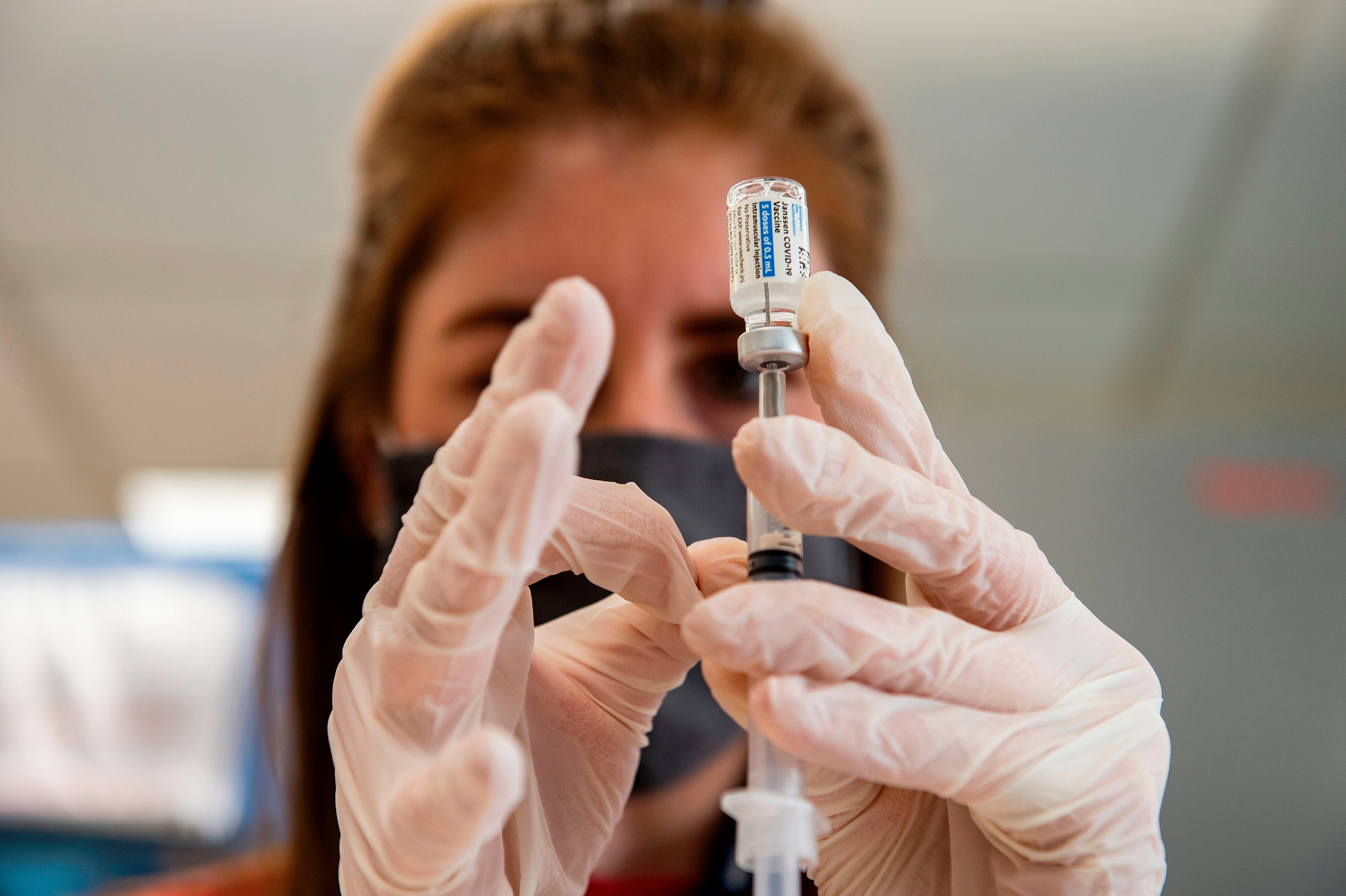