The medical issues that led to Tuesday’s recommended pause in administration of the Johnson & Johnson vaccine are exceedingly rare, government health officials said at a news conference.

Six women who received the vaccine are known to have suffered cerebral venous sinus thrombosis – a rare form of stroke – also had low platelet counts in their blood. Platelets help your blood clot to stop bleeding.

But the illness is severe. One of the six women has died, authorities said, and another is in critical condition. All the known cases are among women between the ages of 18 and 48.

So what should you look for if you are one of the 6.8 million people who have received Johnson & Johnson’s one-dose vaccine, or are scheduled to receive it soon?

First, health officials said the women’s symptoms appeared to begin between six and 13 days after vaccination, with a median of nine days. That’s important because the vaccine commonly causes some flu-like symptoms – including headache, body aches and fatigue – within 24 to 36 hours. Those common symptoms do not appear to signal a clotting issue.

But if severe headache, leg pain, abdominal pain or shortness of breath crop up in the week or two after receiving the vaccine, the recipient should consult a doctor to determine whether he or she has a low platelet count. At this point, government health experts do not have a probable cause but speculated that in very rare cases the Johnson & Johnson vaccine activates platelets in some way, leading to harmful blood clots that can cause strokes.

A low platelet count or history of blood clots, along with those symptoms in that time period, is a sign that caution is needed, said Peter Marks, director of the Center for Biologics Evaluation and Research (CBER) at the Food and Drug Administration, who spoke at the Tuesday media briefing.

“If someone ends up with a very severe headache or any kind of shortness of breath, pain in their legs, pain in their abdomen . . . they would want to seek medical attention, and if there are low platelets at that time,” further discussion with a health care provider is necessary, Marks said.

The pause is also in part to alert health care providers to be on the lookout for these symptoms and advise their patients, authorities said. One important thing for caregivers to know is that treating this condition with common anticoagulants such as heparin can cause additional harm and must be avoided, the officials said.

Though the known cases are all among women of childbearing age, “at this time it’s not clear that there is any association with the oral contraceptive pill,” Marks said. Of course, it’s difficult to make any generalizations based on six cases.

And it’s important to remember how rare this condition is. Among people with normal platelet counts, the disease affects between 2 to 14 per million people per year. That is an annual figure, however, and the Johnson & Johnson vaccine has been distributed for only six weeks. The blood clots also appear to be similar to problems caused by the AstraZeneca vaccine in Europe.

European regulators said it was “plausible” that the clots were linked to that vaccination. They have been reviewing four similar clotting cases after vaccination with the Johnson & Johnson vaccine, which uses a similar technology.

The clots have not been associated with the Pfizer-BioNTech or Moderna vaccines. They use different technologies than the Johnson & Johnson and AstraZeneca vaccines.

Angela Rasmussen, a virologist affiliated with Georgetown University, urged people not to overreact and wait for additional information.

“I am a woman between the ages of 18 and 48 who got the Johnson & Johnson vaccine eight days ago, and I recommend that people do what I’m doing, which is not panic,” she said. “First of all, we don’t know if these six cases are actually associated with the vaccine. We don’t know if those six cases had some other conditions that would have predisposed them to having blood clots like this. We don’t know a lot about it, which is why there’s a pause.”

Anne Schuchat, principal deputy director of the Centers for Disease Control and Prevention, said at the briefing there may have been underlying conditions among some of the six women who suffered these blood clots.

Lisa Maragakis, an associate professor of medicine, infectious-disease and epidemiology at Johns Hopkins University School of Medicine added that “any time a message like this comes out, particularly for those who are within that two week window, there’s a concern about ‘What does this mean for me?'” Maragakis said. “I feel like overwhelmingly the message should be one of reassurance that we don’t yet know if these events are even associated with a vaccine. But even if they are, we know that serious events can happen with vaccine. These events are serious but appear to be, at least at this point, very rare.”

Rasmussen encouraged people to contextualize the available data. Six reports of this condition out of nearly 7 million shots delivered, she said, is “1 in 1,000,000 basically, or 1 in more than 1,000,000.”

She added, “I’m not worried that I’m going to have a blood clot.”

Acting FDA commissioner Janet Woodcock stressed that the risk of clots is tiny in comparison with the danger posed by the pandemic. Vaccines are the best protection against the coronavirus, she said.

“We’re recommending a pause out of an abundance of caution, but on an individual basis, a provider and a patient can make a decision on whether to receive the vaccine,” she said. 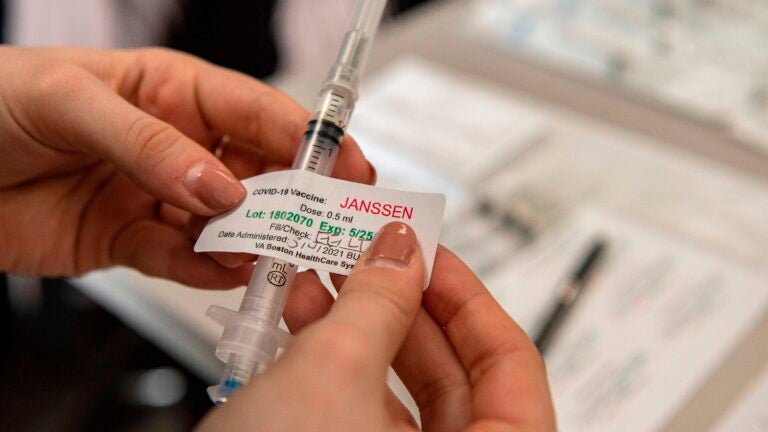 Why would a COVID vaccine cause rare blood clots? Researchers have found clues