However, the Massachusetts governor is downplaying the disruption of the federal government’s recommended “pause” of the J&J vaccine as “minimal,” given the relatively small number of doses the state was set to get in the first place.

“The vast majority of the doses we administer are Pfizer and Moderna doses, and I’ve always thought of the J&J as sort of the accelerant to where we already are,” he said during a press conference Wednesday at the Hynes Convention Center mass vaccination site in Boston.

Baker said that Massachusetts received 11,600 doses of the J&J vaccine this week — roughly 3 percent of its overall state allocation — along with 340,000 doses of the Pfizer and Moderna vaccines. And while the national supply of J&J vaccine has fluctuated wildly in recent weeks due to manufacturing issues, Baker said the state expects to continue to see steady, modestly increasing shipments of Pfizer and Moderna.

Massachusetts instructed providers to stop administering the J&J vaccine on Tuesday, following federal guidance as officials review six isolated cases in which women who received the vaccine suffered a rare and severe type of blood clotting that requires a unique type of treatment. CVS, which is one of the pharmacies that has partnered with the federal government to adminster vaccines, said it was also canceling appointments for individuals in Massachusetts who were scheduled to get the J&J vaccine, but would “follow up with affected customers to reschedule their appointments as soon as possible.”

Massachusetts officials did say Wednesday that the pause could force the state’s homebound vaccination and mobile vaccination programs that relied on the J&J vaccine to at least temporarily convert to Moderna or Pfizer. Health and Humans Services Secretary Marylou Sudders said the switch could make those programs “a little bit more logistically challenging,” but noted that some of the mobile programs already use Moderna.

“We are quite capable of taking the homebound program and converting it into a two-dose program,” Sudders said.

“We’ll use whatever vaccine is available,” Baker said during the press conference.

Baker said the state will continue to follow federal guidance on the J&J vaccine, adding that they “eagerly await” the decision from an emergency meeting Wednesday afternoon held by the Centers for Disease Control and Prevention. Top health officials say they expect the pause to go on for “days to weeks.”

According to Baker, anyone who experienced severe headaches or pain in their legs or abdomen after getting the J&J vaccine should contact their doctor. However, he stressed that those cases have shown to be “extremely rare” and are not to be confused with the normal flu-like symptoms one might experience after getting the vaccine.

Baker also reiterated that the vaccines remain “safe and effective,” noting the decline in COVID-19 cases and hospitalization among those who have gotten the shots.

“The decision that the FDA and the CDC made here, based on six cases out of 7 million administered, to put a pause on this and take a look at it is an example of this system working the way it should,” Baker said. “In an abundance of caution, they put out the word and said we need to take a look at this.”

Baker noted that Sudders got the J&J vaccine and said he would have too had it been available (the governor received his first dose of the Pfizer vaccine last week).

“I’d still take it,” Baker said of the J&J vaccine. “But I think it’s important for the feds to do their homework on this, because the last thing we want to do is make decisions based on anything less than the best available information, and I expect at some point in the not-too-distant future, we’ll hear back from the feds, and they’ll tell us what they think the most appropriate thing to do and the safest thing to do is going forward, and we’ll abide by that decision.” 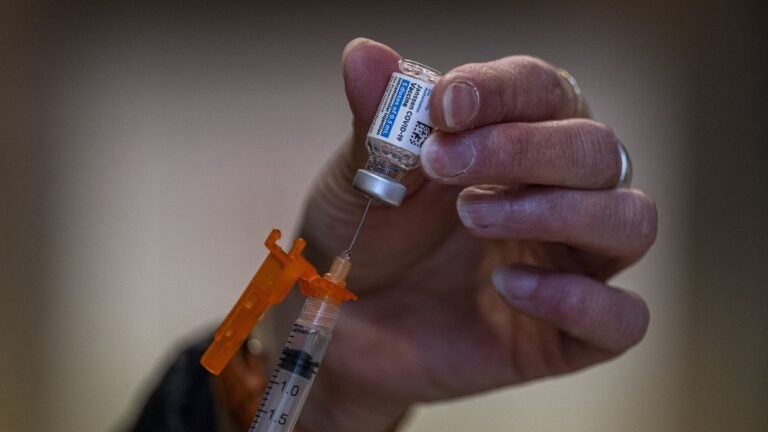