Dr. Anthony Fauci, the nation’s leading infectious disease expert, and Rep. Jim Jordan clashed several times Thursday during a congressional hearing on the end of the coronavirus pandemic, with the Ohio congressman at one point drawing a sharp rebuke from one of his colleagues as he continued to talk over others past his speaking time.

The director of the National Institute of Allergy and Infectious Diseases at the NIH and top adviser to President Joe Biden was among several witnesses who testified before the House Coronavirus Crisis Subcommittee on ending the pandemic.

The heated exchanges between Fauci and Jordan emerged as the congressman repeatedly questioned the doctor about what the threshold or metric would be for when Americans can stop wearing masks and stop social distancing, framing the issue of dropping the public health measures as people getting their “liberties and freedom back.”

“Are we just going to continue this forever? When do we get to the point, what measure, what standard, what objective outcome do we have to reach before Americans get their liberties and freedom back?” Jordan said.

“You’re indicating liberty and freedom, I look at it as a public health measure to prevent people from dying and going to the hospital,” Fauci said.

“You don’t think Americans’ liberties have been threatened the last year, Dr Fauci?” Jordan asked. “They’ve been assaulted. Their liberties have.”

The Ohio Republican continued to press Fauci on when masking and social distancing would no longer be recommended, often interrupting the doctor as he replied.

When the heated back-and-forth dragged on even after Committee Chairman Jim Clyburn said Jordan’s time had expired and the congressman continued to speak over others, Rep. Maxine Waters called out the Ohio Republican.

“You need to respect the chair and shut your mouth,” Waters said.

Later in the hearing, another clash occurred when Jordan again questioned Fauci over how much longer public health measures would be needed and when Americans could get “their liberties back and move on with their lives.”

“You’re asking for a number,” Fauci said. “If I have a number, it would have to be my best estimate, and that would be that the number of infections per day are well below 10,000 per day. At that point, and up to that point, there would be a gradual pulling back of some of the restrictions you’re talking about. Particularly when people are vaccinated more and more. Because it’s a combination of if you’re vaccinated, you’re protecting yourself, for sure. And the more people that get vaccinated in the community, the lower the level of infection will be.”

“No you didn’t, you didn’t give us a time, when do you think this — are we going to be here two years from now wearing masks and Jim Jordan asking Dr. Fauci the same question?” Jordan pressed.

The comment prompted a heated response from Jordan, who told the doctor: “I get to ask you the questions.”

Watch the exchanges below:

Rep. Jordan: “Here’s how it works, Dr. Fauci. I get to ask you the questions.” pic.twitter.com/7ufdQ65zG8 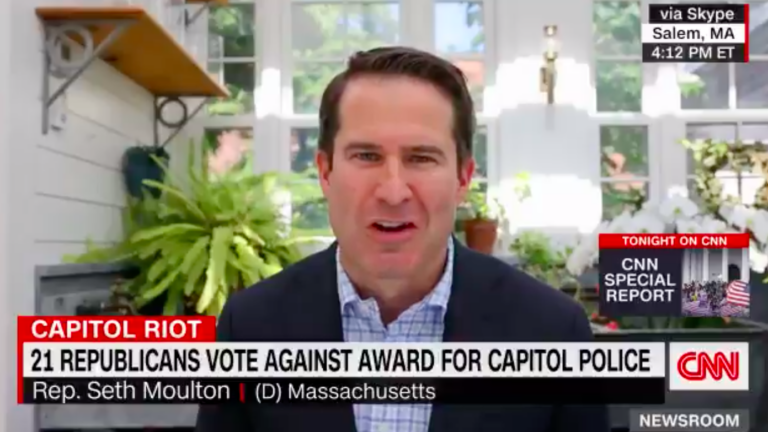 ‘You don’t deserve to be a member of Congress’: Seth Moulton calls out GOP members pushing Capitol riot conspiracy theories