In an effort to increase COVID-19 vaccine access in traditionally underserved communities, Tufts Health Plan and Harvard Pilgrim are deploying a mobile vaccine bus capable of administering hundreds of doses a day to several Massachusetts cities.

The effort begins this Saturday in East Boston, where the bus will stop at Central Square Park. Appointments are required to get the vaccine, with no walk-in patients allowed. Officials say that community organizers will be making calls and door-knocking to invite residents in the surrounding areas to register and schedule an appointment.

Officials say additional stops are planned in Chelsea, Holyoke, and Chicopee over the next several weeks.

The new effort is separate from the government-organized mobile vaccination efforts in Chelsea, Revere, Boston, Fall River, and New Bedford. According to a spokesman, the vaccine supply is coming from doses allocated to the East Boston Neighborhood Health Center.

BOSTON (AP) — Massachusetts was one of several states to receive a shout-out from the White House for its efforts to vaccinate as much of the adult population as possible.

Besides Massachusetts, Slavitt pointed to Connecticut, New Mexico, Maine, New Jersey, Vermont and Hawaii. New Hampshire has crossed the 70% threshold according to Slavitt.

“All of them have turned the corner on the number of cases & hospitalizations. Well done. Let’s all get there,” Slavitt tweeted.

More than 3.2 million Massachusetts residents have received first doses and about 2.2 million people have been fully immunized.

Emerson College is the latest local school to announce plans to require on-campus students to be vaccinated against COVID-19 this fall.

“We will require that all students studying on our campuses be vaccinated in order to attend the 2021 Fall Term,” Emerson President M. Lee Pelton wrote in a message to the Boston college’s community Wednesday afternoon.

Pelton added that it’s the school’s “expectation” that all Emerson staff and faculty will also be vaccinated before they return to campus.

The announcement comes as a growing number of colleges — including Boston University, Northeastern, and Brown — make the vaccine a requirement for students. Like others, Emerson says they will “provide reasonable medical and religious exemptions on an individual basis.”

Pelton also said the college will continue to offer online classes for “undergraduate students who are unable to come to campus,” as well as for students in graduate programs that do not require in-person learning.

With the vaccine requirement and other precautions, Pelton said that Emerson expects to have in-person learning on all campuses, as well as “a more familiar pre-pandemic, on-campus environment.” He said the college — which is currently in a hybrid learning model — will remain “vigilant and adaptive as we follow medical science.”

“Acknowledging that the Fall Term, beginning on August 31, may be transitional to a fully normative environment of teaching, learning and living, I am confident that our careful and well-researched planning with the aid of excellent medical guidance will enable us to respond quickly and appropriately,” Pelton said.

A Roxbury church is now administering up to 400 COVID-19 vaccine shots a day, The Boston Herald reports.

Twelfth Baptist Church, operated in partnership with Boston Medical Center, began offering the vaccines Monday as eligibility in Massachusetts was extended to ages 16 and up.

“The church has always been a central figure when it comes to movements in our history here — a place to come together and organize, and this is no different,” acting Mayor Kim Janey said. “The church is meeting this moment right now in our history … to ensure that folks who need help get the help.”

“That’s been our strategy in Boston — to lift up communities that have been left behind, to ensure that vulnerable populations that have been disproportionately impacted by COVID-19 have equitable access to the vaccine,” she said.

Janey received her second shot of the two-dose vaccine at the Reggie Lewis Center, according to the Herald.

Getting the COVID-19 vaccine is free, and so could be the ride to your appointment.

As vaccination eligibility in Massachusetts expanded Monday to all residents over the age of 16, the Boston-area bike-share program Bluebikes announced it will offer two free rides intended to help users get to their appointments.

Beginning on Monday, riders can use the codes “BLUEVAX1” and “BLUEVAX2” on the Bluebikes mobile app to unlock free Adventure Passes, which include free unlimited two-hour rides for a 24-hour period (rides that go over the two-hour limit incur a $2.50 charge per additional 30 minutes).

The offer — which will run at least through the end of May — will be available across the system’s 10 municipalities: Arlington, Boston, Brookline, Cambridge, Chelsea, Everett, Newton, Revere, Somerville, and Watertown.

“We’re committed to supporting our communities and removing barriers to this critical vaccine, especially in underserved areas,” Kathy Klingler, chief consumer experience and marketing officer at Blue Cross Blue Shield, the title sponsor of Bluebikes, said in a statement.

“Bluebikes is an important part of our public transportation system in Boston, particularly during the pandemic,” Boston’s acting Mayor Kim Janey said. “We’re grateful for Blue Cross Blue Shield of Massachusetts’ support in encouraging every Bostonian to get vaccinated.” 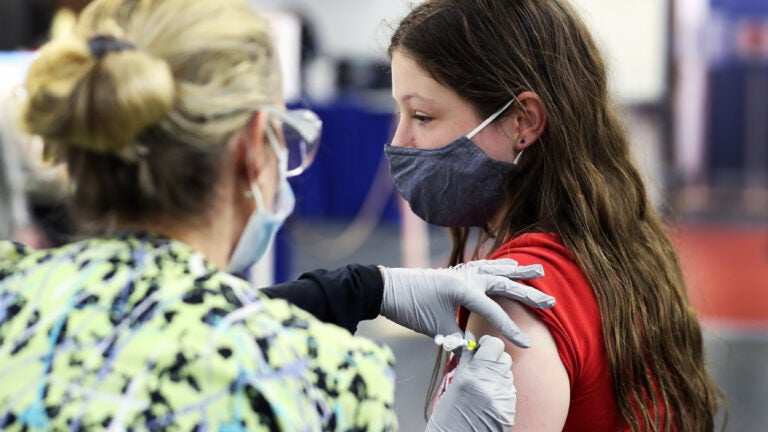