Moderna is making investments to ramp up its global production supply of the COVID-19 vaccine to up to 3 billion doses next year.

The Cambridge-based company announced Thursday it is using its cash balance to fund the increased production, which will likely take hold in late 2021 and early 2022.

The figure depends upon a mix of the standard, two-dose vaccine administered to adults as well as potentially lower doses of booster shots and pediatric vaccines, should they be authorized, according to the company.

Moderna on Thursday also unveiled a rosier forecast of its current vaccine supply rate, updating its manufacturing prediction to between 800 million and 1 billion doses this year.

“As we follow the rapid spread of SARS-CoV-2 variants of concern, we believe that there will continue to be significant need for our mRNA COVID-19 vaccine and our variant booster candidates into 2022 and 2023. We are hearing from governments that there is no technology that provides the high efficacy of mRNA vaccines and the speed necessary to adapt to variants, while allowing reliable scalability of manufacturing,” Stéphane Bancel, CEO of Moderna, said in a statement. “Today we have announced that our investments in Europe, including Spain, France and Belgium, Switzerland, and the U.S. will allow us to deliver up to 3 billion doses in 2022, depending on the mix of product between primary series of vaccination and variant boosters.”

Additionally, the company announced ongoing development data for the current vaccine suggests doses could be stored between 2 and 8 degrees Celsius for a shelf life of three months.

Currently, the vaccine is approved for storage of up to one month between those temperatures and up to seven months when stored at -20 degrees Celsius.

Moderna said storing the vaccine at lower temperatures could make it easier for health workers to administer the vaccine in places such as doctor’s offices and other smaller settings, should it be authorized to do so.

The company also has formulations of the current vaccine and a next generation vaccine in the works that Moderna believes will further extend the refrigerated shelf life.

The announcement Thursday came one day after activists and doctors protested outside the company’s Cambridge headquarters, calling for the biotech firm to share the recipe for its vaccine with the world. 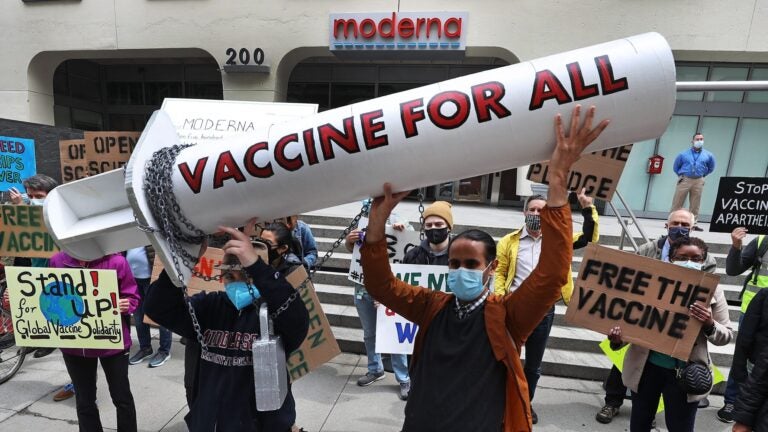 Moderna is pledging to supply the world with billions of COVID-19 vaccine doses. Protesters say it’s not enough.