Mark Rasch hopped on his bike Tuesday in Bethesda, Maryland, pedaled off for an afternoon ride and realized he forgot his mask. As he turned back for it, news came on the radio over his earbuds: The Centers for Disease Control and Prevention said masks were no longer required outdoors for fully vaccinated people unless they were in a crowd.

Rasch, a lawyer, rode on, naked from nose to chin for the first time in a year. He reached nearby Georgetown and found he was nearly alone, in that almost everyone else there remained masked.

“I wondered if there was a store I could go into without wearing a mask to buy a mask?” he said. Instead, he went home and told his wife, “Nothing is changing, but it’s happening quickly.”

It’s springtime of the pandemic. After the trauma of the past year, the quarantined are emerging into sunlight and beginning to navigate travel, classrooms and restaurants. And they are discovering that when it comes to returning to the old ways, many feel out of sorts. Do they shake hands? Hug? With or without a mask?

It’s a confusion exacerbated by changing rules, state and federal, that vary by congressional district or even neighborhood, all while the very real threat of infection remains, in some places more than others.

Many states and cities are scrambling to incorporate the agency’s new counsel into their own rules. New York has ended its curfew. In California, where masks remain recommended, authorities are looking to reconcile the clash of cues.

“We have reviewed and support the CDC’s new masking recommendations and are working quickly to align California’s guidance with these common sense guidelines,” Dr. Tomás Aragón, director of the California Department of Public Health, said in a statement.

Dr. Susan Huang, of the University of California, Irvine, Medical School, explained the conflicted psychology as a function of rapidly changing risk and the difference in tolerance that individuals have for risk. At present, she said, most places have a foundation of people vaccinated but are not near the 80% that marks herd immunity — with no children inoculated.

“We’re between the darkness and the light,” Huang said.

She likened the psychology around masks and other behavior to the different approaches people take to changing their wardrobes at the end of winter: People who are more risk-averse continue to wear winter clothes on 50 degree days, where bigger risk-takers opt for shorts.

“Eventually,” she said, “everyone will be wearing shorts.”

It seems that this psychology may come to define the way the pandemic ebbs, revolving less around public dictate than personal comfort after a stark trauma. For many, the jurisdictional battle is internal, with head and heart clashing over the right personal policy.

“I have hugged friends but in a very clumsy body posture,” said Shirley Lin, who lives in Fremont, California, where she works on business development at a mobile game company. “The bear hugs with the joyful scream will not be seen for a long, long time.”

Her partner lost his mother to COVID-19. She died in August in St. Petersburg, Russia, at age 68. Lin, scarred, is dubious that the risk has passed.

“I don’t think we can slack off on the proper social distancing and masking,” she said. But “we are much more optimistic.”

Masks have also become so much more than mere barrier between germs and lungs. They can keep that too-chatty neighbor at bay or help the introvert hide in plain sight. And vanity? Goodbye to that.

“It saves me having to put on sunscreen and wear lipstick,” said Sara Becker, an associate professor at the Brown University School of Public Health.

She recently had an awkward transitional moment when she, her husband and two children went to an outdoor fire pit with vaccinated neighbors.

“Someone offered me their hand, and I gave my elbow,” Becker said. She was “not quite ready for handshakes or hugs,” she explained, though “pre-COVID, I was definitely a hugger.”

So was Dr. Shervin Assari, but he’s abstaining — at least for now, particularly after the past few weeks. His mother, who lives in Tehran, Iran, was just released from the hospital there after a dangerous bout with COVID-19, and Assari feels chastened anew.

“I had an abstract idea about the risk, and now I really see the risk,” said Assari, who lives in Lakewood, California. He’s “half-vaccinated,” he said, “and terribly scared of COVID-19.”

Assari, a public health expert, is trying to modulate his own behavior given the three different worlds he’s trying to navigate: the working-class neighborhood where he lives in South Los Angeles; his daughter’s elementary school; and the historically Black medical school, Charles Drew University of Medicine and Science, where he teaches family medicine.

Each differs in culture. Most residents of his neighborhood wear masks but also seem to him respectful of individual choice. The elementary school maintains rigid standards with daily checklists to make sure no one is sick or at risk.

And at the medical school, people religiously wear masks, even as the school roils with mistrust of the vaccination, despite the fact it trains doctors, nurses and others in the field.

The skepticism of the medical establishment was centuries in the making — like the infamous Tuskegee experiments — and he doubts it will end soon. But the mistrust at his school is different from that of conservatives: Vaccination may be slow among both groups, but white conservatives may be quicker to rip off their masks, if they wore them at all.

“There’s none of that Tucker Carlson stuff here,” he said.

Carlson, a talk-show host on Fox News, said on a recent show that having children wear a mask outside should “be illegal” and that “your response should be no different than seeing someone beat a kid at Walmart” and to call the police.

In San Francisco, Huntley Barad, a retired entrepreneur, ventured out with his wife this week, and they took their first walk without masks in more than a year.

“We walked down the Great Highway,” he said. “We’re ready to poke our heads out from underneath our rock and perhaps find a restaurant with a nice outdoor table setup — on a warmish night, if possible.”

But he said that their plans for a date night weren’t firm, much like the conflicting guidance and behavior of a nation itself.

“Nothing definite yet,” he said. 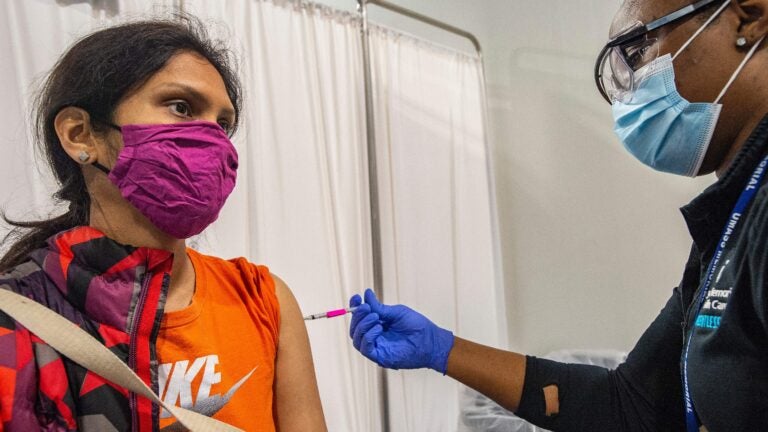