When Dr. Jordan Anderson pictures the early days of the COVID-19 pandemic, he imagines himself outside the room of one of his patients in the intensive care unit at Brigham and Women’s Hospital.

He remembers staring at the man’s ventilator last April and May, wondering if the desperate attempts by the team of medical professionals over several weeks to keep him alive were really what he would have wanted. The man spent weeks ventilated on a heart-lung bypass machine, known as an ECMO.

For the entire time the physician in the internal medicine residency program at Brigham and Women’s was caring for the patient, the man was sedated on the ventilator. It was “touch-and-go,” with doctors having daily conversations with the man’s family.

Anderson never got the chance to introduce himself to the patient, learning about the man only from the pictures that had been placed around his bed and stories shared by family members.

When Anderson was rotated off the ICU, he was prepared that the man would pass away, like many of the other severely ill COVID-19 patients he’d cared for during his time on the unit.

But the patient didn’t die.

About a year after Anderson last saw the man still sedated on the ventilator, he met the recovered patient over Zoom, along with about 15 other physicians and nurses who cared for him during his illness. The Brigham and Women’s doctor shared his experience with the reunion on Twitter.

Anderson told Boston.com he found himself realizing in the moment that it was strange to see the patient’s face, surrounded by family in his home. The man looked so different from when he last saw him, connected to tubes, his facial features swollen while under sedation.

Seeing the man’s face a year later was jarring, tumbling against the memories Anderson had from the time he spent with him in the ICU.

“It was a really profound moment,” he told Boston.com. “I think both myself and many of the other doctors on the call … it forced all of us to really question some of the assumptions and assessments that we were making at the time about his prognosis. He, along with many other patients throughout this pandemic I think, have shown many of us that even when it is very dark days for patients that there can still be hope. And it’s really the power of modern medicine, and it’s the power of the human body and the human spirit to be resilient through enormous adversity.”

The video meeting between the patient and the medical professionals who’d cared for him was organized by his colleague, Dr. Daniela Lamas, a pulmonary and critical care physician, because the man was trying to understand what had happened to him during the weeks when he was sedated and on a ventilator, with no memory of reality.

“He wanted to meet the people who had taken care of him, he wanted to go to the hospital and see where he was for weeks and weeks on end,” Anderson said.

For the doctor, having the opportunity to see a patient who he thought was not going to survive COVID-19 was “one of the most profound and transformative experiences as a clinician.” He said it was humbling to better understand how physicians’ assessments and thoughts about a patient can be wrong. But even more so, it was moving to see the importance of the work done in hospitals.

Given the time that has passed since the early days of the pandemic, Anderson said he suspects that he is not alone in taking a moment to reflect on what has happened. During the early surge of COVID-19 cases in Massachusetts, there was so much fear and anxiety. Front-line health care workers were seeing sick patients who were not doing well. Anderson said the memory of calling families in the middle of the night out of concern that their loved one was not going to make it to the morning is still fresh in his mind. 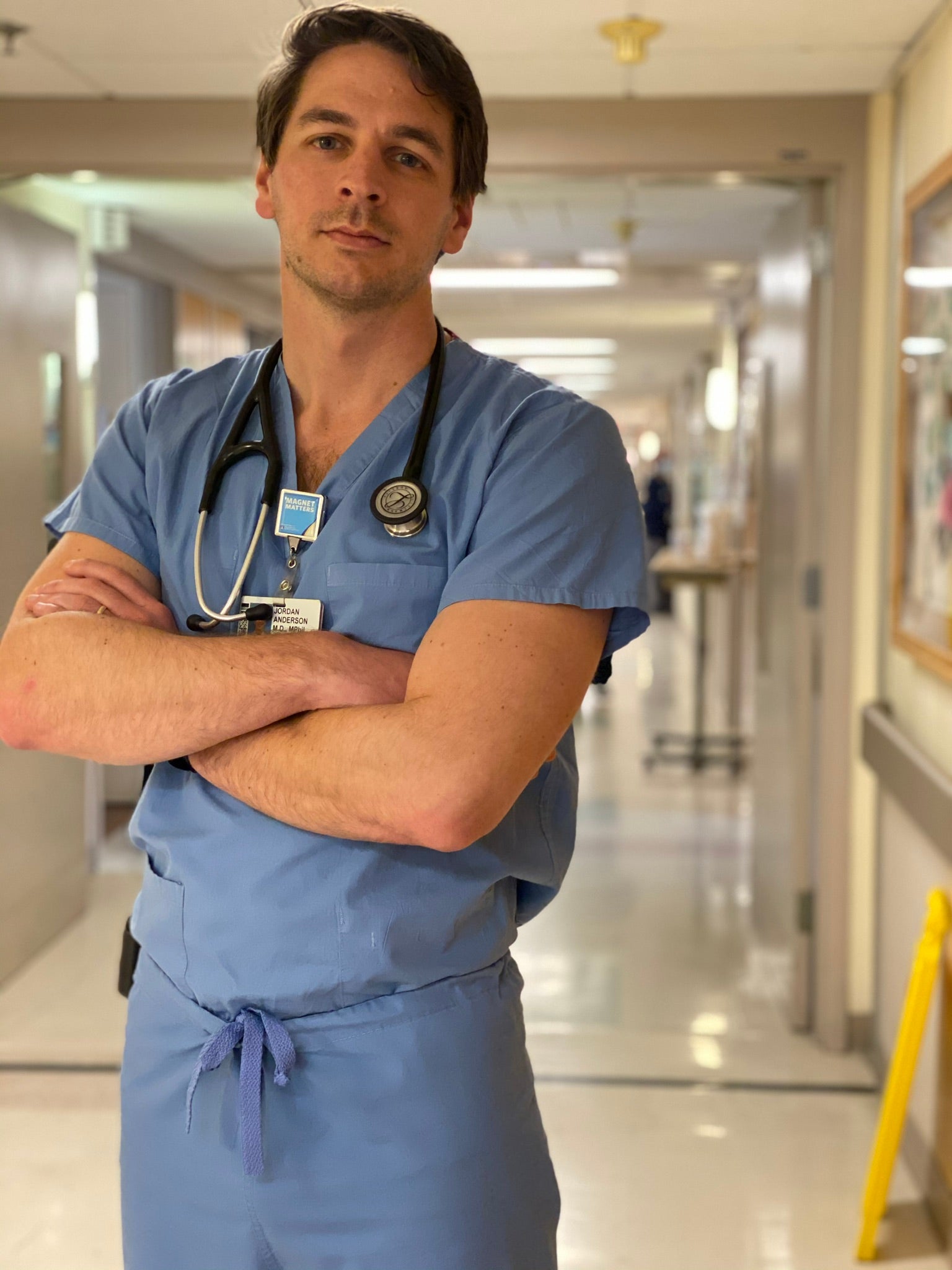 But in the time that has passed, he and others have been able to find some patients — like the man he connected with on Zoom — who survived the disease when they weren’t expected to at the time.

The doctor began creating a list during the pandemic of patients he wanted to continue following after he rotated off the ICU and stopped caring for them.

“Many ended up not doing well and passing away,” he said. “But some of them, it really has been quite moving to see them slowly, day after day, progress and get a little bit better.”

Last April and May, there were two other patients in the ICU he was caring for that he did not think were going to survive when his service changed. He tried to keep up with their progress but was unable to find their records with the information he had at the time.

It wasn’t until January when he was back in the ICU for a rotation that he spotted some papers taped to the wall of a workroom where he was eating a meal late at night. Throughout the pandemic, social workers have been reaching out to families to learn more about the backgrounds and biographies of the patients in the unit so the health care workers can know more about the individuals under their care.

“I was looking at the wall, and I started to recognize some of these patients that were in these stories taped to the wall and it had more demographic information,” Anderson said. “So I was able to go and find some of the patients. And two of them, I ended up looking back through their whole chart and seeing what happened and they ended up surviving and doing well.”

For one of the patients, the first thing that came up when he typed their information into the system was that they had a recent dermatology appointment the week before.

“This person who I didn’t think was going to live, just walked into their dermatologist’s office last week — which, it was just this kind of surreal moment to think about what had transpired over those months,” he said. “And then as I started going through the details of those months, looking at all the different notes from different doctors who had seen that patient over that time period, you could just see what a remarkable turnaround this patient had. And then a long recovery period in a rehabilitation center and then eventually back home.” 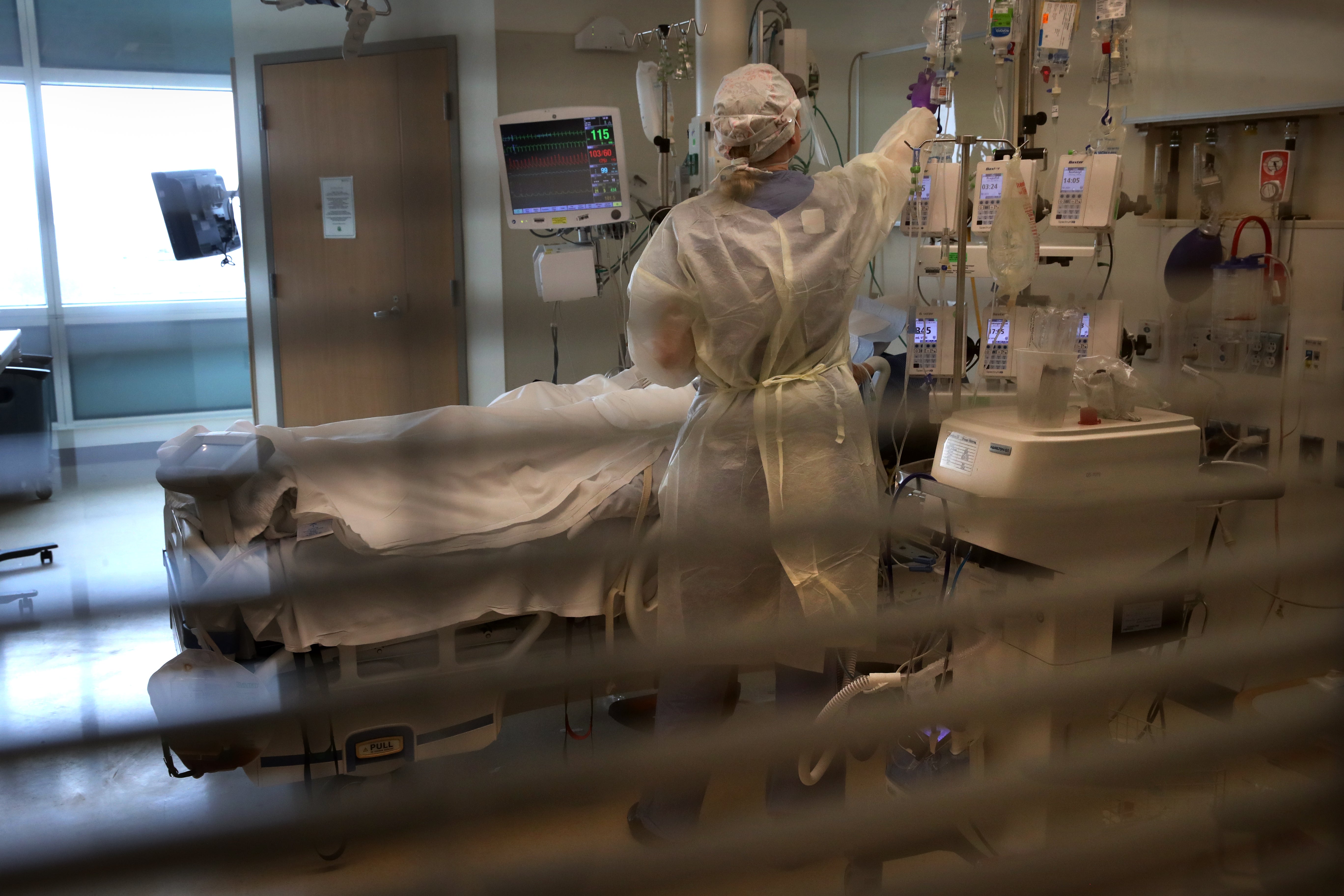 A nurse cares for a patient in the Special Pathogens Unit ICU at Brigham and Women’s Hospital in Boston in 2020.

The chance to connect with the one patient over Zoom and finding others he cared for survived when he assumed they would get worse has provided Anderson a chance for some closure of the raw emotions brought on by being on the front lines of the pandemic.

“I personally have felt that oftentimes when we take care of patients especially in more acute settings where they’re very ill, very sick, we can often have the bias towards thinking the worst case scenario,” he said. “And as physicians, we often feel responsible to prepare families for the worst case scenario. So that’s always in our mind that that’s the trajectory — a patient could always get worse.”

That’s part of why reuniting with his former patient was so profound for his own processing of the last year, he said.

Yet, the pandemic is not over. Very sick patients ill with COVID-19 are still being cared for in intensive care units across the country.

“We are a much better point in this pandemic than we were a few months ago, but there’s still over 700 people dying every day,” Anderson said. “So these experiences are continuing to happen.” 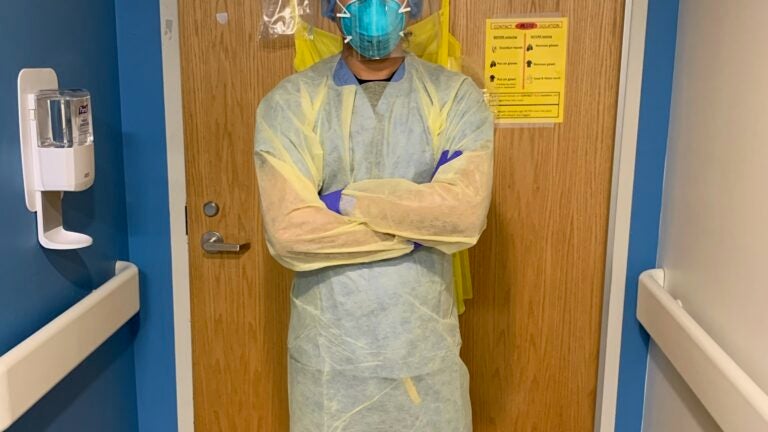 More than a year later, trauma of 1st COVID-19 surge lingers for health care workers in rooms that witnessed so much suffering