The Biden administration, planning for the possibility that Americans could need booster shots of the coronavirus vaccine, has agreed to buy an additional 200 million doses from the drugmaker Moderna, with the option to include any developed to fight variants, as well as pediatric doses.

The purchase, with delivery expected to begin this fall and continue into next year, gives the administration the flexibility to administer booster shots if they prove necessary and to inoculate children under 12 if the Food and Drug Administration authorizes vaccination for that age group, according to two administration officials not authorized to discuss it publicly.

Experts do not yet know when, or whether, booster shots will be necessary. The emergence of variants in recent months has accelerated research on boosters. The current vaccines are considered effective against several variants, including the Alpha variant, which was first identified in Britain and became dominant in the United States.

And now U.S. health officials have classified the Delta variant, which was first found in India, as a “variant of concern,” sounding the alarm because it spreads rapidly and may cause more serious illness in unvaccinated people. Concern over the variant prompted England to delay lifting restrictions imposed because of the pandemic.

Moderna, a company that had no products on the market until the FDA granted its vaccine emergency authorization last year, uses mRNA platform technology to make its vaccine — a so-called “plug and play” method that is especially adaptable to reformulation. Last month, it announced preliminary data from a clinical trial of a booster vaccine matched to the Beta variant, first identified in South Africa; the study found an increased antibody response against two variants of concern.

In announcing the purchase on Wednesday, Moderna said it expected to deliver 110 million of the new doses in the fourth quarter of this year, and 90 million in the first quarter of 2022. The option brings the total U.S. procurement of Moderna’s two-dose vaccine to 500 million doses.

“We appreciate the collaboration with the U.S. government for these additional doses of the Moderna COVID-19 vaccine, which could be used for primary vaccination, including of children, or possibly as a booster if that becomes necessary to continue to defeat the pandemic,” Stéphane Bancel, Moderna’s CEO, said in a statement.

“We remain focused on being proactive as the virus evolves by leveraging the flexibility of our mRNA platform to stay ahead of emerging variants,” he said.

Under its contract with Moderna, the federal government had until Tuesday to exercise the option to purchase doses for future vaccination needs at the same price — about $16.50 a dose — as it is currently paying. Similar conversations are underway with Pfizer-BioNTech, which also makes a two-dose mRNA vaccine, but no agreement has been reached, one of the officials said.

State health departments are also preparing for the necessity of “re-vaccination,” Dr. Nirav Shah, president of the Association of State and Territorial Health Officials and Maine’s top health official, told reporters on Wednesday.

“It may be just a bit too early to tell with finality whether second doses, booster doses” will be needed in the fall, Shah said. “Certainly the better job we do now lowers the likelihood that variants could run loose,” he said.

He added, “There is a direct link between what we do now and what we may need to do later.”

As of Wednesday, about 65% of U.S. adults have received at least one shot, according to federal data. But with vaccination rates slowing down, the administration is still focused on trying to meet President Joe Biden’s goal of having at least 70% of adults get one shot by July 4, and also on addressing the global vaccine shortage.

“With the concerning Delta variant growing and millions more Americans to vaccinate, we are focused on our urgent and robust response to the pandemic,” Kevin Munoz, a White House spokesperson, said in a statement Tuesday.

Last week, at the outset of his meeting with leaders of the Group of 7 major industrialized nations, Biden announced that the United States would buy 500 million doses of the Pfizer vaccine and donate them for use by about 100 low- and middle-income countries over the next year, describing it as America’s “humanitarian obligation to save as many lives as we can.” 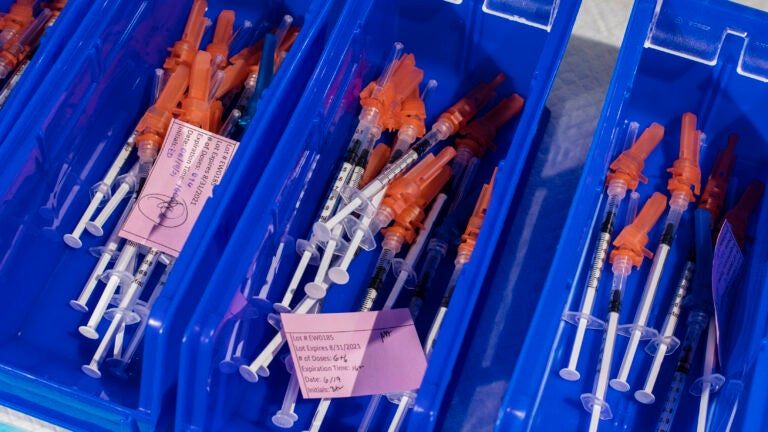 What to know about the lambda variant of the coronavirus