The Food and Drug Administration is planning to warn that Johnson & Johnson’s coronavirus vaccine can lead to an increased risk of a rare neurological condition known as Guillain-Barré syndrome, another setback for a vaccine that has largely been sidelined in the United States.

Although regulators have found that the chances of developing the condition are low, they appear to be three to five times higher among recipients of the Johnson & Johnson vaccine than among the general population in the United States, according to people familiar with the decision.

Federal officials have identified roughly 100 suspected cases of Guillain-Barré disease among recipients of the Johnson & Johnson shot through a federal monitoring system that relies on patients and health care providers to report adverse effects of vaccines. The reports are considered preliminary. Most people who develop the condition recover.

The FDA has concluded that the benefits of the vaccine in preventing severe disease or death from the coronavirus still very much outweigh any danger, but it plans to include the proviso in fact sheets about the drug for providers and patients.

“It’s not surprising to find these types of adverse events associated with vaccination,” said Dr. Luciana Borio, a former acting chief scientist at the FDA under President Barack Obama. The data collected so far by the FDA, she added, suggested that the vaccine’s benefits “continue to vastly outweigh the risks.”

In a statement released Monday, the Centers for Disease Control and Prevention said the cases have largely been reported about two weeks after vaccination and mostly in males, many aged 50 years and older.

The database reports indicate that symptoms of Guillain-Barré developed within about three weeks of vaccination. One recipient, a 57-year-old man from Delaware who had suffered both a heart attack and a stroke within the last four years, died in early April after he was vaccinated and developed Guillain-Barré syndrome, according to a report filed to the database.

The Biden administration is expected to announce the new warning as early as Tuesday. European regulators may soon follow suit. No link has been found between Guillain-Barré syndrome and the coronavirus vaccines developed by Pfizer-BioNTech or Moderna, the other two federally authorized manufacturers. Those rely on a different technology.

Nearly 13 million people in the United States have received Johnson & Johnson’s shot, but 92% of Americans who have been fully vaccinated received shots developed by Pfizer-BioNTech or Moderna. Even though it requires only one dose, Johnson & Johnson’s vaccine has been marginalized by manufacturing delays and a 10-day pause while investigators studied whether it was linked to a rare but serious blood clotting disorder in women. That investigation also resulted in a warning added to the fact sheet.

The new safety concern comes at a precipitous moment in the nation’s fight against COVID-19. The pace of vaccinations has slowed considerably just as a new, more contagious variant called Delta is spreading fast in under-vaccinated areas. Federal health officials are worried that the news could make some people even more hesitant to accept the vaccines developed by Pfizer-BioNTech or Moderna, even though well over 100 million people have received those vaccines, according to the Centers for Disease Control and Prevention.

Almost one-third of the nation’s adults remain unvaccinated. The Biden administration has shifted away from relying on mass vaccination sites and is now enlisting community workers in door-to-door campaigns, supplying doses to primary care doctors and expanding mobile clinics in an attempt to convince the unvaccinated to accept shots.

Johnson & Johnson’s vaccine has played a minor role in the nation’s inoculation campaign partly because the Baltimore plant that was supposed to supply most of the doses to the United States has been shut down for three months because of regulatory violations. The factory, operated by Emergent BioSolutions, a subcontractor, has been forced to throw out the equivalent of 75 million doses because of suspected contamination, severely delaying deliveries to the federal government.

Demand for the shot also plummeted after the April safety pause. At that time, 15 women in United States and Europe who had received the Johnson & Johnson shot had been diagnosed with the disorder. Three had died.

Regulators ultimately decided that the risk was remote and far outweighed by the benefits. They attached a warning to the drug and cleared it for use, but state officials have said that the perception that the vaccine might be unsafe hurt it.

Alex Gorsky, Johnson & Johnson’s chief executive, said last month that he was still hopeful that the vaccine, which has been used in 27 countries so far, would help contain the pandemic overseas. The company has promised up to 400 million doses to the African Union. Separately, Covax, the global vaccine-sharing program, is supposed to receive hundreds of millions of doses.

Studies have showed that the Johnson & Johnson shot protects people against more contagious virus variants, including the Delta variant, and is highly effective at preventing severe COVID-19, hospitalizations and death.

The FDA shares jurisdiction over vaccines with the CDC but is responsible for issuing product warnings. The Guillain-Barré cases are expected to be discussed in an upcoming meeting of a committee of outside experts who advise the CDC.

The FDA has also attached a warning to the Pfizer-BioNTech and Moderna vaccines, but some health officials described that as less serious than the warnings about Johnson & Johnson. Last month, the agency warned about an increased risk of inflammation of the heart or the tissue surrounding it — diseases known as myocarditis and pericarditis — particularly among adolescents and young adults who had received Pfizer-BioNTech or Moderna shots. But the CDC said in most cases, symptoms promptly improved after simple rest or medication.

The Guillain-Barré syndrome is more likely to result in medical intervention, officials said. It occurs when the immune system damages nerve cells, causing muscle weakness and occasional paralysis, according to the FDA. Several thousand people — or roughly 10 out of every 1 million residents — develop the condition every year in the United States. Most fully recover from even the most severe symptoms, but in rare cases patients can suffer near-total paralysis.

The suspected cases were reported in the Vaccine Adverse Event Reporting System, or VAERS, a 30-year-old federal monitoring system. So far, researchers have not identified any particular demographic pattern, but the many of the reports in the publicly available database indicate that the patients were hospitalized.

Guillain-Barré syndrome has also been linked to other vaccines. The CDC has said that flu vaccines, including the 1976 swine flu vaccine, led to a small increased risk of contracting the syndrome, although some studies suggested that people are more likely to develop Guillain-Barré from the flu itself than from flu vaccines. Earlier this year, the FDA warned that GlaxoSmithKline’s shingles vaccine, Shingrix, could also increase the risk of the disease.

About 5 million people in the U.S. have taken Johnson & Johnson’s shot since the April pause was lifted. Millions of doses that have been distributed by the federal government are sitting unused and will expire this summer. 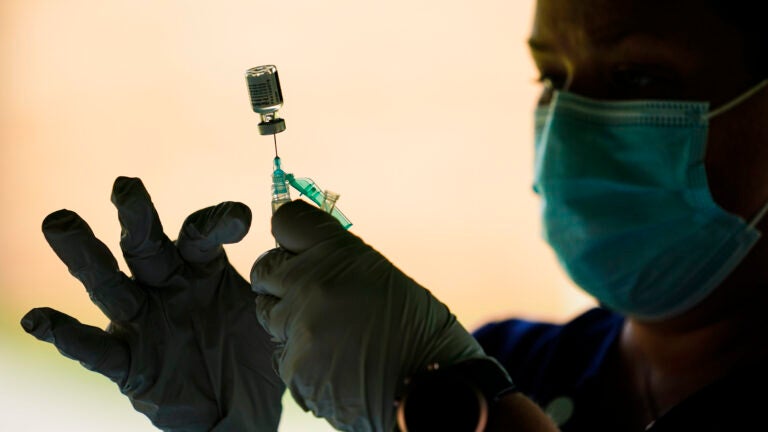 CDC panel recommends boosters for many Americans, not health workers