For the first time in months, COVID-19 trends in Massachusetts seem to be trending, if slightly, in the wrong direction.

Infections and even hospitalizations due to COVID-19 have begun to increase since the Fourth of July weekend. And it turns out that those vaccinated against the disease aren’t completely immune, as state officials revealed that there have been thousands of breakthrough infections — and even dozens of deaths — among people who have gotten their shots since the rollout began.

But how much is this recent news cause for alarm?

Health experts and officials stress that the number of breakthrough infections is incredibly low — and somewhat expected — given the sheer volume of people in Massachusetts who have been vaccinated.

And while the slight uptick in cases comes as the Delta variant has fueled spikes across the country, particularly in under-vaccinated states, COVID-19 rates in Massachusetts for now remain nowhere even approaching their previous peaks.

About those breakthrough cases

The reality is that breakthrough infections do happen, but they are incredibly rare. And cases in which vaccinated individuals are hospitalized or even die due to COVID-19 are even rarer.

As of July 10, 4,450 vaccinated people in Massachusetts had tested positive for COVID-19 since the rollout began this past winter, according to the state’s Department of Public Health.

Of that tiny faction, the overwhelming majority of cases weren’t severe.

DPH officials say that 303 — or 6.8 percent — of the breakthrough infections involved hospitalization and a total of 79 vaccinated individuals in Massachusetts have died.

In other words, the most recent data shows that 0.007 percent — or seven in 100,000 — of fully vaccinated individuals in Massachusetts have been hospitalized. Likewise, less than two in 100,000 have died.

For comparison’s sake, there has been a total of 5,057 deaths due to COVID-19 in Massachusetts since early January; 4,986 of them were people who were unvaccinated.

“These numbers show the reason to get vaccinated,” Todd Ellerin, the director of infectious diseases at South Shore Health, told the Boston Herald this week.

State officials echo that sentiment. Given the high vaccination rates in Massachusetts, DPH says they expect to see breakthrough cases, since the three COVID-19 vaccines authorized in the United States — Pfizer, Moderna, and Johnson & Johnson — are’t quite 100 percent effective against preventing infections, even if they are highly effective.

“I think it’s really consistent with what we expect,” Tufts epidemiologist Dr. Shira Doron told WCVB. “When you have a highly vaccinated population, you’re going to see a lot more cases in vaccinated people.”

State officials stress that the vaccines are the best protection against COVID-19.

The evidence is in the state’s overall COVID-19 rates, which have dropped dramatically since the beginning of the year when the vaccine rollout began — even as nearly all restrictions have been lifted. Hospitalizations are down 96 percent since the beginning of January; deaths due to COVID-19, which were averaging above 70 a day, are down to less than one a day.

“These results provide even more evidence that the vaccines are excellent, not just good, in preventing severe illness and death,” Dr. Howard Koh, a professor at Harvard’s Chan School of Public Health and former Massachusetts health commissioner, told The Boston Globe.

An unexpected uptick in overall cases

Breakthrough infections may have been expected, but Massachusetts is also seeing an unexpected rise in overall COVID-19 rates over the past week.

Since June 25, the average number of new positive COVID-19 tests in the state has nearly doubled, from 64 to 122. DPH officials also reported 208 new confirmed COVID-19 cases Wednesday, the first single-day report over 200 since early June, a time when the state’s testing rate was nearly a third higher.

Over the same time period, the state’s positivity rate more than doubled from 0.31 percent to 0.72 percent.

Following a steady decline this spring, hospitalizations have also increased from a low of 80 statewide COVID-19 patients on July 4 to 102 as of Tuesday. Deaths have continued to fall to an average of less than one a day, though experts have long said that fatalities lag behind other indicators.

All of the rates remains very low — lower than they ever were through all the ups and downs of the pandemic from March 2020 through this past May — but the trends appear similar to the national, Delta-variant-fueled uptick since the beginning of July.

It’s unclear exactly how much of the recent uptick in Massachusetts has been caused by the Delta variant, which officials say is the most contagious iteration of the virus yet.

Cassandra Pierre, a Boston Medical Center epidemiologist and Boston University professor, says the recent uptick in overall cases in “somewhat concerning” given the national rise of the Delta variant.

“We have some data to show that the delta variant is responsible for more hospitalizations than the previous dominant variant and while the jury is out on whether it’s also more virulent (capable of causing severe illness) we’ve begun to see COVID-related death rates rise in some of the hardest hit states,” Pierre told Boston in an email.

“All this is to say, we still need to keep a close eye on the number of cases, hospitalizations and deaths among different age, race and ethnicity demographics (particularly in undervaccinated communities) to ensure we’re not caught by surprised by a small spike this summer,” she said.

While experts have predicted a mild, seasonal uptick in COVID-19 cases this fall, Pierre says the recent increase is earlier than anticipated. She noted that the rainy weather over the Fourth of July weekend may have pushed more gatherings and activities indoors.

DPH guidance says that unvaccinated resident should continue to wear masks when near people outside their household, especially indoors. While the Delta variant has caused some cities and organizations to extend that mask guidance to all individuals, regardless of vaccination status, the still-low case rates have yet to induce such a move in Massachusetts.

However, earlier data on breakthrough infection obtained by the Herald through a public records request suggests that there have been 543 breakthrough cases between June 19 and July 10. That’s roughly 30 percent of the 1,809 positive cases reported by the state over the same time period, meaning 70 percent of new cases were among the minority of residents who were not fully vaccinated.

While over 83 percent of Massachusetts adults have gotten at least one shot, vaccination rates are still hovering around 50 percent for Black and Latino residents, as well as in many lower-income communities.

Pierre notes that even in the most under-vaccinated communities in Boston, positive test rates for COVID-19 remain around 1 percent. Still, those gaps are a worry, Pierre said, as she’s seen hospitalizations shift to the younger 20s-40s demographic and an increased percentage of that group with severe symptoms.

“Given the significant racial disparity in vaccination in our patient population, this signals concern that younger people of color will bear the brunt of infection as COVID slowly becomes endemic in our communities,” she said. 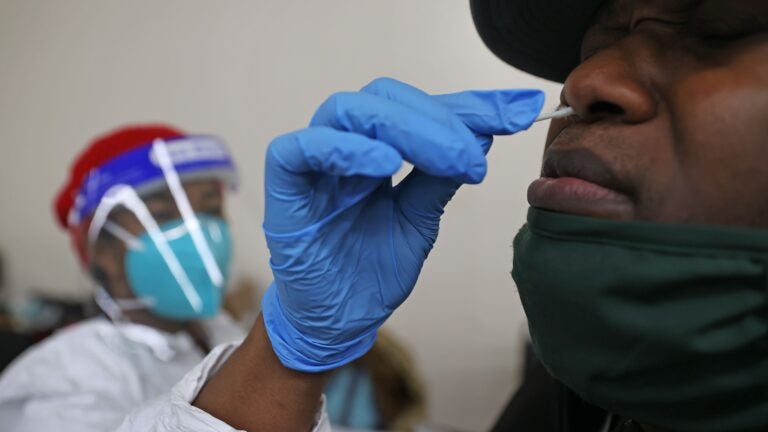