Medical groups representing millions of doctors, nurses, pharmacists and other health workers on Monday called for mandatory vaccinations of all U.S. health personnel against the coronavirus, framing the move as a moral imperative as new infections mount sharply.

“We call for all health care and long-term care employers to require their employees to be vaccinated against COVID-19,” the American Medical Association, the American Nurses Association and 55 other groups wrote in a joint statement shared with The Washington Post. “The health and safety of U.S. workers, families, communities, and the nation depends on it.”

The statement — issued by many groups calling for a mandate for the first time — represents an increasingly tough stance by the medical and public health establishment amid the sluggish pace of national vaccinations. It comes as new cases rip through the nation, driven by the hyper-transmissible delta variant. Confirmed coronavirus infections have nearly quadrupled during July, from about 13,000 cases per day at the start of the month to more than 50,000 now, according to The Post’s tracking. Hospital leaders in states such as Alabama, Florida and Missouri have implored holdouts to get vaccinated, citing data that the shots prevent hospitalizations and even death.

But many workers in the health field remain unvaccinated, despite having priority access to coronavirus vaccines, which first became available in December. More than 38% of nursing home staff were not fully vaccinated as of July 11, despite caring for patients at elevated risk from the coronavirus, according to data collected by the Centers for Medicare and Medicaid Services and analyzed by LeadingAge, which represents nonprofit nursing homes and other providers of elder care.

An analysis by WebMD and Medscape Medical News estimated that about 25% of hospital workers who had contact with patients had not been vaccinated by the end of May.

Health leaders said that the slowed pace of vaccinations, coupled with the threat of the delta variant, compelled them to act.

“We feel that it’s important to sign our name onto this,” said Rachel Villanueva, an OB/GYN and the president of the National Medical Association, which represents more than 50,000 Black physicians and is calling for a vaccination mandate for the first time.

Ezekiel Emanuel, a University of Pennsylvania bioethicist who organized Monday’s statement, said he believes that requiring vaccinations could boost uptake of the shots, beginning with health workers.

“Despite everything — cajoling, making access readily available at any pharmacy, making it free, having the president plead — all of this hasn’t really moved the needle very much in the nation,” said Emanuel, who spent two weeks organizing the joint statement and praised the buy-in from so many groups.

“One of the things that resonated with people is, ‘Look, we’re the medical community. This is a health problem. We need to lead — and we need to have the courage of our convictions,'” Emanuel added.

About 60% of all U.S. adults are fully vaccinated, with the rate of new immunizations slowing since mid-April, according to The Post’s tracking.

Health-care facilities generally have hesitated to mandate coronavirus vaccines for employees, noting the vaccines have yet to receive full approval from the Food and Drug Administration and citing the threat of lawsuits. Fewer than 9% of hospitals have required their workers to get vaccinated, according to tracking by the American Hospital Association, which announced separately last week that it supported such mandates.

Emanuel cited the example of Houston Methodist, which has said it was the nation’s first health system to impose a coronavirus vaccination mandate. Some staff vocally opposed the rule — including more than 150 workers who refused to get vaccinated and left the organization. But 97% of Houston Methodist workers complied, with about 2% obtaining exemptions or deferrals. A federal judge also dismissed a lawsuit filed by former staff who refused to get vaccinated, ruling that Houston Methodist was “trying to do their business of saving lives without giving [patients] the COVID-19 virus.”

Emanuel said that the University of Pennsylvania Health System, which imposed its own coronavirus vaccination mandate two months ago, also has seen a similar uptake in shots.

“The sky didn’t fall,” Emanuel said. “When we do it, and we have a good justification, people respond.”

Hundreds of colleges and universities also have imposed vaccination mandates, which are expected to move forward after a federal judge last week upheld Indiana University’s mandate. The White House has said it will not impose mandates but supports private employers doing so.

Americans’ opinions on requiring coronavirus vaccines vary by industry. A Politico-Harvard poll released this month found that 66% of adults supported health-care organizations requiring employees to get the shots, but Americans were about evenly divided over whether other workers or schoolchildren should be required to do so.

“Our take is that there is a substantial opposition to workers and schoolchildren being required to be vaccinated. It may be getting slightly better over time, but that is a lot of employed people who do not want a requirement,” said Robert J. Blendon, a professor of health policy and political analysis at Harvard University who studies public attitudes. “If I were a legislator looking at our findings, I would be very cautious of forcing a mandate for employed people and parents of kids over 12, particularly in Republican-oriented states.”

Health-care leaders frame vaccinations in their industry as a shared responsibility. Ernest Grant, president of the American Nurses Association (ANA), said his members are reeling from the prospect of another surge of coronavirus cases, many of which might be prevented.

“I get phone calls and emails and conversations on a daily basis from nurses across the country that are saying, ‘I just reached my limit, I’m exhausted,'” Grant said. “It is very frustrating when you know there are vaccines out there that are effective and can drive down the spread.”

About 83% of nurses were vaccinated as of early May, according to an ANA survey — a figure Grant said was heartening, citing data that about two-thirds of nurses in March 2020 said they had no immediate desire to get vaccinated or else were opposed.

“Nurses are people, too,” he said, conceding that some were still raising questions about the vaccines’ effectiveness.

Other health leaders acknowledged that the statement could draw criticism from some of their own members who oppose the effort, adding that it may require several more months to address workers’ questions and give them time to get vaccinated.

“As our members consider a vaccine mandate, they’ll do it thoughtfully. They’ll do it with lots of education. And the ones that have [already] done it, they’ve done it with kind of an on-ramp,” said Katie Smith Sloan, president and chief executive of LeadingAge, which also signed on to the statement. “It’s not something that happens overnight.”

“What we’ve been living through is this tension between the moral imperative to do this to save lives, and the concerns of those who have not yet gotten vaccinated, which are very real,” she added. “I don’t dismiss vaccine hesitancy at all.”

“As an organization, we really have to act in the best interest of public health,” said Villanueva of the National Medical Association. “While we respect everybody’s opinion, and there may be pushback, knowing what has happened to our patients — and even to our own physician community — during the pandemic, I don’t think we can do anything else but to support mandatory vaccination for health-care workers.” 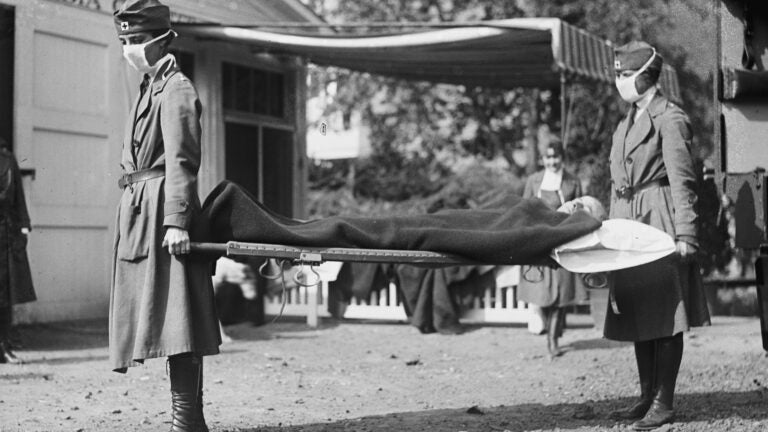