PROVO, Utah — As Mindy Greene spent another day in the COVID intensive care unit, listening to the whirring machines that now breathed for her 42-year-old husband, Russ, she opened her phone and tapped out a message.

“We did not get the vaccine,” she wrote on Facebook. “I read all kinds of things about the vaccine and it scared me. So I made the decision and prayed about it and got the impression that we would be ok.”

Her husband, the father to their four children, was now hovering between life and death, tentacles of tubes spilling from his body. The patient in the room next to her husband’s had died hours earlier. That day, July 13, Greene decided to add her voice to an unlikely group of people speaking out in the polarized national debate over vaccination: the remorseful.

“If I had the information I have today we would have gotten vaccinated,” Greene wrote. Come what may, she hit “send.”

Amid a resurgence of coronavirus infections and deaths, some people who once rejected the vaccine or simply waited too long are now grappling with the consequences, often in raw, public ways. A number are speaking from hospital beds, at funerals and in obituaries about their regrets, about the pain of enduring the virus and watching unvaccinated family members die gasping for breath.

“I have such incredible guilt,” Greene said one morning as she sat in the fourth-floor lobby outside the ICU at Utah Valley Hospital in Provo, which looks out to the mountains where her family once went hiking and four-wheeling. “I blame myself still. Every day.”

The recent surge of infections and hospitalizations among unvaccinated people has brought the grim realities of COVID-19 crashing home for many who thought they had skirted the pandemic. But now, with anger and fatigue piled up on all sides, the question is whether their stories can actually change any minds.

Some people hospitalized with the virus still vow not to get vaccinated, and surveys suggest that the majority of unvaccinated Americans are not budging. Doctors in COVID units say some patients still refuse to believe they are infected with anything beyond the flu.

“We have people in the ICU with COVID who are denying they have COVID,” said Dr. Matthew Sperry, a pulmonary critical care physician who has been treating Greene’s husband. “It doesn’t matter what we say.”

COVID hospitalizations in Utah have risen 35% over the past two weeks, and Sperry said ICUs across the 24-hospital system where he works are 98% full.

Still, some hospitals swamped with patients in largely conservative, unvaccinated swaths of the country have begun to recruit COVID survivors as public health messengers of last resort. The hope is that onetime skeptics might just persuade others who dismissed vaccination campaigns led by President Joe Biden, Dr. Anthony Fauci, and armies of local doctors and health workers.

Theirs are “scared straight” stories for a pandemic that has thrived on misinformation, fear and hardened partisan divisions over whether to get vaccinated.

“People are creating news from their hospital beds, from the wards,” said Rebecca Weintraub, an assistant professor of global health and social medicine at Harvard Medical School. “It’s the accessibility of the message: ‘I didn’t protect my own family. Let me help you protect yours.’”

In Springfield, Missouri, where coronavirus cases spiked this summer, Russell Taylor sat in a hospital gown, an oxygen cannula draped across his face, to offer a provaccine testimonial in a hospital video. “I don’t see how I could not get it now,” he said.

A Texas man who underwent a double-lung transplant after contracting the virus made a plea on local television for others to get vaccinated.

And in a shaking voice, a hospital-clinic administrator in rural Utah described how she had been pummeled by double pneumonia and sepsis after choosing not to get vaccinated. The woman, Stormy, said it had taken weeks to summon the nerve to speak out in a video posted by her local health department. She only did so using her first name because she worried that COVID deniers would say she was making it all up.

“I absolutely was fearful of the negative aspects that could come from it,” she said in an interview this week. “I was part of a problem that I was trying to avoid.”

Some people who were quick to embrace the vaccine are now choosing to speak out about family members who did not. It was a role Kimberle Jones never wanted, but one she embraced after her daughter, Erica Thompson, 37, a mother from St. Louis, died July 4, nearly three months after she had what she thought was a bad asthma attack.

“I want to be a voice for her,” said Jones, who got vaccinated as soon as she was able to. “I really think my daughter would want me to say, ‘Go get vaccinated.’”

It was advice Thompson — like 39% of American adults — did not heed.

Her mother said Thompson had been leery of how quickly the Moderna and Pfizer vaccines had rolled out — the culmination of decades of scientific research. She also believed the government-run campaign was a plot against Black people like her, according to her mother. Vaccination rates for Black and Hispanic Americans lag behind the white population, a gap that researchers attribute to distrust rooted in a history of medical discrimination and a lack of access and outreach.

After scraping by making $10 an hour at call-center jobs, Thompson had recently found a dream job doing medical coding. She went to the hospital coughing and struggling to breathe in mid-May and was on a ventilator within days. Jones said she sang “Beat It” as her daughter was sedated and promised to be there when she woke.

“Her last words to me were ‘Mama, I can’t breathe,’” Jones said.

In Utah, Greene said her husband had left the family’s vaccination decisions in her hands. She initially planned to get the shot as soon as her next-door neighbor, a physician, got his.

But she had concerns about the vaccine, and found plenty of reasons to hesitate when she scrolled through social media or talked with anti-vaccine friends. “You need to watch this,” one wrote to her.

Clicking on a few links took her down a rabbit hole of conspiracy theories touted by anti-vaccine attorneys and YouTubers, and videos in which anti-vaccine doctors and nurses decried the COVID-19 shots as “bioweapons.”

COVID crashed into the family’s world in late June when their two oldest sons brought the virus home from a church camp where nine boys got infected. The virus swept through the family. Then came the day that Greene’s husband, a hunter who hiked across mountains, had to be rushed to the hospital when his oxygen levels cratered.

Now, they measure time in “COVID days.” Greene wakes up dry-heaving many mornings. Her four children — ages 8-18 — stay home while she goes to the hospital, unable to tell their dad about dance class or smashing a hit deep into the outfield during a baseball game.

There are uncertain months ahead as doctors try to repair his damaged lungs and wean him off a ventilator. He was briefly transferred from the hospital to a long-term acute care center last week, a hopeful moment. But doctors found a hole in his lungs, and he was rushed back into the ICU.

“I will always regret that I listened to the misinformation being put out there,” Greene said. “They’re creating fear.”

Even after Greene’s husband was put on a ventilator in early July, vaccine skeptics Greene knew texted her links to misinformation about fertility and hidden vaccine deaths. They sent her boxes of a horse medicine falsely touted as a COVID cure. A business associate of her husband’s made the case against vaccination while he visited Greene in the ICU lobby.

Health experts and scientific studies have shown the vaccines are overwhelmingly safe and effective and are the best weapon against infectious new variants of the coronavirus.

Before COVID, the family’s life was anchored by their faith and community in the Church of Jesus Christ of Latter-day Saints. Now, church friends and neighbors bring dinners by the house and send updates to the congregation about Greene’s husband.

Greene begins her hospital visits with a spiritual reading and ends each night by gathering their children — Hunter, 18; Easton, 15; Betty, 13, and Rushton, 8 — to talk about their father and the prayers he needs.

Her views shifted as the virus ravaged her husband’s body and doctors put him on a ventilator. They shifted as she talked with doctors and nurses about the unvaccinated patients pouring into hospitals and sat outside the ICU, listening to life-flight helicopters arrive. Greene said she had made an appointment to get her children vaccinated. 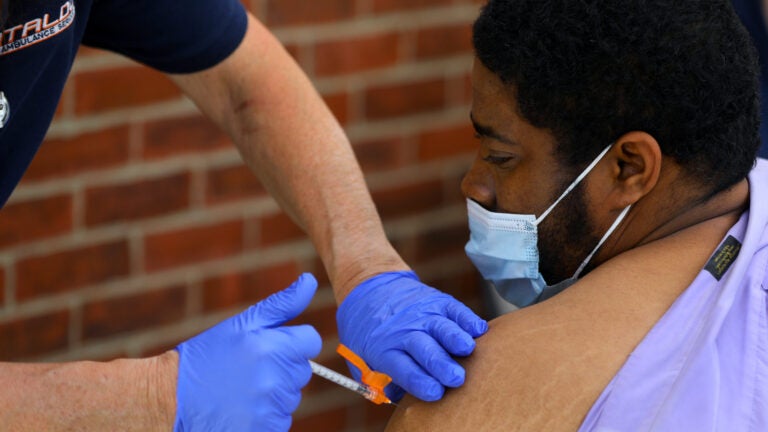