COVID precautions have turned many parts of our world into a giant salad bar, with plastic barriers separating sales clerks from shoppers, dividing customers at nail salons and shielding students from their classmates.

Intuition tells us a plastic shield would be protective against germs. But scientists who study aerosols, airflow and ventilation say that much of the time, the barriers do not help and probably give people a false sense of security. And sometimes the barriers can make things worse.

Research suggests that in some instances, a barrier protecting a clerk behind a checkout counter may redirect the germs to another worker or customer. Rows of clear plastic shields, like those you might find in a nail salon or classroom, can also impede normal airflow and ventilation.

Under normal conditions in stores, classrooms and offices, exhaled breath particles disperse, carried by air currents and, depending on the ventilation system, are replaced by fresh air roughly every 15-30 minutes. But erecting plastic barriers can change airflow in a room, disrupt normal ventilation and create “dead zones” where viral aerosol particles can build up and become highly concentrated.

“If you have a forest of barriers in a classroom, it’s going to interfere with proper ventilation of that room,” said Linsey Marr, professor of civil and environmental engineering at Virginia Tech and one of the world’s leading experts on viral transmission. “Everybody’s aerosols are going to be trapped and stuck there and building up, and they will end up spreading beyond your own desk.”

There are some situations in which the clear shields might be protective, but it depends on a number of variables. The barriers can stop big droplets ejected during coughs and sneezes from splattering on others, which is why buffets and salad bars often are equipped with transparent sneeze guards above the food.

But COVID spreads largely through unseen aerosol particles. While there is not much real-world research on the impact of transparent barriers and the risk of disease, scientists in the United States and Britain have begun to study the issue, and the findings are not reassuring.

A study published in June and led by researchers from Johns Hopkins, for example, showed that desk screens in classrooms were associated with an increased risk of coronavirus infection. In a Massachusetts school district, researchers found that Plexiglas dividers with side walls in the main office were impeding airflow. A study looking at schools in Georgia found that desk barriers had little impact on the spread of the coronavirus compared with ventilation improvements and masking.

Before the pandemic, a study published in 2014 found that office cubicle dividers were among the factors that may have contributed to disease transmission during a tuberculosis outbreak in Australia.

British researchers have conducted modeling studies simulating what happens when a person on one side of a barrier — such as a customer in a store — exhales particles while speaking or coughing under various ventilation conditions. The screen is more effective when the person coughs because the larger particles have greater momentum and hit the barrier. But when a person speaks, the screen does not trap the exhaled particles — which just float around it. Although the store clerk may avoid an immediate and direct hit, the particles are still in the room, posing a risk to the clerk and others who may inhale the contaminated air.

“We have shown this effect of blocking larger particles, but also that the smaller aerosols travel over the screen and become mixed in the room air within about five minutes,” said Catherine Noakes, professor of environmental engineering for buildings at the University of Leeds in England. “This means if people are interacting for more than a few minutes, they would likely be exposed to the virus regardless of the screen.”

Noakes said erecting barriers may seem like a good idea but can have unintended consequences. She conducted a study published in 2013 that looked at the impact of partitions between beds in hospitals. The study showed that while some people were protected from germs, the partitions funneled the air in the room toward others.

So although a worker behind a transparent barrier might be spared some of the customer’s germs, a worker nearby or customers in line could still be exposed. Noakes said most screens she has seen are “poorly positioned and are unlikely to be of much benefit.”

“I think this may be a particular problem in places like classrooms where people are present for longer periods of time,” Noakes said. “Large numbers of individual screens impede the airflow and create pockets of higher and lower risk that are hard to identify.”

To understand why screens often have little impact on protecting people from aerosol particles, it helps to think about exhaled breath such as a plume of cigarette smoke, Marr said.

“One way to think about plastic barriers is that they are good for blocking things like spitballs but ineffective for things like cigarette smoke,” Marr said. “The smoke simply drifts around them, so they will give the person on the other side a little more time before being exposed to the smoke. Meanwhile, people on the same side with the smoker will be exposed to more smoke since the barriers trap it on that side until it has a chance to mix throughout the space.”

Most researchers say the screens most likely help in very specific situations. A bus driver, for instance, shielded from the public by a floor-to-ceiling barrier is probably protected from inhaling much of what passengers are exhaling. A bank cashier behind a wall of glass or a clerk checking in patients in a doctor’s office may be at least partly protected by a barrier.

A study by researchers with the National Institute for Occupational Safety and Health in Cincinnati tested different-sized transparent barriers in an isolation room using a cough simulator. The study, which has not yet been peer-reviewed, found that under the right conditions, taller shields, above “cough height,” stopped about 70% of the particles from reaching the particle counter on the other side, which is where the store or salon worker would be sitting or standing.

But the study’s authors noted the limitations of the research, particularly that the experiment was conducted under highly controlled conditions. The experiment took place in an isolation room with consistent ventilation rates that did not “accurately reflect all real-world situations,” the report said.

The study did not consider that workers and customers move around, that other people could be in the room breathing the redirected particles and that many stores and classrooms have several stations with acrylic barriers, not just one, that impede normal airflow.

While further research is needed to determine the impact of adding transparent shields around school or office desks, all the aerosol experts interviewed agreed that desk shields were unlikely to help and were likely to interfere with the normal ventilation of the room. Depending on the conditions, the plastic shields could cause viral particles to accumulate in the room.

“If there are aerosol particles in the classroom air, those shields around students won’t protect them,” said Richard Corsi, incoming dean of engineering at the University of California, Davis. “Depending on the airflow conditions in the room, you can get a downdraft into those little spaces that you’re now confined in and cause particles to concentrate in your space.”

Aerosol scientists say schools and workplaces should focus on encouraging workers and eligible students to be vaccinated, improving ventilation, adding HEPA air-filtering machines when needed and imposing mask requirements — all of which are proven ways to reduce virus transmission.

The problem, experts say, is that most people in charge of erecting barriers in offices, restaurants, nail salons and schools are not doing so with the assistance of engineering experts who can evaluate airflow and ventilation for each room.

People should not panic when they see transparent barriers, but they should not view them as fully protective, either. Workers and students who have transparent shields around them should continue to wear a mask to lower risk, Corsi said.

“Airflow in rooms is pretty complicated,” he said. “Every room is different in terms of the arrangement of the furniture, the height of the walls and ceilings, the vents, where the bookshelves are. All of these things have a huge impact on the actual flow and air distribution in a room because every classroom or office space is different.” 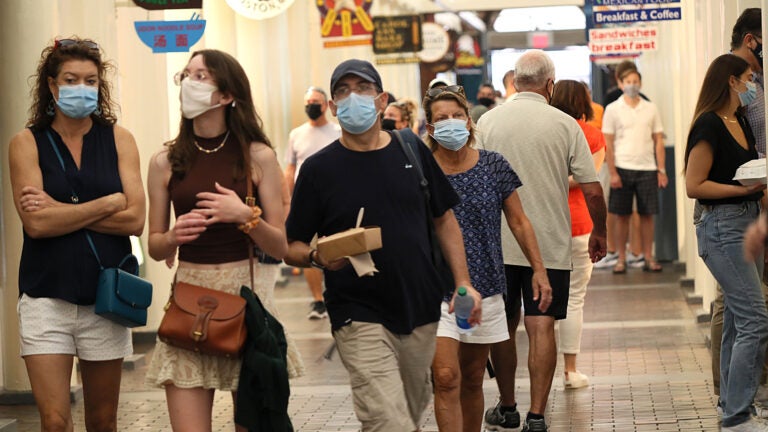 Does my mask protect me if nobody else is wearing one?