A pastor is encouraging people to donate to his Tulsa church so they can become an online member and get his signature on a religious exemption from coronavirus vaccine mandates. The pastor, Jackson Lahmeyer, is a 29-year-old small-business owner running in the Republican primary challenge to Sen. James Lankford in 2022.

Lahmeyer, who leads Sheridan Church with his wife, Kendra, said Tuesday that in the past two days, about 30,000 people have downloaded the religious exemption form he created.

“It’s beautiful,” he said. “My phone and my emails have blown up.”

The rules around religious exemptions for coronavirus vaccines vary widely as each state or institution often has its own exemption forms for people to sign. Experts on religious freedom claims say that most people do not necessarily need a letter from clergy for a religious exemption.

Some institutions request a signature from a religious authority, but Charles Haynes, senior fellow for religious freedom at the Freedom Forum in Washington, said that those institutions could be on a shaky ground constitutionally. Haynes said that if a person states a sincere religious belief that they want to opt out of vaccination, that should be enough.

“He’s not really selling a religious exemption,” said Haynes, who compared Lahmeyer’s exemption offer to televangelists who sell things like prayer cloths. “He’s selling a bogus idea that you need one.”

Lahmeyer, a father of five, also runs an investment company where he buys and sells real estate. Many pastors across the country have decided not to sign religious exemption forms, Lahmeyer said, so he wanted to give people an opportunity to get one signed. He said that the bylaws of the church, which has been running for 70 years, require that for the church to consider someone an online member, they must stream the services through one of the church’s platforms and donate at least $1 to the church. The charismatic nondenominational church has about 300 in-person members.

“I’m willing to sign it no matter what,” he said. “But I want it to have weight. In order for it to carry any weight, you have to be an online member of our church.”

The form Lahmeyer is distributing through his campaign website is a generic one he said he modeled after a state of Oklahoma form. It asks the individual requesting a religious exemption to describe the religious belief or practice that necessitates the request for accommodation. It asks for a pastor’s name and signature, as well as the church’s name and address.

Anyone can get Lahmeyer’s form if they provide their email and phone number. Lahmeyer says he’ll sign anyone’s form but for it to carry weight, they should be members. He said he would not be evaluating individuals’ claims for why they need a religious exemption.

“What if someone says, ‘God told me not to get a vaccine.’ I don’t know if God told them that. I’m not going to argue with that.”

Lahmeyer said he is not anti-vaccine, but he has already had the virus and believes that people whoare infected with it can be treated with medications like ivermectin, which is used to treat parasites in humans and horses. The U.S. Food and Drug Administration says ivermectin should not be used to treat or prevent covid-19.

Lahmeyer said he was motivated to run for office this year after Jan. 6, when Lankford, his opponent and a Southern Baptist, initially said he objected to the certification of the 2020 election results. Lankford changed his mind after insurrectionists stormed the U.S. Capitol as he was giving a speech.

Lankford later apologized in a letter to Tulsa’s Black community for his earlier position challenging the election, which upset Lahmeyer. He does not believe President Joe Biden’s presidency is legitimate and is angry Lankford reversed course. The vaccine mandates have only riled Oklahomans up even more, he said.

“The former vice president has declared war on the freedoms of Americans,” Lahmeyer said, referring to Biden, who last week announced sweeping vaccine mandates. “He’s putting people in a position where people are going to lose their jobs. That’s wickedness.”

Lahmeyer said he enjoyed politics but was not particularly political until the coronavirus pandemic, when he battled local officials over keeping his church open and not requiring masks last year. Earlier this year, former president Donald Trump’s former national security adviser Michael Flynn endorsed Lahmeyer’s candidacy. Flynn, who twice pleaded guilty to lying to the FBI, was later pardoned by Trump.

Haynes, an expert on religious freedom cases, said there’s a long history of the United States granting religious exemptions to people, even if a religious leader doesn’t back their claims.

A student in Texas once won the right to wear rosary beads outside his shirt (in violation of school dress code) despite the fact that the local Catholic leaders consulted by the school district said there was no basis in Catholic teaching for wearing the beads that way. Some people, Haynes said, have taken advantage of religious exemptions in states like California, which removed its religious exemption in 2015 after measles outbreaks.

“We’ve worked hard to carve out religious exemptions for people’s conscience,” Haynes said. “This effects people who really do have conscience claims.” 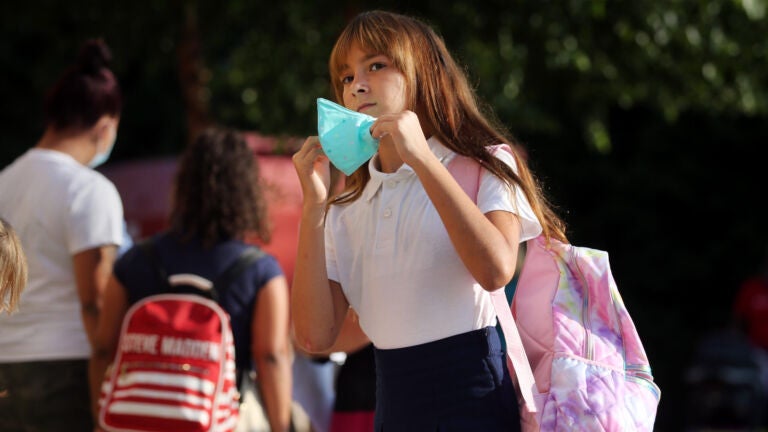