People at risk for severe COVID-19 could soon have a transformative treatment option: antiviral pills that can be prescribed and taken at home to prevent the worst outcomes.

Pharmaceutical giant Pfizer Friday announced that its experimental pill regimen, when taken shortly after symptoms develop, dramatically reduced the risk of hospitalization and death. A different pill developed by Merck and its partner, Ridgeback Therapeutics, is already under review by federal regulators.

If the pills are deemed safe and effective by the Food and Drug Administration in the coming weeks, they are expected to become available right away, although the supply of the Pfizer drug could be limited initially. The companies have already begun manufacturing, with plans to ramp up production more next year.

Vaccines will remain the primary protection against the coronavirus, but easy-to-take medicines that blunt infections could be a powerful addition to the medical tool kit to manage a pandemic that has killed more than 750,000 people in the United States — and equip the world for a future in which the coronavirus continues to circulate. The pills would augment the medical armamentarium, not replace highly protective vaccines, similar to how people receive flu shots but may be prescribed Tamiflu if they do fall ill.

Such treatments must be given within days of symptoms emerging and will depend on symptoms being identified and patients getting tested quickly. The Pfizer drug, Paxlovid, reduced the risk of hospitalization or death by 89% when given within three days of the first symptoms. The Merck-Ridgeback drug, molnupiravir, cut the risk in half when given within five days.

“We’re accelerating our path out of this pandemic,” President Joe Biden said Friday reacting to news of the potential treatment, along with the expansion of vaccine eligibility for younger children and the continued uptake of the vaccine among adults.

“If authorized by the FDA, we may soon have pills that may treat the virus of those who become infected,” he told reporters during a news conference.

Antiviral pills will be one part of the public health toolkit, and there will be room for more than one treatment. Some public health experts believe that in the long run, multiple antivirals will be necessary to create cocktails and combination therapies that ensure that a constantly evolving coronavirus doesn’t find a way to elude the treatment.

The U.S. government is in the process of procuring 1.7 million treatment courses from Pfizer, according to a senior Biden administration official who spoke on the condition of anonymity because they were not authorized to discuss the purchase. There will be an additional option to purchase 3.3 million more.

The government already struck an agreement with Merck to purchase 1.7 million treatment courses of molnupiravir for $1.2 billion.

The effect of the Pfizer drug, a five-day regimen designed to block the virus from making copies of itself, was found to be so strong midway through the study that an independent committee monitoring the clinical trial recommended it be stopped early. The data has not yet been published or peer-reviewed. Pfizer chief executive Albert Bourla told CNBC that the company would submit data to U.S. regulators before Thanksgiving.

“This is amazing news. My overall feeling was relief — it’s been a long path,” said Annaliesa Anderson, the chief scientific officer of Pfizer’s bacterial vaccines and hospital medicine division, who leads the program to develop the drug. Anderson, who has been working on the medicine since January 2020, said it was a “heart-in-your-mouth moment” when she learned the news Wednesday night while driving to Massachusetts to tour colleges.

“We’re looking at end-to-end protection and treatment,” Anderson said. “We have the vaccine for protection, and now we have an opportunity for treatment.”

David Boulware, an infectious-disease physician-scientist at the University of Minnesota Medical School not involved in the research, said the findings were “pretty impressive.” He noted the drug was most effective when given within three days of symptoms, but it remained highly effective when given five days after symptoms appeared — which may better reflect the real world use of the drug.

Pfizer has already begun manufacturing its drug and projects producing more than 180,000 pill packs, each containing a single treatment course, by the end of this year. The company is working to rapidly scale up manufacturing to at least 21 million packs in the first half of next year, with a total production of 50 million packs in 2022. The company did not disclose the drug’s price.

Pfizer is in “advanced discussions” on a licensing agreement to allow other companies to manufacture its drug, “with the goal of expanding capacity for the hardest-to-reach populations,” around the world, according to Gelise McCullough, a spokesperson for the United Nations-backed Medicines Patent Pool.

Pfizer is also conducting studies of its drug in lower-risk patients and to see whether it helps prevent infections in households in which one family member becomes sick.

Drugmaker Merck announced a month ago that its antiviral pill, molnupiravir, cut the risk of hospitalization or death by half in high-risk patients. Regulators in Britain cleared molnupiravir for use this week in people diagnosed with COVID-19, the disease caused by the virus, who have at least one risk factor for severe illness. In the United States, an expert advisory committee to the Food and Drug Administration is scheduled to meet to scrutinize the safety and effectiveness of Merck’s drug shortly after Thanksgiving — a crucial step before a drug is authorized for use. Merck has said it will produce 10 million treatment courses in 2021.

The work on Pfizer’s antiviral drug, called Paxlovid, built off efforts by Pfizer scientists nearly two decades ago to develop treatments for the outbreak of severe acute respiratory syndrome (SARS). Paxlovid combines a new molecule specifically designed by Pfizer scientists against COVID-19 last year and ritonavir, an antiviral drug used to treat HIV that protects that molecule from degrading.

In a clinical trial, participants at high risk of developing severe illness were given the drug regimen — a combination of three pills, taken twice a day — within three days of their COVID-19 symptoms. Half received the experimental drug and half received a placebo. Paxlovid was 89% effective in reducing the risk of hospitalization and death. Among 389 people who received the drug, three hospitalizations and no deaths were reported. Among 385 people who got a placebo, 27 hospitalizations were reported, with seven subsequent deaths.

The trial also included people who were given the drug within five days of symptom onset to test whether there was leeway on timing. The window of opportunity for giving antiviral drugs to thwart acute respiratory infections is short, so people must recognize their symptoms and get tested, and receive results right away for the drugs to be effective. Tamiflu, for example, is often given too late.

The drug was 85% effective five days after symptoms began. For about 600 people who received the drug within five days of symptoms, six people were hospitalized. Among the 600 who received a placebo, there were 41 hospitalizations and 10 subsequent deaths.

Paxlovid blocks a coronavirus protease, an enzyme the virus needs to make copies of itself. It uses a different mechanism than the Merck drug, which disables the virus by garbling its genome and has raised concerns about its potential to cause mutations in people’s cells.

“For me, if I had a choice, I’d pick the Pfizer drug 10 times out of 10,” Boulware said. “It was more effective and there’s less of a safety concern.”

The Washington Post’s Mariana Alfaro and Alice Crites contributed to this report. 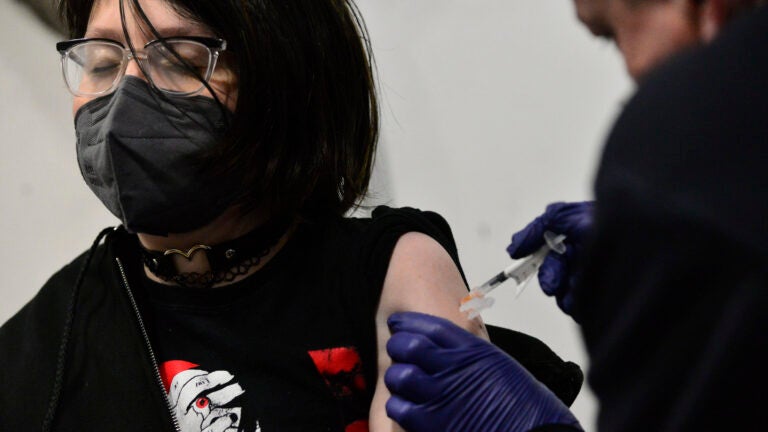 COVID-19 booster drive is faltering in the US