COVID-19 infection rates in Massachusetts have ticked up, again.

Following a two-month-long decline from the delta variant-fueled increase this summer, the state’s positive test rate has risen incrementally over the past two weeks from below 1.7 percent to to a seven-day average of 2.15 percent.

According to data released prior to Veterans Day on Thursday, the state was averaging 1,174 new cases per day over the prior week. For comparison’s sake, Massachusetts averaged less than 100 new cases a day for nearly a month around the beginning of summer in the wake of the COVID-19 vaccine rollout.

Hospitalizations due to COVID-19, which generally lag infection rate trends, continue to slide downward in Massachusetts since topping out at over 700 in mid-September, their highest level since April, according to state data.

As of Wednesday, Massachusetts had 527 patients hospitalized due to COVID-19.

Samples from Boston-area wastewater, which can portend future COVID-19 rates, have also continued their choppy but level trend since summer, which some infectious disease experts suggest could be a sign of the virus stabilizing.

Still, early November was when COVID-19 rates began to rise ahead of the surge last winter, albeit at a time when no one was vaccinated — but also when statewide rules requiring masks indoors, limiting gatherings, and requiring businesses to adhere to safety guidelines were in place.

Dr. Bill Hanage, a professor of epidemiology at Harvard’s T.H. Chan School of Public Health, said during an NPR forum Friday that people should be “cognizant” of the “relatively high-consequence outcomes” that can occur from increasing infections, such as impacts on the health system’s ability to deal with a “backlog of care” that has developed during the pandemic.

With the holidays approaching, Dr. Ashish Jha, the dean of Brown University’s School of Public Health, said the general trends should be reason enough for federal official to make all adults eligible for COVID-19 boosters (which are already available to a broad range of groups) to address the vaccines’ waning effectiveness over time.

Massachusetts also isn’t alone. While the national delta surge has eased, about half of all states — including all of New England — have seen COVID-19 rates increase over the past two weeks, according to The New York Times. New Hampshire has seen the biggest jump in per-capita infections — with a 91 percent increase over the last two weeks.

Still, the region remains relatively well-positioned due to its high vaccination rates.

Massachusetts, Connecticut, Rhode Island, and Vermont — which are among the top five states with the highest vaccination rates — remain among the 10 states with the lowest hospitalization rates in the country. All four, as well as Maine, have over 70 percent of their populations fully vaccinated (New Hampshire is 11th in the country at 63 percent).

Gov. Charlie Baker’s administration credits the fact that more than 90 percent of Massachusetts adults have gotten at least dose for the state having “one of the lowest hospitalization rates in the country.”

“To date, almost 4.8 million residents across the Commonwealth are fully vaccinated against COVID-19, and the Baker-Polito Administration continues to encourage everyone to get vaccinated as it remains the best way to protect yourself and your loved ones,” a spokesperson for the state’s office of health and human services told Boston.com in a statement Friday, noting that vaccines, including boosters, are available at more than 1,000 locations in Massachusetts.

So far, more than 730,000 people in Massachusetts have gotten a booster shot and over 25,000 children in the state have gotten a first dose of Pfizer’s pediatric vaccine during their first week of eligibility.

During the national delta surge, Hanage noted that states with lower vaccination rates among older adults generally had higher death rates from COVID-19.

Since the beginning of the pandemic, 468 fully vaccinated people in Massachusetts — or 0.01 percent — have died from the virus; their median age was 81.2 years, old and 73 percent had underlying conditions, officials say.

Between Oct. 17 and Oct. 30, more than 90 percent of the deaths in Massachusetts due to COVID-19 were among residents over the age of 60 (and 60 percent were older than 80). Hanage said Friday that officials “should not forget that we have other weapons in our arsenal” to protect older individuals, such as deploying rapid tests to nursing homes. 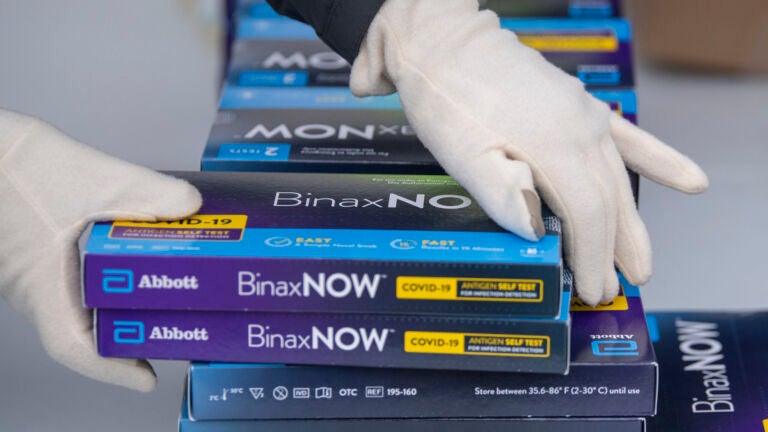