WASHINGTON — A federal appeals court has kept its block in place against a federal mandate that all large employers require their workers to get vaccinated against the coronavirus or submit to weekly testing starting in January, declaring that the rule “grossly exceeds” the authority of the occupational safety agency that issued it.

In a 22-page ruling issued Friday, a three-judge panel on the 5th U.S. Circuit Court of Appeals, in New Orleans, held that a group of challengers to the mandate issued by the Biden administration was likely to succeed in its claim that it was an unlawful overreach and barred the government from moving forward with it.

“From economic uncertainty to workplace strife, the mere specter of the mandate has contributed to untold economic upheaval in recent months,” wrote Judge Kurt D. Engelhardt.

He added, “Of course, the principles at stake when it comes to the mandate are not reducible to dollars and cents. The public interest is also served by maintaining our constitutional structure and maintaining the liberty of individuals to make intensely personal decisions according to their own convictions — even, or perhaps particularly, when those decisions frustrate government officials.”

He was joined by Judges Edith H. Jones and Kyle Duncan. All three are Republican appointees.

In a filing asking the 5th Circuit to withdraw its stay this week, the Department of Justice argued that requiring large employers to force their workers to get vaccinated or submit to weekly testing was well within the authority granted to by Congress to the Occupational Safety and Health Administration. It also said blocking the mandate would have dire consequences.

Keeping the mandate from coming into effect “would likely cost dozens or even hundreds of lives per day, in addition to large numbers of hospitalizations, other serious health effects, and tremendous costs,” the Department of Justice said in its filing. “That is a confluence of harms of the highest order.”

The ruling by the panel of the 5th Circuit is unlikely to be the final word. Some challenges to the mandate are in other circuits, and the cases will be consolidated before a randomly chosen one of those jurisdictions. The Supreme Court is expected to eventually decide the matter.

Dena Iverson, a Justice Department spokesperson, said the Biden administration would defend the mandate through that process.

“Today’s decision is just the beginning of the process for review of this important OSHA standard,” she said in a statement. “The department will continue to vigorously defend the standard and looks forward to obtaining a definitive resolution following consolidation of all of the pending cases for further review.”

President Joe Biden announced in September that his administration would issue such a mandate as one of several steps to try to increase immunization rates and end the pandemic, which so far has killed about 750,000 Americans. Other mandates applied to federal employees and federal contractors.

In early November, OSHA, which is part of the Labor Department, issued the standard for companies with at least 100 employees. It would force them to require unvaccinated employees to wear masks indoors starting Dec. 5. Employees who remain unvaccinated by Jan. 4 would have to undergo weekly testing at work.

The proposed rule makes an exception for employees who do not come into close contact with other people at their jobs, such as those who work at home or exclusively outdoors.

A coalition of plaintiffs — including several employers and Republican-controlled states — immediately challenged the employer mandate in court. Their lawsuit argued that the mandate was an unlawful overreach that exceeded the authority Congress had legitimately delegated to OSHA.

Among other things, they argued that the agency has no power to regulate protections against exposure to disease, as opposed to workplace hazards like asbestos, and that framing the mandate as a workplace safety effort was just a pretext for the Biden administration’s real motivation: pressuring Americans who have been reluctant to get vaccinated.

Englehardt’s ruling strongly sided with their point of view.

OSHA, he wrote, was created by Congress to ensure safe and healthful working conditions but was not “intended to authorize a workplace safety administration in the deep recesses of the federal bureaucracy to make sweeping pronouncements on matters of public health affecting every member of society in the profoundest of ways.”

The judge also challenged the notion that the circumstances of the rule put forward by OSHA, under authority granted by Congress for “emergency” situations, qualified as an emergency.

“The mandate’s stated impetus — a purported ‘emergency’ that the entire globe has now endured for nearly two years, and which OSHA itself spent nearly two months responding to — is unavailing as well,” he wrote. “And its promulgation grossly exceeds OSHA’s statutory authority.”

Some large employers have already decided on their own to impose vaccine mandates on their workforces, including 3M, Procter & Gamble, IBM, Tyson Foods, and the airlines American, Alaska, JetBlue, and United. Most workers have complied, although a small number have quit. 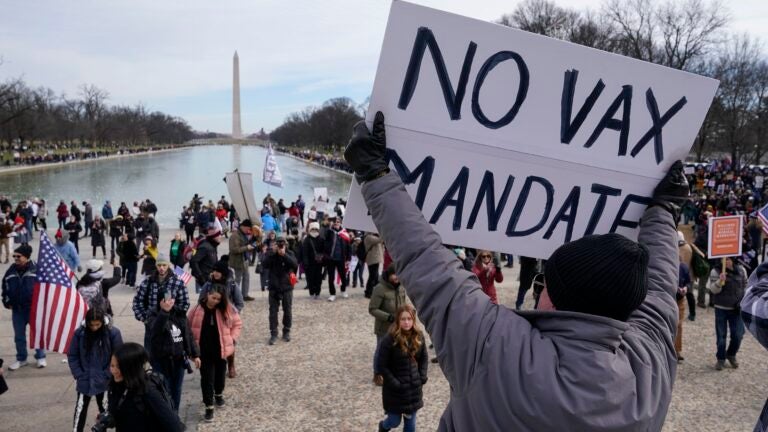