New Hampshire began offering to send free, rapid COVID-19 tests to the homes of its residents on Monday. Countries like the United Kingdom have been doing it for months.

So why isn’t Massachusetts?

Gov. Charlie Baker says there simply aren’t enough testing kits — an issue he blames on the federal government’s approach to the easy-to-use, self tests.

Others say the reason is a lack of political impetus.

While the Baker administration has purchased loads of rapid COVID-19 tests for schools, prisons, and nursing homes, the self-administered kits — which return results in as quick as 15 minutes — can be elusive and relatively expensive for the typical resident.

At the cheapest, the popular Abbott BinaxNOW test kit costs $23.99 for a two-pack; however, amid the increase in demand amid the delta-fueled surge this fall, rapid test seekers across the country are often greeted by empty shelves.

Health experts say that rapid tests can be a convenient safety tool, especially during the season of holiday gatherings. They even appear to be effective in detecting the new omicron variant. And on Monday, New Hampshire Gov. Chris Sununu launched a first-in-the-nation statewide program offering Granite Staters free home delivery of eight Quidel rapid tests while the 1 million test supply lasts.

The program, which is also available in some counties in Washington state, was launched through a partnership with the National Institutes of Health and the Centers for Disease Control and Prevention, is aimed at communities with high COVID-19 infection rates. As of Monday, CDC data showed New Hampshire with the second-highest per-capita COVID-19 case rate in the country.

“I’ve raised this on a number of calls with the White House for months,” Baker said. “And part of it had to do with the fact that the U.S. treated rapid tests as a medical device and not as a public health measure, and put them through a much more complicated and difficult process than they needed to.”

As ProPublica recently reported, testing companies have complained that the Food and Drug Administration’s approval process has been overly stringent and fraught with delays. President Joe Biden’s administration announced in October that it would provide additional funding to help companies navigate the process, after investing $1 billion to boost the supply of rapid tests by December.

Still, some experts say it’s too little too late, a criticism that also echoes in Massachusetts.

“The issue isn’t that we don’t have access to supplies,” says state Rep. Tami Gouveia, an Acton Democrat and candidate for lieutenant governor, who has criticized the Baker administration for relying too heavily on PCR tests.

Gouveia led a letter in August calling on Baker to invest hundreds of millions of dollars of the state’s federal COVID-19 relief funds into rapid COVID-19 tests (State House leaders are still working on how to spend several billion in federal pandemic relief and state budget surplus funds).

“Had Governor Baker heeded our calls, we could have secured ample supplies so that our residents could protect their health, as well as the health of their families and our communities with the use of rapid antigen tests,” Gouveia told Boston.com in a statement. “Instead, Governor Baker chose to delay and ignore the advice of public health experts.”

Baker said Monday that he would “definitely consider distributing [rapid tests] everywhere,” but that the state has to “fight for the supply” it already gets for its programs in schools, nursing homes, prisons, and congregate care facilities.

While he was unfamiliar with New Hampshire’s new program, Baker noted that the Granite State — which has a population a fifth of the size of Massachusetts — does not have a similar “Test and Stay” program for schools, which he credited for saving “somewhere around 140,000 school days” of in-person learning.”

Baker also suggested that prices for the tests have not yet dropped as much as expected.

“There’s a market issue here,” he said on GBH. “In most parts of Western Europe, you can buy these for a buck on the street corner, and we have not reached the point in this country where we have that kind of supply available.” 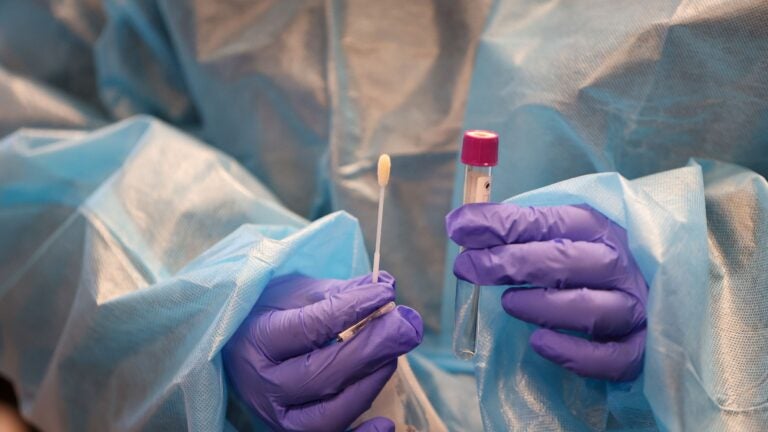