The controversial policy, sharply criticized and rebuked by several of the unions representing city workers, has seen a rather rocky rollout attempt.

The deadline for employees to get a jab of the vaccine or else face termination from their job was pushed back twice last month, as the Wu administration tried to make inroads with the labor groups.

And the policy stalled last week after a Massachusetts Appeals Court judge ordered a temporary stay as the court considers an appeal — filed by three first responders’ unions — of a Suffolk Superior Court judge’s decision to allow the mandate to take hold.

Even outside of court, there promises to be plenty of conversation still to come.

On Wednesday, City Councilor Erin Murphy filed a hearing order to discuss the mandate and any potential agreements the city has tried for with its respective employee unions.

“For them to have agreements and to have this administration come in and basically roll that agreement up and throw it in the trash and totally disrespect, disregard it … it’s a major, major problem,” said Councilor Frank Baker.

When exactly the mandate could take hold, if at all, remains unclear.

Here’s the latest in the ongoing battle over the mandate:

The Wu administration remains convinced its legal argument holds up.

Wu has remained committed to seeing the mandate through, and legal filings from city attorneys this week show City Hall remains convinced it is on firm legal footing in its argument.

In a response to the appeal filed by Boston Firefighters Local 718, Boston Police Superior Officers Federation, and the Boston Police Detectives Benevolent Society, attorneys for the city largely reiterated points made in the superior court and said Judge Jeffrey Locke was right to allow the city to pursue the mandate.

Last month, Locke rejected a request from the trio of unions to block enforcement of the mandate, citing that the “public health emergency now is of such a nature that it outweighs competing claims of harm.”

The temporary stay by an appeals court judge last week came on the heels of the Boston Police Patrolmen’s Association — the department’s largest employee union — voting to reject a proposed memorandum of agreement with the city.

The agreement would have granted the approximately 1,600 union members two mental health days to use this year and a path for officers who are unvaccinated to be rehired if they receive the vaccine.

Some unions have said they want the city to allow unvaccinated employees to be tested regularly for the virus, as had been past protocol, in lieu of the mandate.

On Tuesday, Wu said the variety of city-issued restrictions throughout the pandemic are “not permanent,” but also said virus concerns aren’t going away for some time.

“COVID will be around for a while,” the mayor said. “Even after we are through this surge, we know it is likely that next fall, next winter, there likely will be another surge. But in the meantime, as we’re tracking these numbers, these protections are not permanent. They are to make sure that we are safe in the most urgent moments, and we will continue to balance that guarantee of safety through public health policies that are responsive and clear, as well as the need to provide support to our small businesses.”

For the record, an overwhelming majority of city employees are in compliance with the would-be mandate: More than 95 percent of workers were vaccinated as of last week, the mayor’s office told Boston.com on Thursday.

The Boston Police Department and the Boston Fire Department boasted vaccination rates of over 95 percent and 91 percent, respectively, last week as well.

‘We’ve had no communications’: A Boston firefighters union says Wu is ‘stonewalling solutions.’

As the court system takes up last week’s appeal, Wu is accused of “stonewalling” attempts to reach a solution that works for city workers.

Boston Firefighters Local 718 President John Soares said Wednesday his union has made “no progress” with city officials in recent days because the parties haven’t met.

“We’ve had no communications from the Mayor despite what we continue to read in the newspaper,” Soares said in a statement. “Her continued assertions that progress is being made is misleading at best.”

Asked on Thursday for a comment in response to Soares’s statements, the mayor’s office simply stated the mandate has been delayed due to the court’s temporary stay.

‘Nobody has asked our opinion’: City councilors want to talk how the mandate impacts agreements with workers.

Murphy, an at-large city councilor elected last fall, on Wednesday filed a hearing order to discuss changes to the memorandum of agreement under the vaccine mandate.

While Murphy said she encourages all Boston residents and employees to be vaccinated, the councilor said she also knows “how important strong unions are to the quality of life for all Bostonians.”

“The mandate for COVID-19 vaccination is requiring a condition of work that is not in the contract,” she said. “All workers, I believe, have the right to a safe workplace and also have a right to have their voices heard through collective bargaining. Any changes that are made to the MOA should have the opportunity to be collectively bargained before any change to work conditions go into place.”

Baker, who represents District 3, directed his criticism at Wu, lamenting the council had not been offered the chance to weigh in on the mandate — creating a lack of transparency — nor the opportunity to discuss how the city is addressing the collective bargaining component.

“Why are we allowing this administration to just take those contracts and throw them out without discussions?” Baker asked. “They’ve never come in front of us. Nobody has asked our opinion on where we are on this thing.

“We can’t just throw away collective bargaining like this,” he added later in his remarks. “It’s a bad, bad road to go on.”

Other councilors suggested the city should entertain a testing requirement for employees.

“I firmly believe that testing has to remain a critical component along with social distancing and masking up where appropriate, etc.,” Councilor Michael Flaherty said. “So, that said, I will continue to ask the administration and the municipal unions to come to the table and to bargain in good faith.”

Council President Ed Flynn emphasized the need to come together.

“It’s important that we work together during this very critical time in our city,” he said. 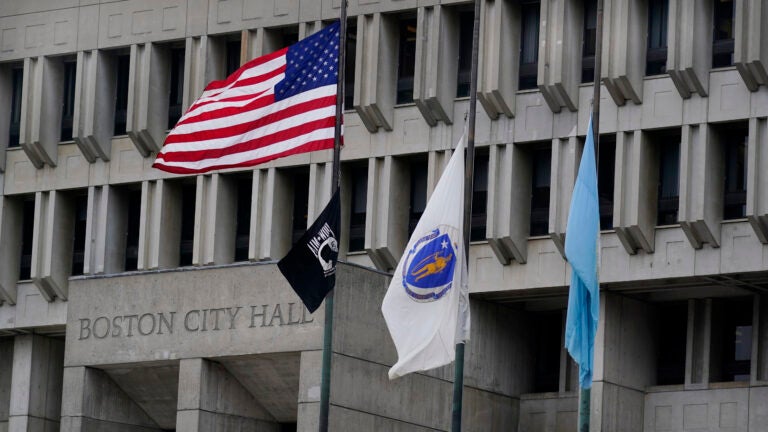