Anyone who has taken the Johnson & Johnson vaccine shouldn’t be concerned, according to the White House Coronavirus Response Coordinator, who also served as dean of the Brown University School of Public Health,

“All of those side effects appear in the first two to three weeks after the vaccine. If you’re beyond that time period you really have nothing to worry about, except the fact that you’ve gotten a very high-quality vaccine that’s going to protect you,” Jha said Friday on “Good Morning America.”

The FDA announced the limitation Thursday after a deeper dive into reports of rare blood clots associated with the Johnson & Johnson vaccine. The updated analysis found that as of March 2022, there were 60 confirmed cases — nine of them fatal — of the rare blood clot condition, called thrombosis with thrombocytopenia syndrome, or TTS.

When asked how big of a risk the Johnson & Johnson shot is, Jha said the blood clots are “extremely rare” and only one in 2 million people ended up having a “really horrible outcome.” Three in a million get any kind of a side effect when it comes to TTS, Jha said.

Who can get the Johnson & Johnson COVID-19 vaccine?

An FDA press release issued Thursday says the Johnson & Johnson vaccine will be limited to people 18 or older who are unable to safely use or access alternative COVID-19 vaccines, like Moderna and Pfizer, that don’t carry the same risks.

But the FDA recommends that adults who would opt not to get vaccinated unless they could take the Johnson & Johnson shot get it, rather than no vaccine at all.

“What FDA is saying is that at this point, even though this is extremely rare, the bottom line is there are other options,” said Jha. “We have Moderna and Pfizer, both of which don’t have this rare side effect. So they’re recommending strongly that people get those instead. But if you have a problem with one of those two vaccines, then Johnson & Johnson is still an option for you.”

“One out of 50 people have some sort of recurrence,” he said. “If you are one of those people who has this recurrence, isolate for a few days until symptoms go away or until you turn negative again.” 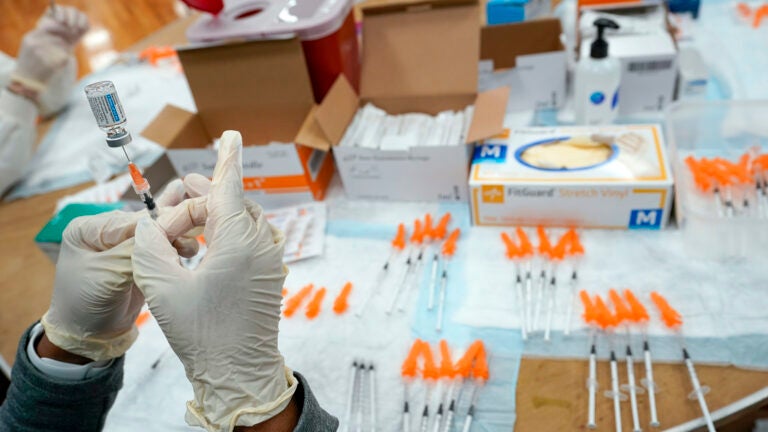