School officials in Northampton are reinstating a mask mandate throughout the district, following a recent surge in COVID cases.

In a letter to the school community, Northampton Public Schools Superintendent John Provost said that the number of cases reported to schools or detected through the district’s pooled testing program more than doubled from 64 to 139. This occurred over the course of a three-day period from last Wednesday to Friday, The Daily Hampshire Gazette reported.

Once Gov. Charlie Baker lifted the statewide mandate in February, the district was one of few throughout the state that continued requiring masks in schools. The Northampton School Committee voted to make indoor masks optional in the majority of situations just one month later, at the end of March, The Boston Globe reported.

“I know there will be a variety of opinions concerning this decision,” Provost wrote, according to the Gazette. “It is not one that I made lightly. Keeping our school community safe and our schools open and functioning are my most important duties at this time.”

The school district’s increase in case counts reflects growing COVID numbers throughout Northampton. According to the most recent data reported by the city, Northampton had 152 new reported cases from April 28 through May 4.

The Centers for Disease Control and Prevention is currently labeling Hampshire County’s COVID-19 Community Level as “medium.” Over the last week, the county has seen an increase of about 34 percent in total cases, according to the CDC.

Northampton’s decision reflects similar trends throughout the state. For seven consecutive reporting weeks, Massachusetts students and staff have experienced an increase in COVID cases. For the week ending May 5, the Department of Elementary and Secondary Education said there were 8,079 new student cases and 2,636 new staff cases, the Globe reported.

The Chelsea School Committee voted on April 13 to lift the district’s mask mandate on May 9. However, Superintendent Almi Abeyta announced on May 6 that the decision was being reversed due to high case counts. The CDC currently marks Suffolk County as having a “high” community level.

Following that classification from the CDC, school officials in Arlington, Belmont, and Cambridge released announcements recommending mask usage, but did not reinstate full-on requirements, the Globe reported. 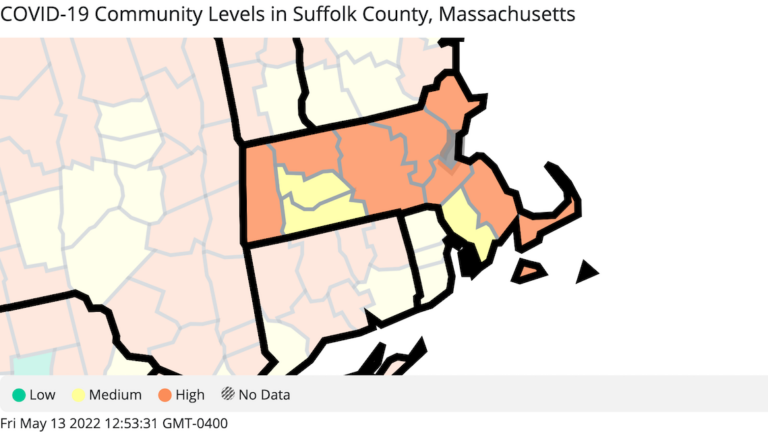