A high school student who was murdered in East Boston allegedly by the MS-13 street gang had been relocated by law enforcement before the gang’s members and affiliates tracked him down in central Massachusetts and killed him, according to federal court transcripts that contain details of the murder.

The transcripts show gang members allegedly mutilated 16-year-old Christofer de la Cruz by cutting off his hand, viciously hacked him to death with machetes, and shot him twice on January 10.

After de la Cruz identified MS-13 members who he said stabbed him in a separate attack in May, law enforcement moved de la Cruz and his family out of Chelsea.

But it wasn’t far enough. After spending months trying to track him down, the gang allegedly kidnapped the teenager from his new home and drove him back to East Boston before killing him and dumping his body on Falcon Street.

“My hands smelled like a dead body that day,” said a man called “Seco,” according to a transcript of a conversation that was secretly recorded by a federal informant who was driving de la Cruz’s alleged killers around the Boston area after the murder.

In the recorded conversations, the alleged gang members and affiliates address one another only by their MS-13 nicknames.

The gruesome details were revealed during Perez’s detention hearing in federal court on March 9. Perez is one of dozens of alleged gang members facing charges in a massive federal sweep of the transnational street gang led by U.S. Attorney Carmen Ortiz’s office, which was unveiled on January 29.

De la Cruz is one of five people in the Boston area who prosecutors say were murdered by MS-13 since 2014. In the months before de la Cruz died, two other teenage boys were also found murdered, allegedly at the hands of MS-13.

A spokesperson from the U.S. Attorney’s office declined to comment, citing the pending investigation.

In the transcript, one of the suspects said that a man named “Sangriento” chopped off de la Cruz’s hand. Prosecutors say “Sangriento” is 20-year-old Edwin Gonzalez.

Inside the car, Gonzalez allegedly said that “chopping the victim was like cutting rocks” and that murdering de la Cruz “messed up his machete” — especially when he hit him on the head, or the “coconut.”

“The kid was shitting himself because two of the kids from his clique [were] already gone,” Perez said, according to prosecutors.

Gonzalez then allegedly looked up an article about the murder on his phone, and said “… he knew two MS guys had been locked up because of the victim,” according to the transcripts.

A man called “Demente,” who prosecutors say is Edwin Diaz, 18, laughed in response.

“They just got hooked up, because there is no witness anymore, and he had ratted.”

According to prosecutors, Gonzalez was also upset with the actions of another alleged gang member who goes by the nickname “Ninja.” In the government’s most recent indictment, prosecutors identified “Ninja” as Rigoberto Mejia and charged him in de la Cruz’s death.

“‘Ninja’ shot him twice and shouldn’t have done that,” said Gonzalez, according to prosecutors.

Attorneys for Perez, Gonzalez, Diaz, and Mejia did not respond to requests for comment.

At the hearing, Chelsea Police Detective Scott Conley, a member of the federal gang task force, said that he’d communicated with de la Cruz for about a year and a half, along with other social agencies, and that de la Cruz was a member of a rival gang called 18th Street.

According to court documents pertaining to the stabbing, Conley was alerted to de la Cruz’s assault by a Massachusetts General Hospital clinician.

“[De la Cruz] knows who attacked him and his friend but did not want to tell police the night of the incident for fear for him and his family,” the clinician told Conley, adding that de la Cruz wanted to talk to Conley and “cooperate with the investigation.”

Conley went to de la Cruz’s apartment to take photos of his injuries, and later assisted him and his family in moving out of Chelsea.

“[De la Cruz] gave statements that, with other evidence, supported charges against two defendants,” according to Jake Wark, a spokesperson for the Suffolk County District Attorney’s office. An array of head shots of more than 50 alleged MS-13 gang members is displayed during a news conference at the U.S. Attorney’s office in Boston on January 29.

Had he survived, de la Cruz would have been called to testify in the case, Wark said. Galicia-Barillas and Tizol’s trial for aggravated assault and attempted murder is scheduled for July 19.

The DA’s office is prohibited by law from discussing witness protection policies. Wark added that in the course of the Chelsea prosecution, de la Cruz moved out of Chelsea to central Massachusetts, “… where by every indication he was safe.”

Despite several attempts, de la Cruz’s family could not be contacted for this story. The Boston Globe reported that de la Cruz came to America from Guatemala illegally in 2014, and his family said he wanted to return home after he was stabbed. His mother, Ingrid de la Cruz, told the Globe her son was waiting on paperwork.

The federal informant who recorded these conversations, whose identity is being protected by authorities, played a pivotal role in the federal indictment against MS-13.

The informant was paid by the task force and received assistance with his immigration status, Conley testified. His car was rigged with audio and video recording devices, Conley told the court.

The informant climbed the ranks within MS-13 during the course of his cooperation, according to Conley.

“At some time at the beginning of the case [the informant] had the opportunity to be what they refer to as ‘jumped’ into the gang. [The informant] was then jumped into the MS-13 gang, and he was officially a member,” Conley said, according to court transcripts.

MS-13, also known as Mara Salvatrucha, is a gang that originated in Los Angeles in the late 1980s by men who survived a brutal civil war in El Salvador. Its members have a long history of violently killing those who communicate with police.

Some of this history is detailed in an affidavit presented in Perez’s case by FBI special agent Jeffrey E. Wood Jr., who wrote that “two rules are held above all else” in MS-13: to kill informants and their families, and to attack and kill all rival gang members.

MS-13 affiliates must climb a totem pole from from “paro” to “chequo” and then, finally, to “homeboy,” which is the designation for a full-fledged member. Being “jumped in” or becoming a “homeboy” involves being beaten by fellow members while a clique leader counts to 13, according to Wood.

According to the indictment, to become a member, chequeos “usually had to engage in some significant criminal activity on behalf of MS-13, usually at least one murder of a rival gang member and a demonstration of loyalty by coming to the aid of or supporting an MS-13 member.”

Five days after de la Cruz’s death, on January 15, the informant allegedly picked up Perez and another alleged MS-13 member. The three drove around, got something to eat, and then picked up the knives, machetes, and bloody clothes from de la Cruz’s killing at an apartment on Brenan Street in East Boston, according to the court transcript. Then they drove to Deer Island to bury the evidence.

When the informant asked the man prosecutors say is Perez if he was getting rid of the gun, he replied, “No, that thing has a lot of work to do still.”

During the drive, Perez allegedly said he had wondered if he would be able to sleep after committing such a violent act. He said he wasn’t having any problems.

“Someone that causes harm, they deserve harm,” Perez said, according to court documents.

After burying the evidence in the woods on Deer Island, the informant called the Massachusetts State Police.

Members of the federal task force unearthed a pair of jeans, a sweatshirt, knives, and other cutting instruments with chipped blades. All of them were covered with blood. 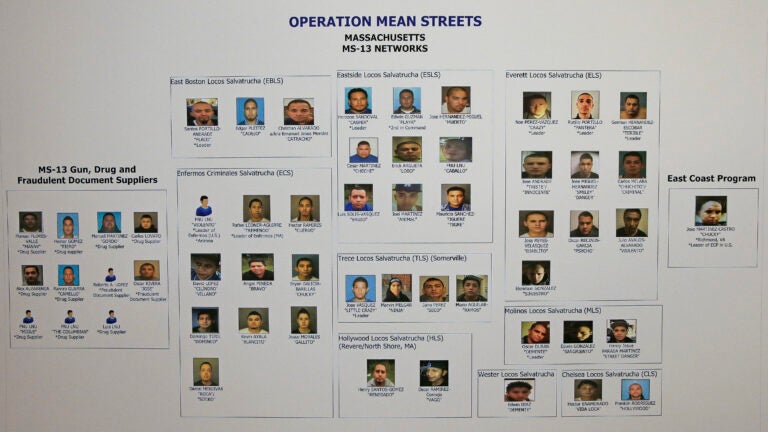