A figure slinks out of the late-night shadows, stepping onto the cobblestone streets of Old San Juan, the historic district of the Puerto Rican capital city. In the orange glow falling from nearby street lamps, a long knife flashes from his hand.

The figure jams the blade into Adam Anhang, a 32-year-old Canadian real estate developer and recent transplant to the island. As the vicious attack continues – the figure stabs Anhang again and again before crashing a loose cobblestone over his head – Anhang manages to call out to his nearby wife, Aurea Vazquez Rijos, a former Puerto Rican beauty queen.

When San Juan authorities eventually rushed onto the scene on Sept. 22, 2005, Vazquez Rijos was loaded into an ambulance with cuts and bruises. Anhang, however, was already dead.

Blood was spilling across the island that year. In 2005, Puerto Rico notched 766 homicides, a murder rate that was three times higher than New York, NBC’s “Dateline” reported in 2008. Anhang’s death was originally thought to have been another part of this violent wave, a robbery gone bad – until the victim’s family realized the young man’s money was still on his body.

The curtain was only rising on a saga that would play out across the globe for more than a decade. An innocent man would be arrested and convicted of the murder. Private investigators would snoop through European cities. The complex red tape of international extradition law would cause endless delays. And a clever trap would be sprung by authorities, leading to more red tape and court dates and waiting.

But finally, the contorted criminal case stemming from Anhang’s death came to an end last week.

On Friday, Vazquez Rijos, 38, her sister, Marcia Vazquez Rijos, and an ex-boyfriend, Jose Ferrer Sosa, were all sentenced to life in prison for their part in a complex murder-for-hire plot, the Associated Press reported. According to federal prosecutors, Vazquez Rijos plotted her husband’s death in a greedy gambit to grab his millions.

But it was Vazquez Rijos’s globe-trotting exploits after her husband’s murder – and the Anhang family’s tireless pursuit – that earned the case international attention. The European press dramatically dubbed her “The Black Widow.”

Years after the murder, her pregnancies would take on critical legal importance for judges weighing international treaties.

But in the beginning, a surprise pregnancy is what threw Vazquez Rijos told Anhang together.

Anhang had come to Puerto Rico after a remarkably successful career. The son of an attorney in Winnipeg, Canada, Anhang had always seemed pointed toward the business world – he showed up to his first day of kindergarten with a briefcase, “just like his dad,” his mother, Barbara Anhang, told “Dateline” in 2008.

“I never remember him as a little boy,” his father, Abe Anhang, said in the same interview. “He was a little man.”

Anhang graduated from the University of Pennsylvania’s Wharton School of Business. He found early success running a number of start-ups, including a gambling software company. With the financial windfall from those ventures, he moved to Puerto Rico in 2004 with an eye toward developing condo and hotel projects on the island, according to Global News.

Early in his time on the island, Anhang met Vazquez Rijos, a widow and former beauty contestant who had once been crowned Miss Puerto Rico Petite, Global News reported. The two quickly became an item, moving in together in late 2004.

Then, in early 2005, Vazquez Rijos hit Anhang with a surprise: she was expecting a child. A devout Catholic, she and her family reportedly told her boyfriend that marriage was the only option. Anhang and Vazquez Rijos wed in a small ceremony that March. Anhang did not even tell his family up north he was getting married.

Soon after, Anhang learned there was no pregnancy. He felt the baby had been a ploy to force a wedding. “He told me that there was no baby and that he felt like he’d fallen for the oldest trick in the book,” a friend told “Dateline.”

Anhang made a go at his new union. He reportedly bought Vazquez Rijos a nightclub to run called the Pink Skirt. But the relationship nose-dived within a few months. Anhang told his wife he wanted a divorce. She reportedly resisted a split. Anhang began to worry for his safety, and even hired a bodyguard.

“Adam had expressed that he had fear of her underworld knowledge,” another friend told “Dateline.” “I guess she had these shady characters that are in some way drug related that would come down to her business.”

Those tensions appeared to lift on Sept. 22, 2005, when Vazquez Rijos asked Anhang to dinner to finalize a divorce settlement. He went alone – without his bodyguard – and dined with his wife at a restaurant in Old San Juan. As the couple strolled the cobblestone streets, the killer pounced.

Following the murder, Anhang’s father traveled to the island. Three weeks after the death, police arrested a 22-year-old restaurant dishwasher named Jonathan Roman Rivera who matched an eyewitness description of the attacker, the National Post reported at the time. Two years later, Roman Rivera was convicted of Anhang’s death and sentenced to 105 years in prison.

But as Anhang’s family began to learn more details about their son’s crashing marriage, they were convinced the man implicated by Puerto Rican authorities was innocent. No physical evidence linked Roman Rivera to the crime. If robbery had been the motive, why wasn’t Anhang’s money taken?

“I knew there was a terrible miscarriage,” Abe Anhang told Global News. “This young man had no reason to do what he did. She had every motive in the world.”

Money was that motive, the family felt. Under the terms of the couple’s prenuptial agreement – which valued Anhang’s wealth at more than $24 million – Vazquez Rijos was entitled to a maximum $360,000 in a settlement, the National Post reported. As a grieving widow, however, she had a better claim, and six months after the murder, Vazquez Rijos sued the Anhang family for $8 million of the estate, “Dateline” reported.

After Roman Rivera’s conviction, Anhang’s father approached the FBI with his doubts. The agency dispatched a team of agents to reexamine the crime, and eventually federal authorities found witnesses placing Alex “El Loco” Pabon Colon at the scene. A dealer who reportedly sold drugs to customers at the Pink Skirt, he confessed that he had killed Anhang after Vazquez Rijos agreed to pay him $3 million. The payment never materialized after the crime. He pleaded guilty and agreed to cooperate with prosecutors.

But by then, Vazquez Rijos had split.

Unwilling to let their son’s killer slip away, the Anhangs hired a private investigator, who tracked Vazquez Rijos to Florence. The destination was likely not an accident. The Italian government will not extradite fugitives to the United States who are facing the death penalty. Vazquez Rijos lived openly in the European city as a tour guide.

From these reports, the family learned Vazquez Rijos was attempting to keep herself farther outside the reach of U.S. law.

Safe for the time being, she needed to obtain permanent residency to completely protect herself. In 2008, Vazquez Rijos became romantically involved with an Italian air-conditioning contractor and gave birth to twin daughters. As the mother of Italian citizens, she was even less likely to face extradition, Global News reported.

American authorities went to unique lengths to finally grab the wanted woman in 2013. That year, American and Spanish law enforcement, posing as members of a fictitious Spanish travel agency, contacted Vazquez Rijos with a job offer in Madrid. On June 30, 2013, she boarded a plane for Spain. At the Madrid airport, while she waited for her luggage, Interpol agents took her into custody.

“I got a call 10 minutes after she landed,” Abe Anhang told Global News.

According to the BBC, as she waited in a Spanish prison, she became sexually involved with a male inmate, an Italian national serving a sentence for a drug offense. Vazquez Rijos again became pregnant, and petitioned a Spanish judge to block her extradition because she was now the mother of a Spanish citizen.

After two years of court dates, and after U.S. prosecutors promised not to seek the death penalty, Vazquez Rijos and her 1-month-old daughter boarded an FBI jet for Puerto Rico in September 2015. On the island, Vazquez Rijos was taken into custody and her baby was placed in state care. (Vazquez Rijos’s twin daughters remained in Italy with their father.)

Vazquez Rijos and her two accomplices, her sister, Marcia, and her ex-boyfriend, Sosa, went to trial last August. Federal prosecutors showed how the three orchestrated the crime, offering Pabon-Colon money for the murder, while Anhang’s wife set the trap by asking him to dinner. Witnesses recounted how after Pabon-Colon stabbed and beat Anhang, Vazquez Rijos had him knock her to the ground, so as to avert suspicion.

On Oct. 3, 2018, a jury found all three defendants guilty of murder-for-hire.

Last Friday, 12 years of ugly suspicions and painful delays and thorny international legal fights ended with a federal judge’s decision to send the three defendants to prison for life. The sentencing was announced in a San Juan courthouse not far from the cobblestone street where Anhang bled out, the AP reported.

“Are you happy now?” Vazquez Rijos reportedly called to Abe Anhang as he left the hearing.

“Shut up,” the grieving father replied. 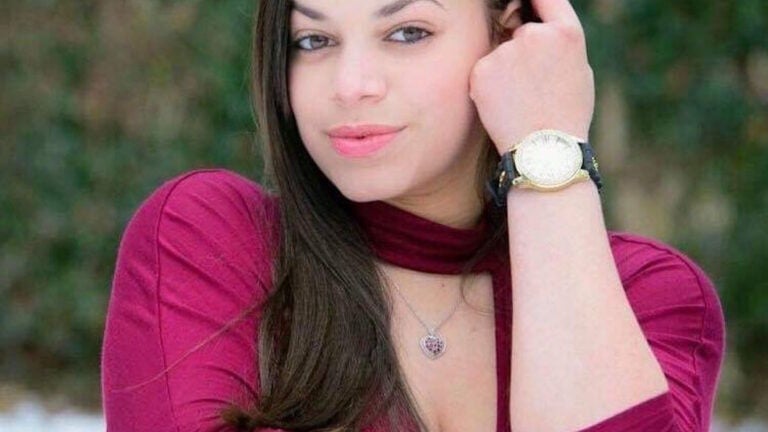 A Hudson man is being charged with murder after he allegedly shot his pregnant girlfriend, 20, in the head