Cynthia Hoffman thought that Denali Brehmer was her best friend. The two teenagers had met while attending the same high school in Anchorage, and Cynthia posted photos of the two of them on her Instagram account, striking goofy poses at a school dance. “My bff,” she captioned one picture, according to the Anchorage Daily News.

But after Cynthia disappeared, it became clear that the 19-year-old had been tragically wrong. On June 4, two days after her family reported her missing, police found Cynthia’s body on the bank of the Eklutna River, near a hiking trail on the outskirts of Anchorage. Her feet were duct-taped together, and she had been shot in the back of the head.

Funeral services for 19 year old Cynthia Hoffman will be Thursday at Faith Community Church in Anchorage. Cynthia was murdered by who she thought were friends last Sunday at #ThunderbirdFalls @ktva pic.twitter.com/1JcThB913R

Authorities said Friday that Brehmer, 18, orchestrated the murder and recruited four friends to help her, thinking that a man who she met on the internet would pay her $9 million or more for filming it. While officials haven’t said why Cynthia, who went by “CeeCee,” was targeted, her family told the Daily News that she had a developmental disability that caused her to operate intellectually at a seventh-grade level, and likely made her vulnerable.

“Her disability just made her want to have friends,” her father, Timothy Hoffman, said. “That’s all she wanted, was just to be her friend.”

Hoffman, a handyman who had taught his daughter to be his “right-hand man,” knew something was wrong when his daughter didn’t show up on June 2 to collect the money he owed her from a recent job, he told KTUU. It was unlike her to stop picking up her phone, and to not call and say where she was.

The next morning, when Cynthia still hadn’t showed up, Hoffman notified the police. Burning with nervous energy and not content to sit still while they looked for his daughter, he took matters into his own hands.

“I put out search parties,” he told the station. “I drove my motorcycle through woods and bike paths. I floored it all over town doing speed limits I should not have been doing looking for my kid.”

It was too late. On June 4, a knock on the door confirmed his worst fears: Cynthia was dead.

While he searched for his missing daughter, Hoffman had been trading text messages with Cynthia’s best friend, whom he knew as “Angela.” The teenager had been with his daughter right before she vanished, and told him that she had dropped Cynthia off at a local park at her request. In messages that Hoffman provided to KTUU, Angela sounded distraught over Cynthia’s disappearance, writing, “I hope she comes home safely she’s my best friend.”

In fact, as Hoffman soon learned, Angela’s real name was Denali Brehmer. And she knew a lot more than she was letting on.

According to court documents obtained by the Daily News, Brehmer had formed an online relationship with a man who called himself “Tyler,” and claimed to be from Kansas. He had convinced her that he was a millionaire, and offered to pay her $9 million or more to “rape and murder someone in Alaska,” then send him videos and photographs.

Brehmer agreed to the arrangement, court documents say. She allegedly recruited four of her friends to help her, offering them a cut of the money if they helped orchestrate and carry out the murder.

On June 2, Brehmer and 16-year-old Kayden McIntosh borrowed a friend’s car to pick up Cynthia and drove with her to the northern outskirts of Anchorage, claiming that they were going to go hiking, authorities allege. They brought the 19-year-old to the Thunderbird Falls trail, a popular hiking path that cuts through a mile of birch forest before reaching a spectacular 200-foot waterfall. But instead of heading for the falls, they abandoned the trail and followed another path that ran alongside the Eklutna River, walking until they found an isolated clearing.

The teenagers bound Cynthia’s hands, feet and mouth with duct tape, according to prosecutors. Once she was restrained, McIntosh allegedly took Brehmer’s 9mm handgun and shot her in the back of the head. They left her body in the river.

“I’m sorry everybody, my family, my friends,” Brehmer reportedly said in a video that she posted on Snapchat afterward. “I guess you will hear from me when you hear from me, but I won’t be back for a long time. I’m sorry, I didn’t mean to do it.”

It wasn’t until later that Brehmer learned that she had been catfished, prosecutors say. All along, she had been sending photos and videos to “Tyler,” not knowing that his name was actually Darin Schilmiller – a 21-year-old who lived in Indiana instead of Kansas, looked nothing like the photo he had sent her online and wasn’t a millionaire. When first questioned by police on June 6, two days after Cynthia’s body was found, Brehmer allegedly claimed that the three teenagers – Cynthia, McIntosh and herself – had gone to Thunderbird Falls to take pictures of each other wrapped in duct tape. She said that she had no idea that McIntosh planned to shoot the 19-year-old.

Further investigation yielded a stomach-churning discovery. Police got a search warrant for Brehmer’s iPhone, and found child pornography “in plain view,” court records obtained by Alaska Public Media said. In a text message conversation with Schilmiller, who was identified as “Babe” in her contact list, she had detailed her plans to sexually assault a teenage girl and film it for him.

“Gonna go buy weed first,” Brehmer wrote, according to court documents. “I wanna get her high for it so she doesn’t fight me.”

Later in the conversation, Schilmiller allegedly told Brehmer that he wished he had never “made a deal” with her in the first place. “[W]e can meet but once I see a cop I’m telling him or her that I made you rape people and killed cece,” he wrote, apparently referencing Cynthia’s nickname.

Once she learned that she had been duped, Brehmer admitted that Schilmiller had recruited her to commit a murder, prosecutors said. She also said that he had directed her to sexually assault two minors, one who was 8 or 9 years old, and another who was 15.

FBI agents were unable to find videos of the younger child, though they did find that she had sent Schilmiller child pornography that featured the 15-year-old victim, according to court documents. Investigators have also not found evidence that Cynthia Hoffman was raped, as Schilmiller allegedly requested.

Schilmiller, Brehmer and McIntosh were indicted Friday on murder and conspiracy charges, according to the Alaska Department of Law. So were 19-year-old Caleb Leyland, who allegedly lent Brehmer and McIntosh his car in exchange for a promised $500,000, and two juveniles whose names have not been released.

Authorities have shared few details about the involvement of two juveniles because of their ages, but KTVA reports that the juvenile female told police that she was present when the murder was being planned, while the juvenile male admitted that he had agreed to help kidnap and murder Cynthia.

According to the Daily News, Schilmiller also faces federal child pornography charges and is awaiting extradition to Alaska. The investigation is ongoing, and it’s not yet clear if Brehmer will face separate child pornography and sexual assault charges, the paper reported.

It wasn’t immediately clear if any of the six defendants had an attorney.

“I have one thing on my mind, and that’s to send all six of them to hell,” Timothy Hoffman told KTUU on Thursday, as hundreds gathered for a memorial service in Cynthia’s honor. “And I ain’t gonna rest until it’s done.”

Visit How good are the Patriots now? Consider where they started. 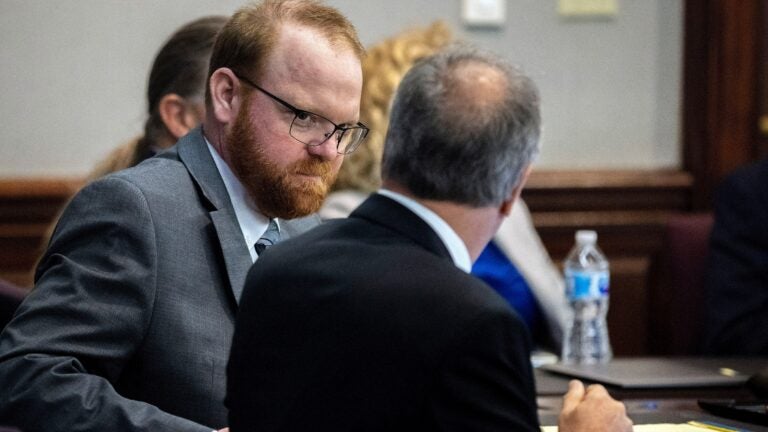