When Beronica Ruiz went to pick up her 12-year-old son from school in Passaic, New Jersey, last week, it wasn’t the first time that day she needed to be there. Hours earlier, Ruiz and her husband had met with the school’s vice principal over concerns that their son was threatened by other students who allegedly chanted, “All Mexicans should go back behind the wall,” the family’s attorney told The Washington Post.

The couple were upset the school didn’t inform them about the taunts, but left the June 19 meeting feeling “somewhat reassured” after the vice principal said he would contact the students and their parents, said Daniel Santiago, the lawyer.

But as Ruiz, pushing her 1-year-old daughter in a stroller, walked home from Passaic Gifted and Talented Academy School No. 20 with her son that afternoon, the boy noticed they weren’t alone. Three boys trailed behind – and he recognized them.

The son “turned to his mother and said, ‘Mom, those are the children that were threatening me and they’re following us,’ ” Santiago said.

Moments later, a 13-year-old allegedly attacked. Santiago said the teen first punched Ruiz’s son in the face. When Ruiz, 35, tried to step in, the teen hit her and “threw her to the ground,” causing her to lose consciousness, Santiago said.

“This was a brutal hate crime and it was committed by a 13-year-old,” Santiago said. “I don’t know what circumstances could give rise to a 13-year-old boy having such hate in his heart that he would commit this brutal attack and leave a woman essentially to die in front of her children without any remorse or any twinge of conscience.”

Ruiz was hospitalized for two days after the alleged beating, which left her with facial fractures and a concussion, he said.

On Tuesday, the Passaic County Prosecutor’s Office announced that the 13-year-old, who fled the scene, had been arrested and charged. He faces one count each of aggravated assault and simple assault, and has been released to his parents pending an appearance in family court, according to the news release. The attack was condemned by Passaic City Mayor Hector Lora, who said in a statement to The Post that he was “outraged,” adding, “What happened to the mother is unacceptable.”

“This incident is being taken extremely seriously I have met with and spoken personally with the family,” Lora said, “I have met with my Chief of Police, local officials and school administration as well as board members to make sure there is accountability and that this family receives justice as well as any help and resources we can provide so they can heal and feel safe.”

Santiago maintains that the violent attack could have been avoided had the school responded differently to the initial bullying complaint and plans to file a lawsuit on the family’s behalf. School officials did not respond to requests for comment late Tuesday.

“Just practically speaking, if the boy wasn’t in school, if he had been disciplined for actually using racially-charged slurs, this attack would not have happened,” the attorney said.

The 13-year-old suspect is African American, Santiago said. Ruiz and her husband are Mexican and are in the U.S. on work permits while they await green cards; their children are American citizens.

The day before the alleged assault, Santiago said, Ruiz’s son was in the school cafeteria when a group of students started mocking him about his ethnicity, telling him to “go back behind the wall.”

In response, Santiago said, the boy “quite astutely” pointed out, “We’re all immigrants, so what are you talking about?” But instead of diffusing the situation, “the other boys became violent” and threatened him.

“He pulled one of the teachers aside and said ‘I’m scared for my safety,” the lawyer said. “The teacher grabbed the attention of a security guard and they essentially sequestered my client’s son in a room for his own safety.”

Though the school appeared to see “the threat as very real,” Santiago said, Ruiz and her husband were not made aware of what happened until their son told them.

During the meeting with the school’s vice principal, the administrator admitted fault, telling the parents that “it slipped his mind” and “he should have contacted them,” Santiago said.

“That in itself is a woefully inadequate response,” he said, later adding, “If my son’s health and his well-being and indeed his life was in danger and the school knew about it and they failed to report it to me, someone dropped the ball. That is a failure on the school district’s part.”

It is not exactly clear what motivated the 13-year-old allegedly to go after Ruiz and her son, but the mother told NBC New York that the teen was swearing loudly when he approached the family on the street. Ruiz said when she tried to get him to stop, he told her to “shut up” and punched her.

By the time she regained consciousness and called the police, her attacker was gone, Santiago said. But it wasn’t long before Ruiz saw him again.

When Ruiz was released from the hospital, she and her husband took their son back to school only to discover that the teen was still attending classes “as if nothing had happened,” Santiago said.

“They spoke to the vice principal again and the response they received was, ‘Well, he has the right to an education just as much as your son does,’ ” Santiago said.

The teen was suspended only after Ruiz’s husband called Mayor Lora, Santiago said. Lora has not commented on his involvement.

It is unclear whether the other two boys present that afternoon have faced disciplinary action, though Santiago said they “tried to stop the 13-year-old.”

The school has also now offered to pay for the family’s medical bills, Santiago said.

“We do appreciate the gesture,” he said, “but at this point, it’s too little too late.”

Santiago said that while Ruiz’s physical injuries have started to heal, “her emotional wounds are slower to recover.”

“My son, he can’t sleep, and I don’t sleep because I am very worried,” Ruiz told ABC7 News.

In Tuesday’s statement, prosecutors made no mention of hate-crime charges, although that’s how Santiago categorizes what happened.

“This began by boys chanting that Mexicans should go back behind the wall,” he said. “What spurred them to threaten violence was [Ruiz’s son] advising that we all come from immigrants. … That anger triggered in this young boy enough hate and enough fury to attack a woman, an adult, with no fear.” 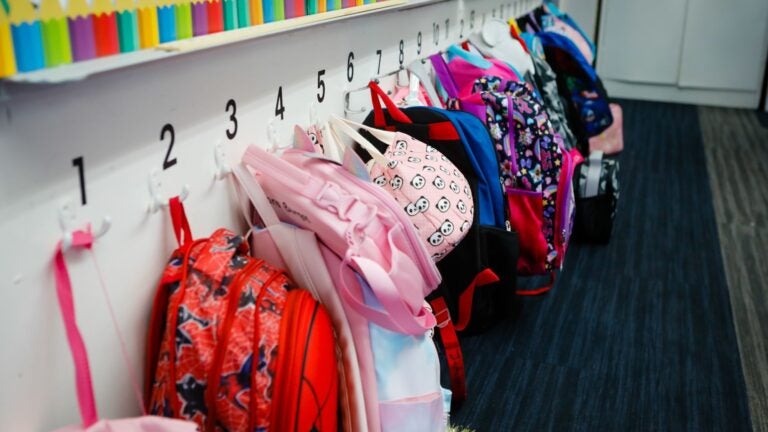