The FBI and New England Anti-Defamation League are now offering a reward of up to $35,000 for information leading to the person or persons responsible for at least three arsons that targeted local Jewish centers.

“Ending #Hate #Antisemitism means stepping up and calling @FBIBoston,” the ADL wrote in a tweet.

We are adding $15K to the reward fund. Someone knows who is responsible for 3 Intentional fires at synagogues in #ArlingtonMA #NeedhamMA Ending #Hate #Antisemitism means stepping up & calling @FBIBoston at 857-386-2000 pic.twitter.com/2AK4YgkVsM

In the span of five days in May, three fires were reportedly set at two Chabad centers in Arlington and Needham.

The fires took place at the Chabad Center for Jewish Life of Arlington-Belmont and the Chabad Lubavitch Jewish Center, which is also the home of its rabbi.

Investigators are looking for help identifying a male who appeared in surveillance footage from the nights. The male is about 5-foot-11 and wore a dark North Face jacket with the hood pulled over his head and khaki pants at the time of the first fire, which was set on May 11 in Arlington.

Footage from May 11 and 16 shows the male walking slowly near the locations where the fires were set while carrying unknown items in his hands.

“Two families shared not only their religious faith but the expectation of feeling safe in their own homes, were visited by menacing intentions,” special agent Joseph Bonavolonta said in a press release. “Although surveillance video has given us a promising start to this investigation, it will be the public’s eyes that help us bring justice home to them.”

Officials are asking anyone with information about these crimes to contact the FBI Boston Division at 857-386-2000 or submit a tip online at tips.fbi.gov. 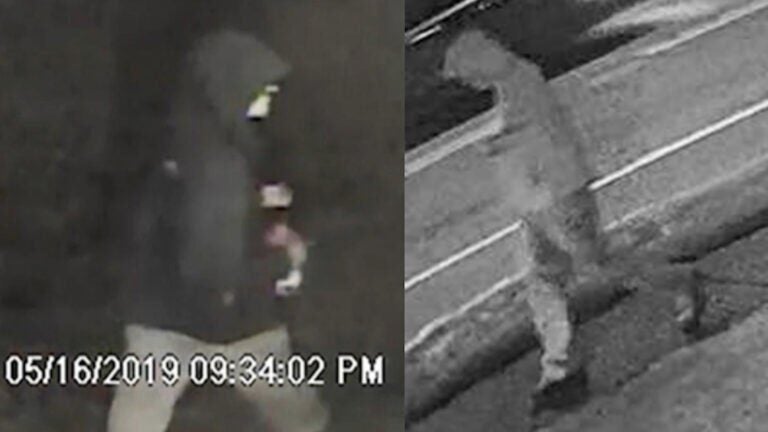