Two additional Hi-Way Safety Systems workers were arrested in the aftermath of the company’s holiday party, the same party that Gregory Goodsell left before allegedly driving drunk and striking another vehicle, killing a 13-year-old girl and injuring two other people on Dec. 29.

One of the employees, Francis Paiva III, 36, of Halifax, is being charged with allegedly driving drunk, while Omar Calderon, 31, of Flushing, New York, drew a disorderly conduct charge when talking with police in Rockland; police said they were talking with Calderon, who was staying at Comfort Inn on Hingham Street in Rockland, after they found another Hi-Way Safety employee “unresponsive” in his hotel room. That man, identified as Joseph Amaral, later died.

The two arrests are just the latest developments to surface surrounding the crash that killed Claire Zisserson, and injured her mother and her friend, Kendall Zemotel. Goodsell, who was found dangerous and is being held without bail, faces charges including manslaughter while driving drunk. He’s scheduled for a probable cause hearing on Feb. 10, according to the Plymouth County District Attorney’s Office.

More employees of Hi-Way Safety Systems arrested after company holiday party. This as police continue to investigate drunk-driving crash that killed 13yo #Plymouth girl. Latest on @NBC10Boston at 6pm. pic.twitter.com/0WeD9qS5Ju

In Paiva’s arrest, Hanover police were called around 3:20 a.m. on Dec. 29 for a report of a man and a woman arguing outside of a vehicle that was pulled over near 120 Elm St., according to a police report.

When an officer began speaking with Paiva, his eyes were reportedly red and glassy, and the officer could smell alcohol on his breath, the report said.

“He stated that he had just left a work party in Pembroke, where he got into a physical fight with two male parties … whom he did not know,” the report said. His employer is listed as “Highway Safety” on the criminal complaint.

Paiva told the officer that he wasn’t driving, but his girlfriend told police otherwise, and the car keys were in his coat pocket, police said. Paiva failed multiple sobriety tests. He’s being charged with operating under the influence of liquor, having an open container of alcohol in a vehicle – police found a bottle of vodka – and negligent operation.

We continue to break news on this Hi-Way Safety Systems party. That morning their employee Francis Paiva left the party only to be arrested for OUI. Court docs say police went to that house for a wellness check before Goodsell left & allegedly killed 13YO: https://t.co/fTgfoqZBcw pic.twitter.com/Shusg0gnee

For the incident leading up to Calderon’s arrest, police were called to the Comfort Inn around 7:50 a.m. for a man, later identified as Amaral, struggling to breathe, according to the police report. An officer administered Narcan and tried to use CPR; Amaral’s forehead was bruised, and he also had blood in his mouth.

This is Omar Calderon. According to court docs, he told Rockland police he & Joseph Amaral were at Hi-Way Safety Systems’ holiday party when a fight broke out. Morning after the party, Amaral was found unresponsive in hotel, Calderon was arrested for disorderly conduct @boston25 pic.twitter.com/TOTXZnwhdP

Police found out that there were “several” people staying in the hotel that might know Amaral, and they ended up knocking on the door to Calderon’s hotel room. When Calderon answered, he appeared drunk, police said. The officer asked him what went on before he arrived.

“He stated that they were at a company Christmas party (Hi-Way Safety Systems) and [a] fight broke out,” the report said. But then he overheard a police sergeant say “his boss was dead” to another person said to be a company employee. Calderon then allegedly began to “raise his voice,” and while police were attempting to get him to stop, other people at the hotel began emerging from their rooms.

“He continued to raise his voice, talking over us and refused to sit down on the bed right away,” the police report said. Calderon was then arrested on the disorderly conduct charge. 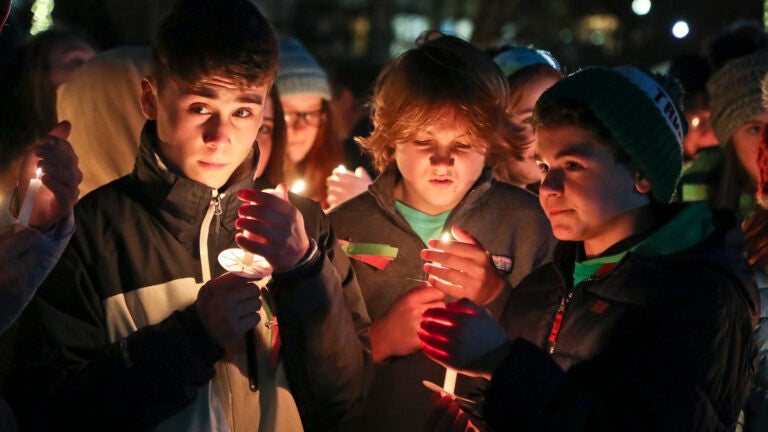