Thirteen-year-old Claire Zisserson was killed in a tragic alleged drunken driving crash on Dec. 29, and a Hi-Way Safety Systems employee was charged. Now, the company continues to face challenges as more has been revealed about what happened that night.

One employee was found unresponsive and died the morning after the company holiday party that 31-year-old Gregory Goodsell reportedly had attended before allegedly driving drunk; emails from the company management to employees indicate Goodsell stopped at a bar and a liquor store after attending the party. Another two employees were arrested in separate incidents following the party. The company has also lost its ability to bid on contract work for the state.

Here’s what we know about Hi-Way Safety, and everything that’s happened since the fatal crash:

Based in Rockland, Hi-Way Safety Systems, Inc. also has offices in Rhode Island and New York, according to its website. The company works with general contractors, state officials, and towns and cities, as well as private entities.

“For 30 years we have contributed to the safety of the driving public with high quality pavement markings, signage, traffic control operations, and sweeping services,” according to the website.

The company’s staff are “expertly trained,” and all have OSHA certification and American Traffic Safety Services Association training, the website says. Drivers have class B and C licenses, and technicians have flagger training.

“Hi-Way Safety Systems is a family owned and operated business, which allows us to provide a level of service that larger corporations cannot match,” the site says. “Our staff is friendly and responsive, and each staff member is deeply experienced in their particular area of road safety.”

The website homepage includes an ad for Blue Hills Bank, which features Kathy DeLong, the company’s president, and some questions and answers. One of those questions asks DeLong how she defines success.

“Having an organization that affects people in a positive way,” the ad says.

The aftermath of the fatal alleged drunken driving crash

Goodsell faces serious charges stemming from the fatal crash, including manslaughter while operating under the influence. He continues to be held without bail while awaiting a Feb. 10 probable cause hearing.

But an email to company employees indicates that, before the fatal crash, GPS data removed from the company pickup truck Goodsell was driving shows that he stopped at a bar and a liquor store in Marshfield after the work party at the Knights of Columbus in Pembroke, prior to heading to an after party, according to Boston 25.

Goodsell was using the company’s truck without authorization, the company said in a statement.

“Early on December 29, the employee was told by co-workers to relinquish the keys to the company vehicle,” part of the statement said, noting that he has since been fired.

Goodsell has a lengthy record of driving violations, according to RMV documents, including two crashes he was found responsible for.

In the fallout from the crash, the state Department of Transportation decided to cut ties with the company, and Hi-Way Safety can no longer bid on state projects. The state paid out $4.56 million to the company in 2019, and records show that the company has been paid by the state for work extending back to at least 2010, online records from the state Office of the Comptroller show.

Other issues continue to mount

Hi-Way Safety gained some notoriety last summer in Newburyport when it reportedly painted curvy lines onto High Street, which had just been repaved, according to The Daily News of Newburyport.

Newburyport Mayor Donna Holaday called it “poor workmanship,” and the company went back in September to remove the new lines from the street. This meant scraping the paint off, which caused grooves in the pavement. The city intended to work on getting $400,000 from the company so that the road can be re-paved this year, but Holaday told the newspaper she doesn’t know what will happen now that the company is moving through the aftermath of the fatal crash.

“We have filed with their insurance company a claim for High Street, but we’re working with our legal team at KP Law to figure out what to do about that because that road has to be fixed this spring,” Holaday told the Daily News. “I don’t know that a company can absorb a loss like this … what if they declare bankruptcy?”

Meanwhile, the same day Goodsell allegedly drove drunk, Joseph Amaral, another Hi-Way Safety employee, was found unresponsive in his Comfort Inn hotel room in Rockland around 7:50 a.m. on Dec. 29. Amaral was struggling to breathe when he was found, and authorities gave him Narcan and attempted CPR to revive him. There was blood in his mouth and bruises on his forehead, according to the police reports.

Police ended up speaking to Omar Calderon, another company employee also staying at the hotel. He told police there had been a fight at the holiday party, but started raising his voice and not listening to police orders, according to the police reports. He was later arrested for disorderly conduct.

Earlier that morning, police in Hanover went to speak with a couple reportedly arguing outside a vehicle around 3:20 a.m. They ended up arresting Francis Paiva III, another Hi-Way Safety employee, for allegedly driving drunk, among other charges.

A representative for O’Neill and Associates, which is handling media relations for the company, said that Hi-Way Safety declined comment on the two additional arrests, the state banning it from bidding on future contract work, as well as the job in Newburyport. 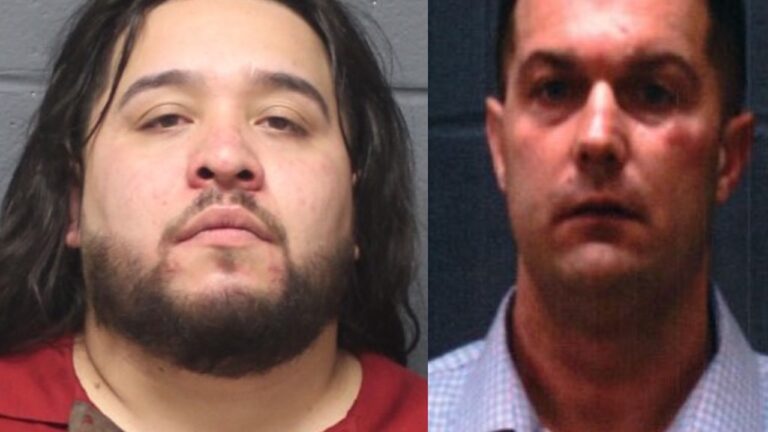