An openly misogynistic lawyer who is believed to have killed the son of a female federal judge in New Jersey had a list of more than a dozen other possible targets, including three other judges and two doctors, three people with knowledge of the matter said.

The list was found Monday inside a rented car on a rural road in the Catskills in New York, where the lawyer, Roy Den Hollander, 72, had killed himself.

Hours earlier, law enforcement officials believe, Den Hollander walked up to a house belonging to Judge Esther Salas on a suburban street in North Brunswick, New Jersey, and fatally shot her 20-year-old son when he answered the door. He also critically wounded her husband. The judge escaped unharmed.

Investigators have concluded that Den Hollander traveled eight days earlier by train to California to kill Marc Angelucci, 52, a men’s rights lawyer whom he considered a professional rival. Angelucci was also shot on his doorstep.

Esther Salas and Angelucci were included on the list found in the rental car, along with at least 10 other people with whom Den Hollander apparently had scores to settle, including three jurists: New York state’s chief judge, another federal judge in New Jersey, and a state judge in Manhattan who, like Salas, had presided over a case he brought.

Also on the list were two oncologists in Manhattan, at least one of whom had treated Den Hollander, two of the people said.

While his precise motive for making the list remains unclear, Den Hollander had received a terminal cancer diagnosis, and FBI agents this past week were exploring whether that news set him off on a mission of revenge against those he believed were his enemies.

This past week, officials acknowledged that information about two New York state judges and Salas was discovered in the rental car, and WNBC reported that investigators also found material about Angelucci and a doctor who had treated Den Hollander. But the existence of a list with more than a dozen names, including those of a second doctor and a second federal judge, has not been reported before.

Federal investigators believe Den Hollander, who had raged against women in thousands of pages of vituperative, online screeds, had dressed as a delivery man in the attacks.

An empty FedEx package addressed to Salas was also found in his rental car after Den Hollander’s apparent suicide, but a search of the car and his home failed to turn up a uniform, one of the people with knowledge of the matter said.

A highway worker discovered Den Hollander’s body at about 8 a.m. on a grassy pull-off outside the small town of Rockland, New York, about a two-hour drive from the judge’s home, according to a law enforcement official.

He was wearing a blue blazer, a green-collared shirt, gray slacks and black dress shoes, and he lay about 12 feet from the rental car, a 2020 Toyota Corolla. He had a single wound to his head. A Walther .380 pistol was next to him.

The FBI this past week contacted New York state’s chief judge, Janet DiFiore, to notify her that Den Hollander had her name and photo in his car, according to a spokesman for the New York court system, who said the other New York judge was also notified.

The two oncologists on the list also had been notified, a person with knowledge of the matter said.

Late Friday, the sheriff in San Bernardino County, California, where Angelucci was fatally shot at his front door, announced that detectives investigating the July 11 killing had determined that it had been committed by Den Hollander. (Previously, the FBI had described him only as a suspect and California authorities had said little.)

Angelucci was the vice president of the National Coalition for Men, a men’s rights group that had rejected Den Hollander.

Den Hollander traveled to California by train, arriving July 7. He then rented a car, drove it to Angelucci’s home and shot him, the sheriff’s office said. “After the murder, Den Hollander boarded a train at Union Station in Los Angeles and left California,” the sheriff said in a statement.

The pictures show him clad in a dark sports jacket, slacks and a collared shirt, wearing a mask. In one, he is pulling a rolling suitcase and has a briefcase slung over his shoulder. In the other, he is walking toward his luggage carrying a newspaper and a drink in a paper cup, with what appears to be a snack bar in the background.

The gun found near Den Hollander’s body Monday was a .380-caliber Walther semi-automatic pistol, the same caliber weapon that was used in the killing of Angelucci and the shooting that left Salas’ son dead and her husband wounded, law enforcement officials have said.

The judge was in the basement at the time of the shooting.

The authorities have conducted tests on the pistol to determine if it is the gun that was used in the two killings, several officials have said, but the results have not been made public.

Den Hollander described himself as an anti-feminist and had made a career out of filing lawsuits, some of them frivolous, alleging discrimination against men. He also published blog posts in 2006 arguing women were inferior to men and advocating physical violence against them. In one post, he said women should be strapped to missiles and dropped in the Middle East.

He sued Manhattan nightclubs for offering ladies night discounts and sued the federal government over a law that protects women from violence. He also filed a lawsuit claiming that Columbia University’s women’s studies program was unfair to men.

Den Hollander’s grievances against Salas and Angelucci apparently stemmed from the same case. In 2015, he filed a federal lawsuit in Newark challenging the male-only military draft, and the case was assigned to Salas. Angelucci had filed a similar lawsuit in another jurisdiction two years earlier.

Late last year, a federal court there ruled in Angelucci’s favor, finding that the exclusion of women from the draft was unconstitutional. The case is on appeal.

In his online writings, a bitter Den Hollander, well aware that Angelucci prevailed in his lawsuit, blamed Salas for moving too slowly with his case, insulting her and claiming that she was a beneficiary of affirmative action. 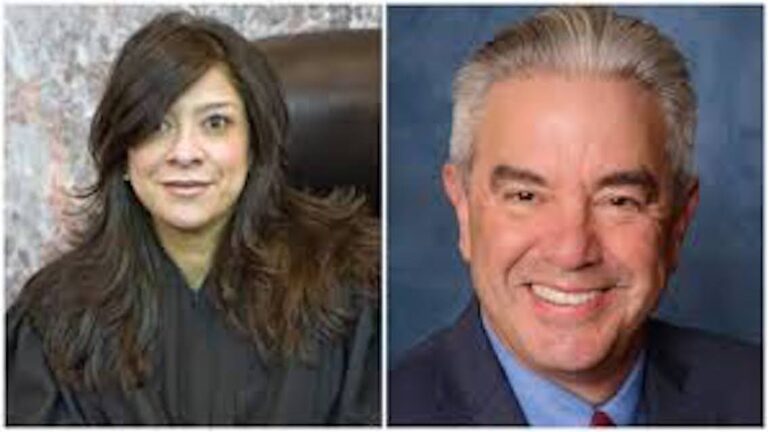