A 72-year-old mother of 11, who immigrated from Haiti to live the American dream, was killed in a hit-and-run crash Tuesday night in Brockton, her son said Wednesday.

Marie Rose Bien-Aime died after she was struck near 259 Pleasant St. around 6:16 p.m., according to Brockton police.

“Imagine yourself seeing your mother on the sidewalk,” Marc Bien-Aime, her son, told Boston 25 News. “I try not to cry.”

Bien-Aime said his mother was reading the Bible when he left their family’s house that morning. He remembered her as hardworking, but also as someone who enjoyed life.

“I don’t know how I’m going to explain (her death) to my brothers and sisters,” he told the news station. Many of his siblings live in Haiti. “As the first born in family, I have to be strong, to bring comfort.”

Just heartbreaking. Marie Rose Bien-Aime was killed last night after she was hit by a car in Brockton.💔 Her son gave me this picture of her and says his mom raised 11 children!

Police are still looking for the driver who hit her and left the scene. Watch @boston25 for updates pic.twitter.com/KIFwoxbaim

On Wednesday, police released a picture taken from surveillance video recorded near the crash site, appearing to show a green sedan leaving the scene.

Authorities asked for help identifying the “vehicle of interest” and noted that the car has a burned-out tail light and potentially front-end damage.

“If anyone can identify the vehicle, or if anyone was in the vicinity of Pleasant Street and Nye Avenue between 6 and 6:20 Tuesday night, please contact the Brockton Police Detective Bureau at 508-941-0234,” police wrote on Facebook.

Bien-Aime said he has to find answers, Boston 25 News reports.

“Right now I have to figure out what happened, why the driver didn’t stop,” he said. 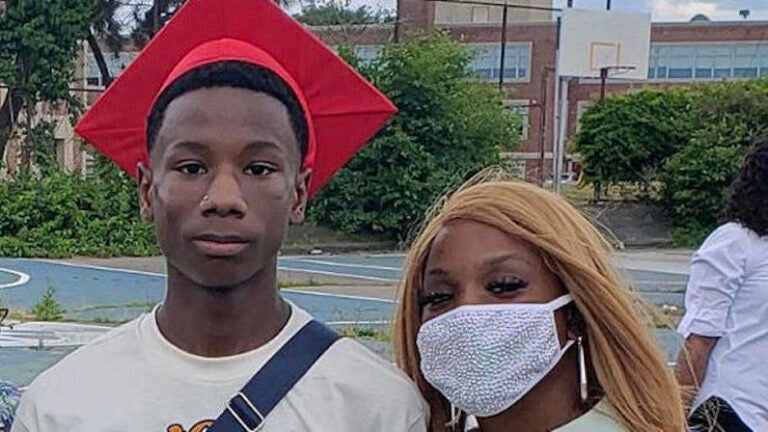