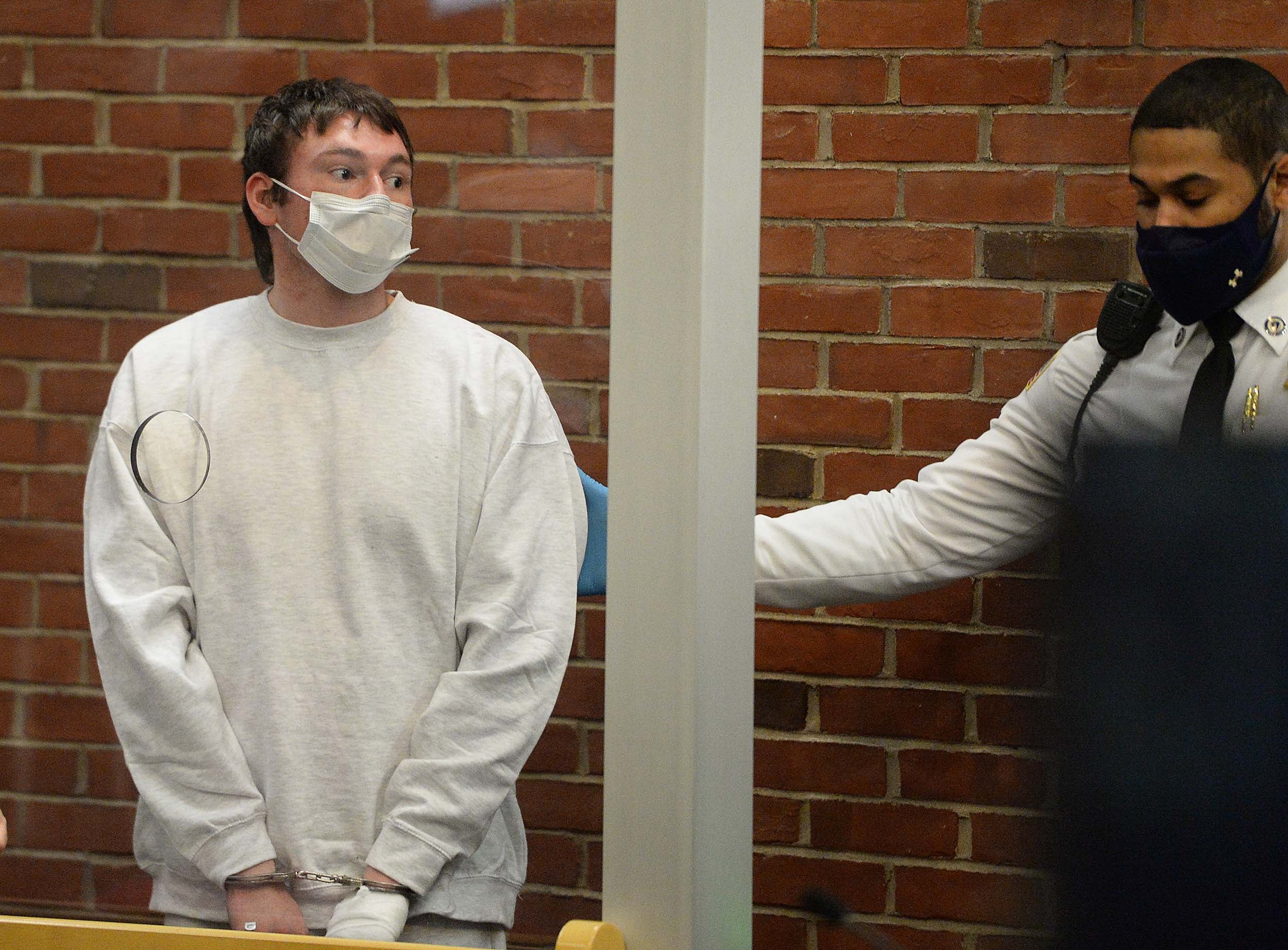 Ryan True, 21, of Middleborough, is arraigned in Wareham District Court on Friday.

The 21-year-old man charged with murdering his parents in their Middleborough home is being held without bail pending further evaluation.

Ryan True, who resided in the home with his parents, is being sent to Bridgewater State Hospital due to concerns of his competency raised during his arraignment in Wareham District Court on Friday morning.

True is facing two counts of murder in the deaths of his parents, Renee True, 55, and David True, 52.

Both of the older Trues were found dead in the home Thursday morning after one of David True’s coworkers called police around 6:30 a.m. asking for a well-being check after he didn’t show up at work, noting that this was “unusual” for him to not show up, according to Plymouth Assistant District Attorney Jeremy Beth Kusmin.

During the arraignment, Kusmin detailed the grisly scene officers found inside after being unable to make contact with the residents.

“They described it as a brutal and a very bloody scene,” she said.

When a Middleborough officer and a sergeant were able to get into the home at 3 Highland St. with the help of the fire department opening a side door, they “immediately” saw “reddish brown marks” on the floor, plus in the first-floor bedroom and an office. The marks, police believed, were blood. Blood was also found splattered elsewhere in the home, including on a wall, according to Kusmin.

When police entered the office on the first floor, they found a bed comforter on the floor. Pulling it off, they found the body of a man underneath; he had no pulse. Upstairs, police found a bloody footprint heading toward a bedroom. There was a second comforter on the floor of this room, and in pulling it off, the body of a woman was found. She, too, was dead, Kusmin said.

Police spoke with the defendant’s half-brother, who doesn’t live locally, around 9:33 a.m. He said that around 6 a.m. that morning, he had heard from the boss for David True, his stepfather, who said that his stepfather hadn’t shown up to work. He called his stepfather, mother, and half-brother, but no one answered. He then also called police for a well-being check. Then, around 6:49 a.m., Ryan True reportedly called him back. Ryan True allegedly told him that “things went bad” and that he was “the only one who left the house alive.” Ryan True’s half-brother also told authorities that the defendant had been diagnosed with autism as a child and that he had “refused” to take his medication. He said he wasn’t sure if Ryan had done anything violent in the past, according to the assistant district attorney.

After a brief investigation, police were able to make contact with Ryan True, who was in his mother’s vehicle not far from the home. He reportedly agreed to return to the home and told police he had a pocket knife with him but that he wouldn’t hurt anyone with it. Police took Ryan True into custody; a folding knife was seen inside the vehicle he was in, Kusmin said.

Back at the Middleborough Police Department, authorities interviewed Ryan True. He told them he and his father had gotten into an altercation around 5 p.m. Wednesday and that he had used his pocket knife as self-defense, stabbing his father multiple times, according to Kusmin. Soon afterward, his mother went into the home, and he allegedly said he stabbed her multiple times, too. The cuts he had on his hands, he said, were from the times he missed and accidentally stabbed himself versus his father.

Psychologist Daniel Richard was asked to interview Ryan True as concerns of his competency were cited. Richard told the court there could be an autism spectrum diagnosis and that the defendant told him he had been prescribed lithium in the past, which Richard said is usually used to treat bipolar disorder. Richard said that Ryan True told him he had been diagnosed with bipolar disorder in the past but that the 21-year-old disputes both of those diagnoses. 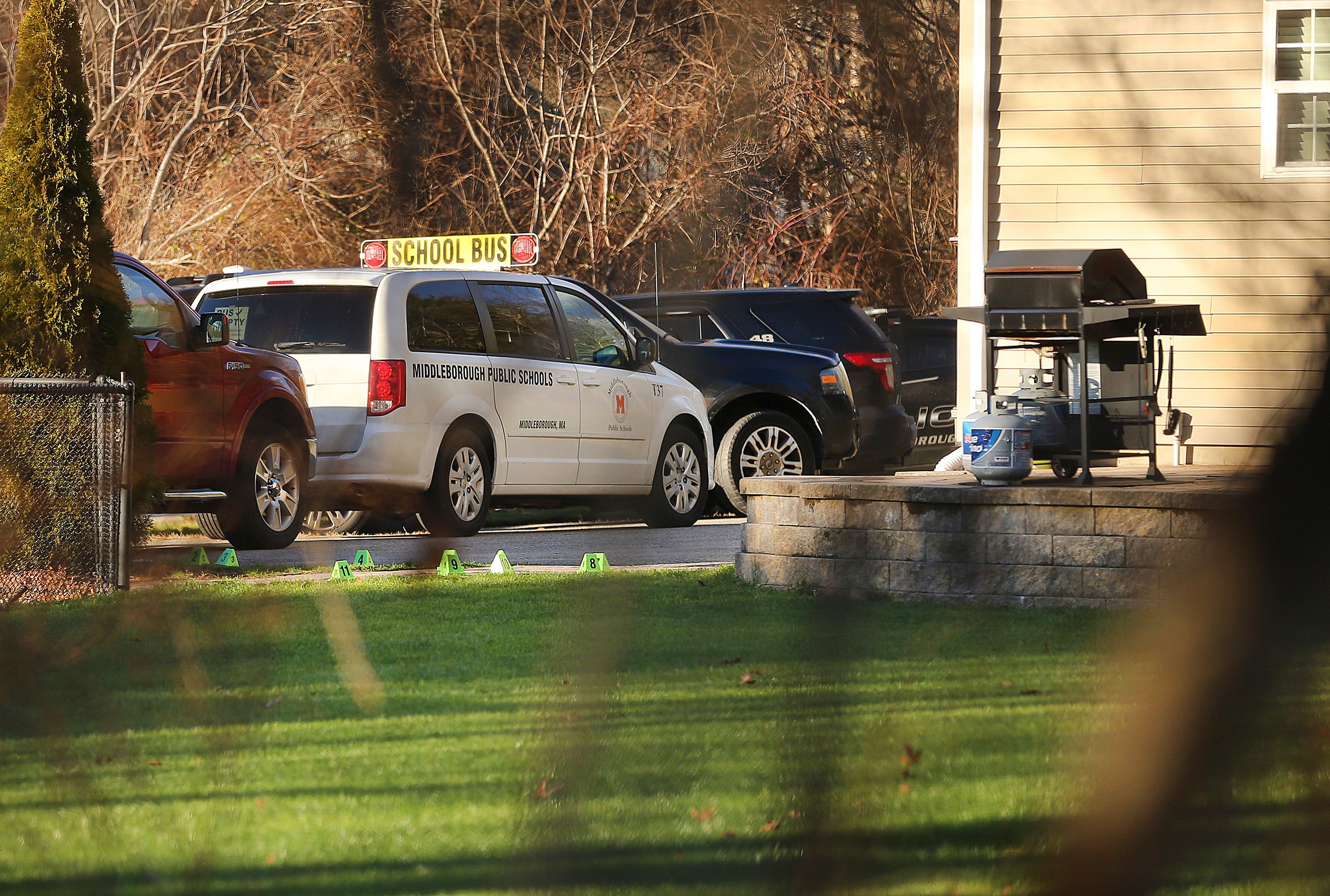 The scene of the double homicide on Highland Street in Middleborough.

‘Renee was a hard working and dedicated employee’

On social media, both employers of Renee and David True posted tributes to them.

Renee True had worked as a mini-bus driver, transporting special education students for the Middleborough school district. She had worked there since 2007, according to a Facebook post from the district.

“Renee was a hard working and dedicated employee,” Brian Lynch, superintendent of schools, said in the tribute. “It was clearly evident that she cared about every child she transported every day. She will be greatly missed by our transportation department and our entire school community.”

It is with sadness and regret that we inform you about the sudden loss of a member of our school community. On December…

David True worked for MCE Dirtworks, Inc., as confirmed in a Facebook post from the company, which also shared multiple pictures of him on the job. The post said the company is “heartbroken.”

“David True was truly one of the best men we have had the privilege of knowing,” the post said. “His charisma and passion for his work were contagious; a true leader. He will be sorely missed by all of us here and by anyone lucky enough to call him their friend. May he and his wife Renee find peace. We love you Dave.”