A federal court judge in Boston on Thursday ordered a leader of Super Happy Fun America — the group behind the Straight Pride Parade — to stay away from the Massachusetts State House following his arrest related to the siege of the Capitol building.

The directive was among several pre-trial release conditions set by Judge Jennifer Boal for Mark Sahady, of Malden, who was held in police custody since his arrest Tuesday by the FBI. Sahady is charged with knowingly entering or remaining in any restricted buildings or grounds without authority and disorderly conduct on Capitol grounds.

Prosecutors allege Sahady, a computer programmer, veteran, and vice president of Super Happy Fun America, was in the crowd that stormed the halls of Congress on Jan. 6 — a violent insurrection that left five people dead.

Sahady allegedly went to Washington D.C. on one of 11 buses organized by his group. His attorneys argued on Tuesday that Sahady went only to areas available to the public within the Capitol building and acted peacefully.

Suzanne Ianni, a Natick Town Meeting member who is active in Super Happy Fun America, was also arrested on the same charges.

But while prosecutors sought to hold Sahady on Tuesday, they rescinded the motion in court filings Thursday, just before a detention hearing was slated to be held.

Boal ordered that upon his release, Sahady must stay away from the Massachusetts State House; not attend any rally or demonstration without prior approval; not travel outside Massachusetts except for court matters in Washington D.C.; surrender his passport; and avoid contact with any possible victims, witnesses, and, unless an attorney is present, defendants in related cases, among other conditions.

Attorney Rinaldo Del Gallo III, who represented Sahady, raised objections to several conditions and argued those that limited his travel and his ability to participate in demonstrations infringe on his First Amendment rights.

“They don’t want him to talk about (former President Donald) Trump or an election that was not fair,” Del Gallo said, regarding the prosecution.

Assistant U.S. Attorney William Bloomer said the regulations are not an attempt to restrict Sahady’s political speech and are in line with court precedent and practice.

“These are reasonably calculated to ensure the safety of the public,” he said.

Del Gallo laid out his points in a court filing earlier on Thursday — arguments that Boal said “were somewhat unintelligible.”

Boal opted to impose the conditions for release.

“No one is saying Mr. Sahady can’t voice support for President Trump … in other ways,” Boal said.

The case will continue in federal court in Washington D.C. Sahady will appear virtually, with his first appearance anticipated for next week. 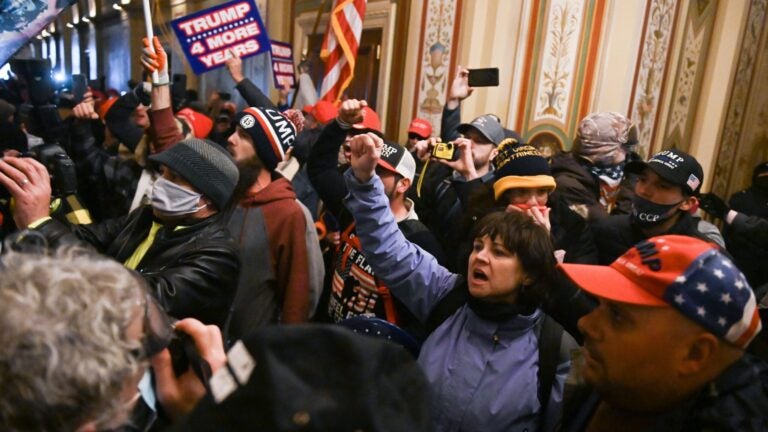