Three young adults, including one 16-year-old, have been charged in connection with intentionally setting the fatal February fire in Lowell that took the life of a 77-year-old resident, injured three tenants as well as three first responders, displaced over 50 other residents, and involved a dramatic rescue as a mother dropped her toddler from a second-story window to police officers on the ground who caught her.

Julian Boykins, a 20-year-old from Lowell, 16-year-old Alexander Gaye, of Lowell, and Dracut 19-year-old Tanya Karadanis, have been charged in connection with the three-alarm blaze ignited on Feb. 10, Middlesex District Attorney Marian Ryan announced alongside other local officials during a Thursday evening press conference at the police department.

Lowell’s police and fire departments responded to the fire around 3:13 a.m. at a home on 98 Westford St., where Ryan said residents were forced to leave the building with only the clothes on their back.

“The fire was in one building and spread to the adjacent buildings,” she described.

A third floor resident, Em Chak, died from the incident, while two firefighters and one police officer were injured, according to a news release.

Ryan said the State Fire Marshal’s office has determined that Boykins and Gaye allegedly used a cigarette lighter to burn a trash bag before leaving it ablaze in the back hallway of the multiple-story building.

“I wanna just call to mind not only the death and the tragedy that occurred,” she said, “But in a time when so many people are struggling, the impact not only on the three individuals who were hurt and hospitalized as well as the firefighters and police officers who literally risked their own lives to go into that badly burning building.”

As the investigation began, officials said they discovered surveillance footage in the area from the night of Feb. 10 showing Boykins and Gaye allegedly going into the back entrance of the Westford Street apartment building together seconds before the structure was engulfed in flames.

“That video also shows the same two men, Boykins and Gaye, leaving the scene of the fire in a small four-door sedan,” Ryan said.

Just about a week later on Feb. 17, police said they found more surveillance video of the same four-door car at a Merrimack Street gas station. Officers located the vehicle that day and reportedly arrested Boykins on an outstanding warrant for charges unrelated to the fire.

As the investigation continued, authorities said evidence revealed how the two men had allegedly traveled to the apartments intending to set the fire then flee the scene.

While Boykins was in custody, the D.A. said he was communicating with Karadanis, his girlfriend. Authorities said he allegedly instructed her to remove the SIM card from his cell phone and destroy it to get rid of evidence for the case. She allegedly agreed and has since been charged with evidence tampering and conspiracy.

Boykins and Karadanis were arrested Thursday at a Pawtucket Street residence without incident, Ryan said.

He has been charged with murder, arson of a dwelling, three counts of armed assault to murder, injury to a firefighter, intimidation of a witness, and conspiracy.

Gaye is facing the same charges as Boykins, other than conspiracy.

Ryan said officers are still actively searching for Gaye, and anyone with information on his location is urged to contact Lowell police. Authorities described him as a 5 foot 8 inch tall Black teen with a thin build. He is believed to be in the Greater Lowell area.

Boykins is expected to be arraigned Friday in Lowell District Court, meanwhile Karadanis has already been arraigned as of Thursday. Judge Ellen Caulo reportedly set her bail at $5,000 cash with conditions that she have no contact with any victims or codefendants, and submit to GPS monitoring with certain exceptions for work. 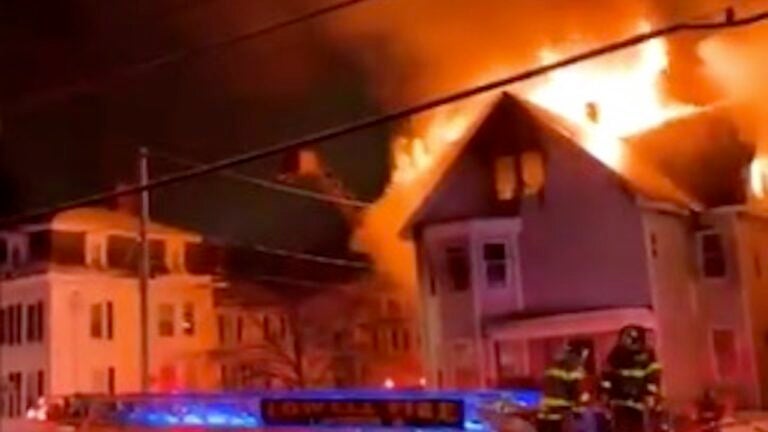