BOSTON (AP) — Four people, including a mother and her son, were charged Wednesday for their alleged roles in a drug ring that authorities say manufactured and distributed counterfeit prescription painkillers containing fentanyl, federal prosecutors said.

Vincent Caruso, 26, and Ernest Johnson, 33, both of Salem, face multiple charges including conspiracy to manufacture, distribute and possess fentanyl and conspiracy to possess firearms, according to a statement from the U.S. attorney’s office in Boston.

Laurie Caruso, 51, of Lynn, and Nicole Benton, 45, of Saugus, face charges including conspiracy to manufacture and distribute fentanyl.

“If Ms. Caruso is indicted or if probable cause is found to support the complaint (which has not yet happened), she will enter a plea of not guilty to the charges and defend against the charges,” Caruso’s attorney, Tracy Miner said in an email.

Johnson’s attorney, Kevin Barron, said in an email he had no comment. Emails seeking comment were left with attorneys for the other suspects.

A fifth suspect already in custody was also charged.

The defendants had multiple pill presses, including one capable of generating up to 15,000 pills per hour, which they used to produce counterfeit Percocet pills containing fentanyl, which was then distributed to suppliers north of Boston, prosecutors said.

Vincent Caruso, a self-described member of the Crips gang, and Johnson posted images and videos on social media with guns, drugs and high-end jewelry, prosecutors said.

According to court documents, one counterfeit pill can sell for $10 to $20 on the street, meaning the defendants potentially generated millions of dollars in sales. 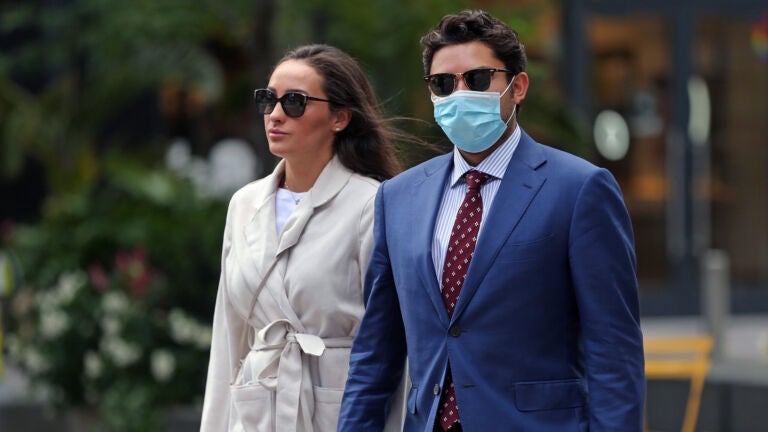