A rabbi was stabbed outside of the Shaloh House Chabad Center in Brighton, as confirmed by the Anti-Defamation League of New England.

The victim, identified by the organization as Rabbi Shlomo Noginski, is said to have suffered non-life-threatening injuries, Boston police said in a press release.

Police have since identified Khaled Awad, 24, of Brighton as the suspect in the stabbing. He’s being charged with assault and battery by means of a dangerous weapon, and assault and battery on a police officer, police said. His arraignment is set to take place in Brighton District Court.

“This afternoon’s horrific stabbing of a rabbi outside of Shaloh House, a sacred house of worship and Jewish Day School in Brighton, M.A., has sent a shockwave of fear and anxiety throughout the community,” Robert Trestan, ADL New England regional director, said in a press release. “We pray for the recovery of Rabbi Shlomo Noginski. We are grateful for the rapid response of Boston and Brookline Police and emergency responders. Healing from this incident will require accountability, justice, and answers.”

Rabbi Noginski serves as a Rabbi and teacher at Shaloh House, according to a statement from Chabad Lubavitch Headquarters. He was allegedly approached by a suspect who pulled out a gun and tried to force him to his vehicle. A struggle followed, and the suspect then allegedly stabbed the Rabbi.

Police were called to the area around 1:19 p.m. and found the victim on Chestnut Hill Avenue “suffering from multiple stab wounds.”

“I am grateful to the Boston Police Department for their rapid response, and relieved that the perpetrator is in custody,” the Rabbi told the Chabad Lubavitch Headquarters from his hospital bed. “I am looking forward to returning to my work as soon as possible.”

Shaloh House Director Rabbi Dan Rodkin said the organization has heard from many concerned members of the community since the attack.

“We are all very shaken by what happened and ask for you to please keep Rabbi Noginski in your prayers,” Shaloh House director Rabbi Don Rodkin said in a statement to Chabad.org. “We are heartened by the outpouring of concern and compassion we have received in just the last hours since the incident.” 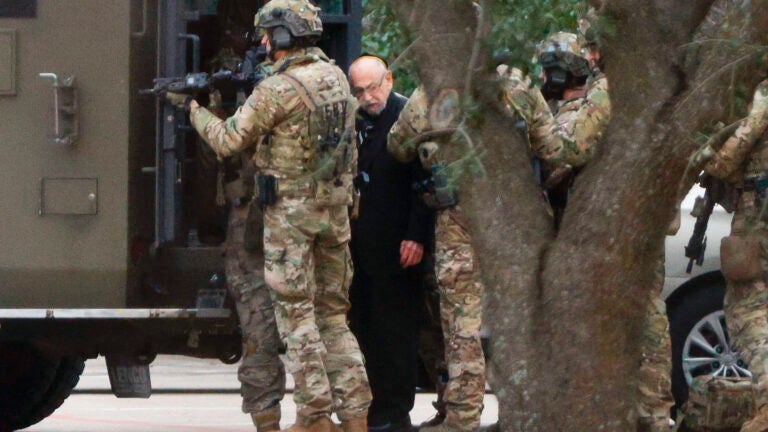 Texas rabbi describes how he and 2 hostages escaped synagogue standoff