As a woman was being raped on a train near Philadelphia on Wednesday night, riders watched, failed to intervene and did not call 911, authorities said.

A man whom officials identified as Fiston Ngoy sat down next to a woman at about 10 p.m. on a train that was traveling westbound on the Market-Frankford Line toward the 69th Street Transportation Center. Ngoy “attempted to touch her a few times,” said Andrew Busch, a spokesperson for the Southeastern Pennsylvania Transportation Authority, known as SEPTA.

The woman pushed back and tried to stop Ngoy from touching her, Busch said. “Then, unfortunately, he proceeded to rip her clothes off,” Busch said Sunday.

The assault lasted about eight minutes, and no passengers in the train car intervened, authorities said.

“I’m appalled by those who did nothing to help this woman,” Timothy Bernhardt, superintendent of the Upper Darby Township Police Department, said Sunday. “Anybody that was on that train has to look in the mirror and ask why they didn’t intervene or why they didn’t do something.”

Ngoy, 35, was charged with rape, sexual assault and aggravated indecent assault without consent, among other crimes, court records show.

Several passengers were in the train car, but Bernhardt declined to say how many; investigators were still working to determine the exact number, he said. Although there were not “dozens of people” in the car at the time, Bernhardt said, there were enough that, “collectively, they could have gotten together and done something.”

He added that investigators had received reports of some passengers recording the attack on their phones but that the police had not confirmed those reports.

Eventually, a transportation authority employee got on the train, saw what was happening and called 911, Busch said.

Then, a “police officer ran onto the train and caught this man in the act and took him into custody,” Busch said.

The surveillance footage that the authorities are reviewing does not contain audio, Bernhardt said. But based on the footage that he had reviewed, it was clear that passengers had an opportunity to intervene, he said.

Bystanders on the train who failed to intervene could be criminally charged if they recorded the attack, Bernhardt said, adding that it would be up to the Delaware County district attorney’s office to make such a decision after the police finish their investigation and submit their findings. 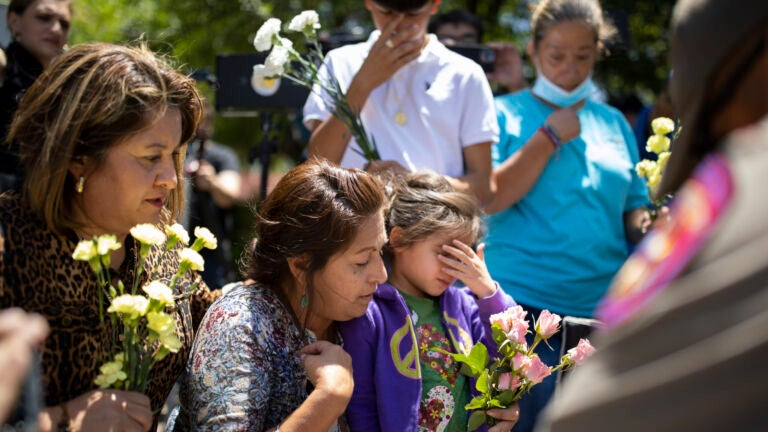 Governor: Texas gunman said he was going to shoot up school