A man who allegedly robbed a bank in York, Maine and then fled on foot after crashing his vehicle in Salisbury on Monday, was caught by police in Peabody Wednesday morning.

Danvers and state police worked together to apprehend the fugitive Brandon Simmons, 34, after the stolen vehicle was spotted by local police, according to the Massachusetts State Police.

On Monday morning, Simmons, whose last known address was in Seabrook, N.H., allegedly robbed a bank in York, Maine and escaped in a white van. That evening, a Salisbury officer noticed the van and attempted to arrest Simmons. According to Salisbury Police, Simmons “struck the officer in the face and attempted to flee,” and though the officer struggled with him to keep the car in park, Simmons eventually sped off.

A chase followed, but was called off when police decided it had become “too hazardous to continue.” Not long after, Simmons crashed his van into another vehicle, and fled into a nearby residential area on foot. The driver of the other vehicle was taken to Anna Jaques Hospital with non-life-threatening injuries.

Police led a search for hours, but called it off around 9 p.m., authorities said.

According to a release, a Danvers officer saw Simmons driving and attempted to stop him, but Simmons refused to stop and drove away. Agencies flooded the area looking for him, and a state police trooper saw the stolen vehicle Simmons was believed to have been driving in the parking lot outside the Homewood Suites hotel on Route 1 in Peabody.

Officers with the Massachusetts State Police Violent Fugitive Apprehension Section found Simmons in the lobby. According to police, Simmons “violently struggled…in an attempt to evade arrest” but he was taken into custody.

He was booked and arraigned in Newburyport District Court in connection with a prior robbery at a Newburyport CVS, and will be summoned to Peabody District Court at a later date on Wednesday’s charges. Simmons is also wanted in Maine for the bank robbery, but the FBI is overseeing that incident. 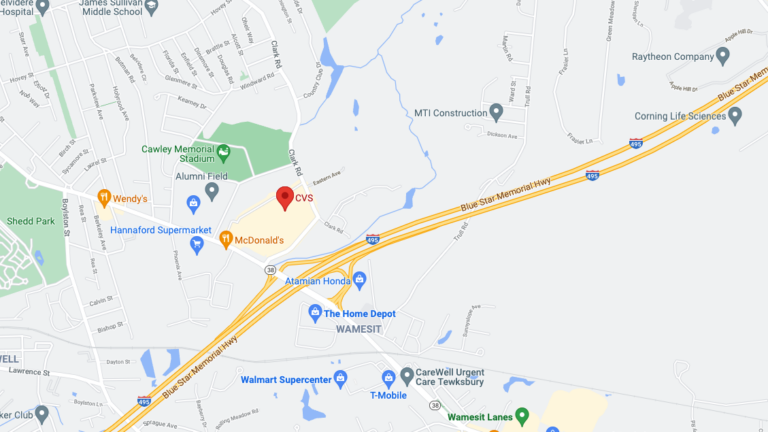