Police are searching for suspects after thieves burglarized multiple Massachusetts jewelry stores in a recent wave of smash-and-grab robberies.

The brazen thefts follow a nationwide rash of smash-and-grab crimes that have plagued high-end shops in major cities like San Francisco and Chicago. During smash-and-grabs, thieves use objects like sledgehammers and bricks to literally smash their way into a store, and in some cases, through glass display cases housing expensive goods.

Smash and grab crimes tend to spike around the winter holiday season, according to experts.

The most recent local smash-and-grab happened in Everett around 6 a.m. Thursday, when at least one person forced their way into Gold N’ Oldies Jewelry and Antiques on Revere Beach Parkway.

The store owner, Conrad Casarjian, who’s had the business for 36 years, told authorities it was the first time he’s experienced a break-in. The thief stole a few hundred dollars worth of rings, and as of Thursday evening, was still at large.

Casarjian’s message for the suspect: “Get a job.”

Longtime Everett jewelry store owner with a message to the thugs involved in a smash and grab at his business early this morning…”Get a job” #7news pic.twitter.com/DioZL5UfGG

Days earlier, multiple thieves targeted jewelry stores in Medford and Burlington. In those incidents, between eight and nine assailants smashed their way into the shops and made off with pricy merchandise.

Roland Racicot, owner of Roland’s Jewelry in Medford, said between seven and nine thieves swarmed his shop around 6 a.m. Sunday, Dec. 12, and stole $15,000 worth of watches in just four minutes.

“This is not Rodeo Drive. This is a blue-collar community,” Racicot told local media outlets.

The 80–year-old jeweler said the thieves can be seen on surveillance footage, though it was hard to make out their appearances.

“It was like a clown car. They all came out and you couldn’t tell because they were all dressed up like ninjas,” he told Channel 7.

Around the same time, a Burlington jeweler just eight miles away suffered a nearly identical invasion, Channel 5 reported. In that robbery, eight to nine suspects smashed their way into the business and shattered display cases with hammers before making off with fistfuls of jewelry.

As of Thursday night, no arrests had been made in either incident.

Racicot told Channel 5 that he’d heard of a few other smash-and-grab robberies that same weekend.

Burlington Police Lt. Det. Michael McDade said investigators are focusing on preventing such crimes: “I’m concerned that we have a lot on our plate here and I’d hate to see a violent confrontation. The stakes are pretty high.”

Smash-and-grab thieves typically enjoy power in numbers, with one California robbery netting $100,000 in merchandise and suspects fleeing in 25 separate cars.

Some retailers are taking precautions against the trend, with one Los Angeles shop installing a high coil fence that resembles barbed wire at its entrances.

Local authorities are urging anyone with information about the crimes to contact police. 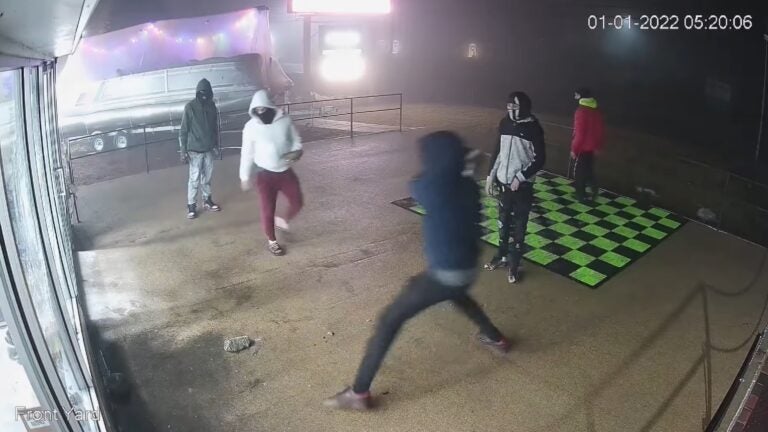